TUSD On Track to Bring Kids Back to Campus After Spring Break But "Teachers Are Not Happy"; Marana and Amphi Also Weighing Changes to On-Campus Options 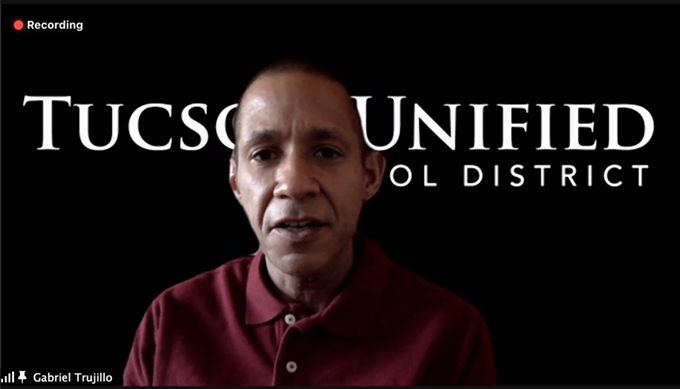 Tucson Unified School District
TUSD Superintendent Dr. Gabriel Trujillo: “I don't think it's any secret that our teachers are not happy.”
TUSD remains on track to reopen its schools on Wednesday, March 24, for the first time since it went to remote learning after the March 2020 spring break.

“I don't think it's any secret that our teachers are not happy,” he said. “They're very concerned right now about coming back.”

Trujillo said the district would be surveying employees and hoped that many of their concerns would be worked out before students return to campus.

Trujillo also said that the district would extend a Feb. 28 deadline for parents to choose their learning option to March 7 because more than four out of 10 parents have yet to make a choice about whether they want to return to school or remain remote.

“If this trend holds up for the remaining 41%, it looks like we're going to be an even 50/50 split, in terms of a district that has half of its student body studying remotely and half of it studying in some sort of in-person learning opportunity,” Trujillo said.

For elementary schools grades K-5 and three K-8 schools (Drachman, C.E. Rose and McCorkle), there are two options available: either attend full-time on-campus Monday through Friday or remain 100% remote. High schools and middle schools, grades 6-12, also have two options. A parent can choose to have their child stay 100% remote or four half-days of in-person learning, meaning students will be on-campus in the morning and remote learning in the afternoon, with Wednesday as 100% remote learning.

Trujillo said the district also came to an agreement with the Tucson Education Association and the Educational Leadership Institute to allow teachers to simultaneously teach both in-person and remote learning students at elementary schools.

“[This] would eliminate the need for any schedule changing that has been a big concern from parents, from teachers and from principals,” said Trujillo. “This new option is going to require a supermajority of each campus's teaching community, 80%, to be able to have a particular school declared campus-wide simultaneous teaching sites.”

However, high schools and middle schools do not have this option as they are required by the state to show 720 hours of instruction through their bell schedules.

Trujillo also confirmed that TUSD would be receiving $76.4 million in ESSER funds through the CARES Act, which he said would be invested in their “students’ academic recovery efforts” as well as “all COVID-related expenditures,” including masks, hand sanitizer, plexiglass, a new learning management system and possible upgrades to HVAC systems.

Trujillo said the board would discuss the proposed three-year spending plan at upcoming meetings.

Other school districts are also working toward resuming more on-campus activity as COVID cases in Pima County continue to decline from the winter surge.

Marana Unified School District is planning to move to full five days of in-person instruction as of March 22, while keeping remote learning as an option for families. However, the district is still coordinating with schools and aims to confirm the March 22 return date next week, said Alli Benjamin, Director of Public Relations and Community Engagement for Marana.

The nearby Amphi School District, which now has a hybrid program with students attending two days a week and working remotely three days a week, is still considering when to have students back on campus five days a week.

“A lot of people, of course, given the actions of other school districts across our community, are asking the $64,000 question,” said Superintendent Todd Jaeger at the Amphitheater School District’s board meeting on Tuesday, Feb. 23. “‘Can that be, for example after spring break, on March 22?’ The truth is, as I sit here right now. I still don't know.”

Jaeger said the Amphi staff is looking into phased-in approaches or a full reopening and will be sending out another survey to families as well as looking for input from staff, including not only teachers, but “our custodians and our groundsman and carpenters and whoever supports the operations of our schools.”

Jaeger noted that returning to full in-person learning depends on the vaccination progress as well and said their district is ahead in the percent of vaccinations.

The Arizona Department of Health Services has outlined three benchmarks that they recommend be met in order to shift to full traditional/in-person learning: fewer than 10 COVID-19 cases per 100, 000 people, two consecutive weeks with below 7% percent positivity (the percent of positive tests) and two consecutive weeks with hospital visits for COVID-like illness somewhere below 10%.

For the week of Jan. 31 (because of lagging data collection, the report is always two weeks behind), Pima County saw 237 cases per 100, 000 individuals, 11.3% positivity on tests, and 6.6% of reported hospital visits for COVID-like illnesses in the region. All three benchmarks show steady decline.

"In fact, this week I believe we have the first week where we are going to be pretty darn close to either 100, (or) have less than 100 cases per 100,000,” said Dr. Francisco Garcia, Pima County Chief Medical Officer. “You want to be in that area for two weeks in a row in order to be in this yellow zone.”

The “yellow zone” refers to the benchmarks at which hybrid learning is recommended. The “green zone” would be the target for schools in order to return to in-person learning.

“Green zone is when they say in-person is fine,” Garcia said. “So everything is trending in the right direction.”

Garcia said another key was vaccinating teachers and support staff.

“A very substantial proportion of K-12 educators have been vaccinated,” Garcia said. “It's a hard number for us to sort of get in a precise count. But we believe that somewhere close to 75 to 80% of folks, essentially, have gotten at least the first dose or are scheduled to get the first dose in the near future.”