Sedentary and stressed? Get outside to improve health during COVID, experts advise 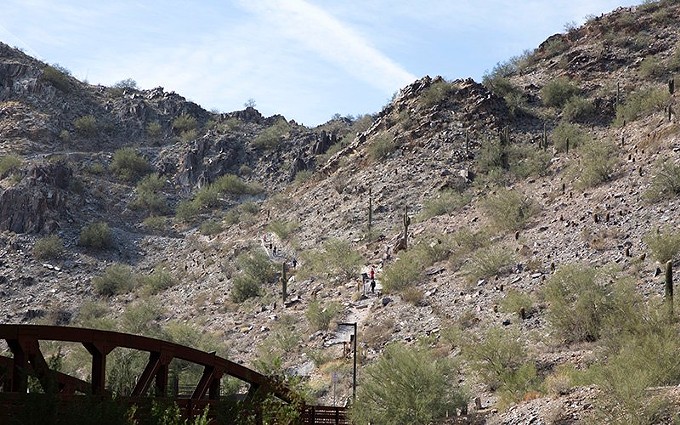 James Paidoussis/ Cronkite News
Hikers on the Mesquite trail at Piestewa Peak on Wednesday, February 3, 2021. The park has remained open throughout the COVID-19 pandemic.

PHOENIX – Nearly a year of isolation and widespread closures has harmed the mental and physical health of many Americans. But Arizona state parks saw record visitation over parts of 2020 – a positive sign to experts urging people to get moving and get outside as COVID-19 continues to spread.

Doctors have long touted the benefits of physical activity for overall well-being, but studies have determined that simply being outdoors also can have benefits.

Research shows that spending time outdoors can reduce stress and help alleviate anxiety and depression. One 2019 report found the stress hormone cortisol dropped significantly by spending just 21 to 30 minutes in nature, even in urban areas. A 2015 study found a 90-minute walk in nature could decrease activity in the part of the brain associated with depression.

Sandy Slater, an associate professor at Concordia University in Wisconsin, has long researched the connection between parks and green spaces and public health.

“When you have access to parks and green space, it just gives you a place to be able to maintain physical activity,” Slater said. “You also have that added benefit of there being that positive association between improved mental outcomes and being in those spaces.”

Slater’s report noted that stay-at-home orders, and their effect on physical activity, could disproportionately harm vulnerable populations and people of color. African Americans and Hispanics have higher rates of COVID-19 infection and tend to live in urban areas with less green space.

“Having a kind of public space that allows everyone in the community to be able to get out and be physically active is important,” she said.

When Arizona Gov. Doug Ducey issued a stay-at-home order last spring, most state parks, with the exception of historic parks, remained open because they are considered essential to the state’s operation. Many city and county parks stayed open, too.

With the Grand Canyon and many other national parks closed for at least part of 2020, state parks saw the highest visitation since 1991 last May, October and December, and September saw more park visitors than in 2019, according to Michelle Thompson, spokeswoman for Arizona State Parks & Trails.

“It’s clear from our visitation that people highly value these open, outdoor spaces,” she said in an email. “Getting outside remains one of the safe activities, and exercise has long been considered vital for mental health.”

Thompson added that there was an increase last year in first-time park visitors and in annual pass sales, “indicating that more people are seeking the outdoors for family-friendly activities during the pandemic.”

Data show most of these visitors are from Arizona.

“Arizonans, by far, make up the largest portion of visitors to other places in our state, parks included,” Josh Coddington, a spokesman for the Arizona Office of Tourism, said in an email.

Across the 30-plus state parks and recreation areas, a mask mandate remains in place inside buildings and within outdoor areas where social distancing isn’t possible, as do capacity limits.

Since the pandemic was declared last March, studies have found increases in sedentary behavior as well as stress and mental health problems.

A September 2020 study published in the International Journal of Environmental Research and Public Health examined changes in sedentary behavior due to COVID-19 restrictions and the impact on mental health. Of the nearly 3,000 adults surveyed, participants who reported a decrease in physical activity also reported higher levels of depressive symptoms, loneliness and stress, compared to those who maintained a physically active lifestyle.

The correlation between exercise and improved physical and mental health is well-established, note experts like Richard Christiana, a professor at Appalachian State University who co-authored the 2020 report with Slater and who has researched how being outside benefits children specifically.

Outdoor activities “can reduce the symptoms of childhood stress, ADHD, and (lead to) overall increased feelings of well-being in children,” he said in an interview. That stress reduction can also ease symptoms of depression and anxiety in people of all ages, he said.

Jenna Graham, a Yale University student living near Phoenix, says she frequently heads to Piestewa Peak in central Phoenix, to get in her daily exercise. She described her mood on the trail as relaxed, adding that she sometimes listens to university lectures on her way up the mountain.

“I usually come out here to clear my mind,” she said. “And the view is really nice. Can’t beat it.”