Kiersten Moss/Cronkite News
Lupe and Saul Solis, who were recently inoculated, relax in their Chandler home on Feb. 17. Seniors make up more than half of the people in the state who have received at least the first vaccine dose.

Lupe Solis’ prayers were answered when she received her second dose of COVID-19 vaccine recently at the State Farm Stadium mass vaccination site in Glendale. Now the 77-year-old is being cautious and patient, waiting to worship in person again at St. Timothy Catholic Church in Mesa.

“Prayer takes up a big part of our life,” Solis said. “We cannot participate in church activities. I will not feel safe now.”

Some churches have resumed in-person worship in Arizona, but Solis, who lives in Chandler, is still playing it safe after receiving both doses of the Pfizer vaccine.

Like so many of the nearly 1.3 million Arizonans 65 or older, Solis has adjusted to the safety precautions that have upended life since the onset of the pandemic. With COVID-19 ravaging Arizona’s senior community, many long to return to normal activities but remain apprehensive.

As of Friday, more than 11,500 Arizonans 65 or older have died from COVID-19 since the start of the pandemic, with a majority of those deaths in Maricopa County, according to the Arizona Department of Health Services. Now, in accordance with phase 1B of vaccine rollout, the state has been doing what it can to get vaccinations to the older population as quickly as possible. Seniors make up more than half of the 1,027,816 people in the state who have received at least the first dose.

Pharmaceutical makers Moderna and Pfizer have said their vaccines are effective in fighting off the coronavirus that causes COVID-19 in people displaying symptomatic illness, but it remains unclear how effective the vaccines are in curbing the asymptomatic spread of the virus, the Associated Press reported.

Solis and other seniors who have received both doses of the Pfizer vaccine are considered to have lowered the risk of catching the symptomatic version of the disease by up to 95%, according to the Centers for Disease Control and Prevention. That level of immunity doesn’t kick in until one to two weeks after the second dose is administered.

Solis hasn’t been able to see either of her sisters or their families in El Paso, Texas, in more than a year, and she hasn’t felt safe traveling during the pandemic given her age. She is hopeful that they can meet after a safe amount of time has passed from vaccinations.

“After waiting for a month, we’re probably going to plan on seeing each other somewhere,” Solis said. “We still are going to be very leery and wary, you know, of starting anything new because so far we’ve all been able to stay healthy.”

For now, Solis has had to keep in touch with them through a weekly family prayer over Zoom, which allows them to stay “together in spirit” and keep in touch.

States have differing quarantine protocols for individuals traveling across state lines, with some states enforcing mandatory quarantines for travelers. Travel rules can be found on the CDC’s website.

Dr. Josh LaBaer, executive director and professor of the ASU Biodesign Institute, said vaccinated individuals, even seniors, should be able to safely interact with each other once the vaccine takes full effect.

“People who are vaccinated can interact with each other in the way that they did in the past, without masks, you know, pretty much, close quarters,” LaBaer said at a news conference Wednesday.

“They’ve been deprived of social interaction for many, many months and I think that’s not healthy for anybody. They ought to be able to get back and interact again.”

Dan Martinez is another recently vaccinated Arizona senior with hopes to reunite with family in the coming months.

The West Valley resident, who received his first dose of the vaccine on Jan. 23 at State Farm Stadium, is already making plans to visit family after his vaccine kicks in and infection rates drop.

“We’ve written down things we want to do in terms of traveling to see family,” Martinez said. “We are going to try to get that done once we get our second shot and things calm down nationally. We want to see case numbers drop, hospitalizations drop, death numbers drop, because we don’t want to take too much of a chance.”

Part of the 75-year-old’s caution stems from a recent bout that his daughter living in Washington, D.C., had with COVID-19. She and her husband contracted the coronavirus in January, a few weeks after visiting Arizona for the holidays.

“She got very sick. She had temperatures of 104, chills and was very weak,” Martinez said. “She was having pain in her stomach when she moved around. She was lying down in bed. And so she had a rough go of it and she’s only 44 years old.”

Martinez is taking proper precautions but hopes he gets to be with loved ones soon.

“And so we’re hopeful that being vaccinated will get everybody some protection,” he said. “So we can make a few trips and hug a few people and kind of reminisce about the last year or so.”

Arizona Gov. Doug Ducey and state health officials say they are doing what they can to make such reunions possible. The state has prioritized people 65 or older for vaccination, to varying degrees of success in their rollout.

One of the first Arizona seniors to receive the COVID-19 vaccine was Dr. Leonard Kirschner, who had completely adapted his lifestyle to the pandemic before getting the first dose of the vaccine on his 85th birthday Jan. 16.

After being a jet-setter who has clocked more than 200,000 frequent flyer miles in a year, Kirschner, like many other Arizona seniors, has adopted more of a subdued lifestyle.

“I canceled trips to Portland, Seattle, Boston and two trips to Washington, D.C., So I haven’t been on an airplane in almost a year now,” Kirschner said. “It’s been since February of last year. I’ve had years where I’ve had 200,000 air miles traveled. That’s a real change in my lifestyle.”

Kirschner, who received his master’s in public health from Harvard in 1968, wasn’t surprised that a pandemic broke out, as he had lived through and studied multiple outbreaks. But he was surprised and encouraged to see the COVID-19 vaccines produced so rapidly.

“I was not convinced a year ago that we would have vaccines by the end of 2020 because I know how difficult it is to develop the vaccines,” he said. “I’m very optimistic. If you look at the history of epidemics, plagues, and pandemics around the world, they run their course, and then they disappear.”

Kirschner was excited to receive a dose for his birthday, maybe the most practical gift possible considering the circumstances of the last year.

“I figured I would try to get a shot on my 85th birthday, which would be Gov. Ducey’s birthday present to me,” he said.

PPE trash, plastic – and feces – mar many beaches and scenic spots across the Southwest 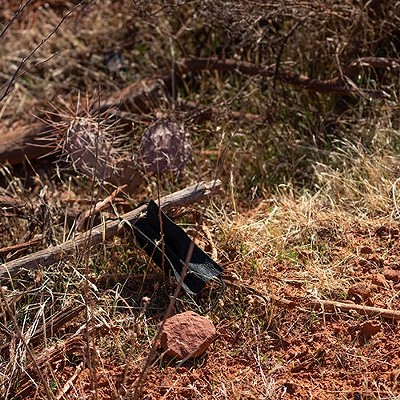