The realism of imitation firearms: Who benefits and who suffers?

Posted By Henry Greenstein, James Franks, Payton Muse and David Payne/Special for Cronkite News on Mon, Feb 15, 2021 at 6:57 AM 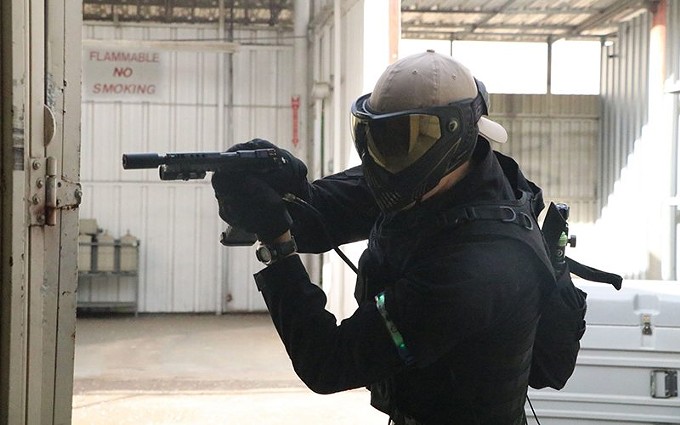 Payton Muse/Special for Cronkite News
An airsoft player points an imitation gun around a corner at Dreadnought Airsoft in Phoenix on Nov. 22. The player has removed the fake gun’s orange tip.

Tempe police responded to a 911 call on Jan. 15, 2019, about a suspected burglary in an alley. Officer Joseph Jaen arrived to find Antonio Arce, sitting in a truck with a handgun.

Jaen called to Arce, 14, who turned and ran. “Let me see your hands!” Jaen yelled, but Arce continued running, and Jaen shot and killed him.

In body camera footage taken minutes after the shots, Jaen can be heard saying “It’s a (expletive deleted) toy gun.” It was, indeed, an airsoft replica of a Colt 1911 pistol, with its orange tip still intact.

“That’s supposed to alert the public, as well as the police, to the fact that this is not a real gun,” said Daniel Ortega Jr., a lawyer for Arce’s family. Airsoft guns use springs or compressed air to fire nonlethal plastic projectiles.

CRONKITENEWS · The realism of imitation firearms: Who benefits and who suffers?

The family sued Tempe, later settling for $2 million. Jaen was granted accidental disability retirement in January. He did not face charges from the Maricopa County Attorney’s Office.

Since 2015, at least 4% of deadly police shootings nationwide have had victims holding “toy weapons,” including children’s toy guns, nonfunctional replicas, BB guns, and airsoft guns like Arce’s, according to the Washington Post’s Fatal Force database, which catalogs such shootings. The most recent shooting of a victim with a “toy weapon” in Arizona occurred in Phoenix on Nov. 30, when an “unidentified person” with a BB gun was shot. There have been at least three since then, according to the database, the most recent on Jan. 9 in Pembroke, North Carolina.

Arce’s death was one of 214 fatal police shootings nationwide since 2015 – 12 of them in Arizona – in which the victim carried a “toy weapon.”

Arce’s shooting recently has received renewed attention in Tempe city hall. Police reform has “accelerated during 2020,” prompting the city to “embrace the notion that change is positive” in the field of public safety, as City Manager Andrew Ching told the city’s newly founded Public Safety Advisory Task Force on Oct. 14.

The task force’s goal is to formulate a strategic plan to improve local policing in 2021, and the group concentrated on Arce’s case at its Nov. 10 and Dec. 2 meetings.

“(Tempe’s) actually taking this moment, and this opportunity,” said Michael Soto, task force member and executive director of Equality Arizona, “to ask these hard questions of what’s actually happening in this police department.”

Soto asked one key question on Nov. 10: Are police officers trained to distinguish airsoft guns from real ones?

His question went unanswered during that meeting, but Greg Bacon, media relations detective for the Tempe Police Department, said in an email interview that officers are not trained to differentiate fake guns from real ones. They are trained to de-escalate situations involving any apparent firearm.

Police must treat all guns they encounter as imminent threats, according to David Carter, a criminal justice professor at Michigan State University whose research on imitation guns dates back to a 1990 Bureau of Justice Statistics report.

The report was commissioned as part of a 1988 federal law mandating orange tips on imitation guns, prompted in part by a hostage situation in which a man threatened a Los Angeles reporter with a realistic-looking airsoft gun during a newscast.

Carter said his 30-year-old survey of American police departments remains persuasive today, in part due to a lack of funding for additional research since 1990. Beginning with the Dickey Amendment to the federal omnibus spending bill in 1996, the federal Centers for Disease Control and Prevention was prohibited from funding research related to gun control, according to a 2019 dissertation on imitation firearms by Kristine Gregory, a police detective in Colorado. CDC research into “firearm violence prevention” resumed on Sept. 30.

Imitation guns are designed to look like real firearms, which potentially endangers those who take airsoft guns out in public, experts say. Similarly, real guns can be manufactured in bright colors typically associated with toys.

Because any gun presents potential risk, Carter said, the circumstances officers encounter and the behavior of the person holding the gun matter more than the gun’s physical appearance.

In Arce’s case, said Ortega, the family’s lawyer, what Jaen saw – a boy about 100 feet away, quick to flee – should have dissuaded him from shooting Arce “whether it was an airsoft gun or not.”

Carter said education about the risks of playing with guns, genuine or fake, would limit killings of people holding airsoft guns.

“But realistically, I think it falls on the police,” he said, adding that use-of-force training could help. In its Nov. 10 workshop, the Tempe task force called Jaen’s minimal de-escalation training a “notable failure” by police in the Arce shooting.

Beyond police reform, a review of recent legislation reveals a push in California, New Jersey, New York and other states to address imitation firearms by mandating unusual colorations for fake guns.

Efforts to regulate imitation firearms could affect all these practices, airsoft fans say.

Arizona has neither proposed nor enacted any such laws. Geraldine Hills, founder of Arizonans for Gun Safety, said “the last time we passed any substantial gun regulation policy in the state was 2000” because of Arizona’s gun-carrying culture.

As such, Sen. Alston said, “the imitation gun issue just has not risen to the point that it’s been a major issue for us.”

About airsoft guns’ realistic design, she added, “Well, that I don’t get at all. I have no idea who would benefit from it.”

Hoxton November and other MilSim participants say they appreciate the realism.

November, based in southwestern Arizona, is an administrator of the Airsoft Arizona Facebook group, a forum for 3,500 fans who attend events across the state. Many gather weekly, role-playing as military groups.

“It’s no different than any other hobby out there,” said November, an Army veteran whose name is an alias he uses in Arizona’s MilSim community to avoid creating issues with his government job.

November entered MilSim in 2008 in North Carolina when he befriended a man selling airsoft guns from a mall kiosk. Soon after, he was hooked.

On the airsoft playing field, realism is essential, said Bryan Bijonowski, owner of VIP Airsoft Arena in Phoenix and Gilbert.

“No one’s going to want something that looks like a toy,” he said.

One obstacle to realism is federal law. Vendors must sell airsoft guns with orange tips on their barrels to distinguish them from real guns. Many players discard these tips after purchasing their weapons, November said, and MilSim participants sometimes tease those who don’t.

Imitation gun realism also benefits manufacturers. A gun company can use airsoft to “expose (its) brand to a much wider consumer base,” said Tim Seargeant, marketing manager for Kriss USA, a California arms company that makes the airsoft line Krytac.

Krytac’s airsoft guns imitate real firearms made by Kriss, as well as War Sport and Barrett under licensing agreements. Seargeant said customers have to be 18 to purchase airsoft guns, but many users are in their early teens.

“Hopefully when they grow up, they become gun owners,” he said. “They’ll remember that hey, they had the Kriss Vector airsoft gun when they were a kid.”

Airsoft guns aim to replicate firearms, he said, and so do not contain additional safety features.

“These are tremendous tools of safety,” Heller said. “This is how you safely teach a child how to shoot a gun.”

“It can be a useful tool to use airsoft for training purposes … when the proper restrictions and safety measures are taken,” said Gregory, the Grand Junction, Colo, detective who wrote the 2019 dissertation.

This utility depends on realism, she said.

“In a military-type setting, I don’t think a neon green airsoft gun is going to do the trick,” Gregory said.

Efforts to promote public safety by restricting imitation firearms have focused on constraints based on appearance. The desire to alter physical characteristics has prompted such bills as California’s SB199, which passed in 2014 and required imitation firearms to be brightly colored, translucent or have spots of “fluorescent coloration.” California is one of a handful of states and municipalities to implement such restrictions.

However, Carter concluded in his report that appearance-based restrictions are ineffective.

“This is counterintuitive, but the appearance and the shape of the toy gun (were) irrelevant,” Carter said. “The red plastic markings intuitively seemed like they ought to be something … they virtually made no difference.”

Sgt. Tommy Thompson of the Phoenix Police Department confirmed in an email interview that real guns “altered to appear as toy guns” are “used in the commission of crimes.”

This point presents a weakness of appearance-based restrictions: real guns can be bright colors, too.

“The lines between real guns and toy guns are blurring all the time,” said Hills, of Arizonans for Gun Safety.

“I’ve seen real firearms today that people made for fun,” he said, “where they would make it look like a Lego gun, or they’ll make it Hello Kitty pink.”

Alston said she has encountered such a firearm in government.

“One of our Arizona legislators a few years ago had a pink handgun, so maybe color doesn’t matter either,” she said.

State legislation currently is a dead end for public safety reform in general, said Soto, of the Tempe task force. Instead, change could come at the local level.

“This is a great sport, and it’s a sport that I don’t want to get banned … because people are not responsible,” he said. “But honestly, it’s not their fault, because they’re mistaught on how to handle these (types) of weapons.”

“It really does hurt me when I hear (about) people getting shot in the news, over an airsoft gun,” he said.

“And at the end of the day, the answer is absolutely not.”

Claytoonz: This Is The Way