Pima County is getting a state-run vaccination site at the University of Arizona that will begin appointments on Feb. 18.

The new site will follow the state’s current vaccine eligibility, which includes those 65 and older, educators, childcare workers and protective service workers, according to Arizona Department of Health Services Director Dr. Cara Christ.

As the state-run POD, or point of distribution, registrations will go through ADHS’s website.

The university says it’s delivered more than 12,000 COVID-19 vaccines at a rate of 1,000 shots per day to the educators it currently serves. According to the governor’s office, the site could reach 6,000 people a day when operated at full capacity.

The site has a drive-through location on the University of Arizona Mall and a walk-up site at the Ina E. Gittings Building.

The university will expand its current hours of operation as a POD that currently serves educators and childcare workers. It will transition to a state site and eventually operate 24/7 as Arizona receives more vaccine doses.

UA President Robert Robbins said the site will eventually move from its current six hours a day of operation to two eight-hour shifts.

According to Christ, the university will start with a “soft launch” with expanded hours at first and will become a fully operational state-run POD by Feb. 22.

However, Christ said the vaccines supplying the state-run site will be taken out of the county’s already limited allocation. This week, Pima County’s vaccine allocation was decreased by 39%.

The state submitted a federal resource request for 300,000 doses followed by an additional 300,000 vaccines a week in January, but the request was denied. Christ said the state was asked over the weekend to re-submit the request and is awaiting an answer.

“We continue to monitor our weekly allocations and we give that out on a pro-rata basis of the population of the phase that each county has. We believe that we are going to stay relatively consistent over the next couple of weeks with the amount of vaccine that we get,” Christ said. “But we always think that it's better to have the resources established. So make sure that they've got staffing, funding, that management systems are put into place so that when we do get an increase in vaccine, those sites are ready to go to full capacity.”

Robbins said the university has asked the state for an incremental increase in vaccine supply, and he anticipates up to a 25% increase in the county’s allocation as production from Moderna and Pfizer ramps up.

“We don't have a demand or throughput problem, we've got a supply problem. We're targeting between 6,000 to 8,000 doses a day. If we ran it seven days a week, we're talking 50,000 doses a week, just at our POD,” Robbins said. “So the state has got to dramatically increase if we're going to build this out and take advantage of running a 24/7 operation. They've got to be able to supply us the vaccine.” 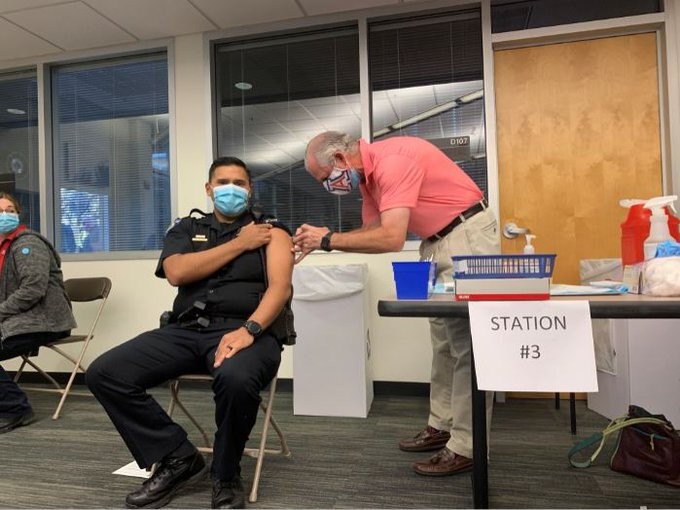 But taking vaccine doses away from the county to support the POD may hinder efforts at other county-run vaccination sites.

“We need more capacity to distribute vaccines, but we need more vaccines. For them to take out of the allocation for Pima County potentially means that some of our other PODs would have shorter hours, less accessibility, might have to temporarily close until we get more vaccines,” said Pima County Supervisor Adelita Grijalva. “While we appreciate the state opening up a state POD, we actually need more vaccines. That is the biggest problem that we have.”

The existing state-run locations in Maricopa county—one at the State Farm Stadium in Glendale that opened on Jan. 11 and a second at the Phoenix Municipal Stadium that opened Feb. 1—have distributed 204,061 vaccine doses as of Wednesday.

Data released by ADHS shows 62% percent of vaccines were given to white residents, while 4% were given to Hispanic or Latino residents. Maricopa County’s population is 31% Hispanic, while Pima County’s is 38% Hispanic, according to the latest census data. However, 29% of vaccine recipients’ ethnicities were marked as “unknown” at the state-run PODs.

While Pima County has distributed vaccines to community health centers and held pop-up vaccination events to reach less privileged populations, these groups could become more isolated if the UA POD follows the same trends as the ones in Maricopa.

“A disproportionate number of people of color are being underserved, and that is a big concern. My concern is that the state POD will exacerbate the problem that we have here in Pima County,” said Grijalva, whose District 5 includes heavily Hispanic neighborhoods. “We want to make sure that as many of our vulnerable populations have access to the vaccine, and the data from the state PODs is not as promising as I would have hoped in regards to distribution to people of color and other vulnerable populations.”

“I would hope that because the UA campus is more centrally located to the urban core than the sites in Glendale and Tempe, that we would not have those same issues,” Scott said. “I think when you look at the populations who live in and around Glendale and Tempe, I can see why they have those disparities. I don't think we are as likely to have those disparities because of the location of the UA campus so close to our urban core.”

However, access to the UA POD could become limited to those with computer literacy problems or transportation issues.

“While the county’s large vaccination centers have been very efficient at delivering vaccines to people who have the resources and wherewithal to sign up for them, we need to make sure we’re being equitable and vaccinating people with transportation difficulties or who are homebound, or who don’t have the technology needed to get appointments,” County Administrator Chuck Huckelberry said in a press release from the county. “We don’t want them to get left behind. I caution everyone that without increased vaccine to operate this expanded POD and to maintain current County vaccinations efforts, vaccinating vulnerable and disadvantaged populations will be more difficult.”

“I'm glad for two things that we're doing as a county. Number one, having the call center, which is obviously not to set up appointments, but to help people who are having trouble setting up appointments online,” he said. “I'm also glad that we are looking into expanding our use of mobile vaccination centers. That, I think, is going to be particularly helpful to do residents in rural areas of the county where internet access might be a concern.”

Increasing the pace of vaccinations while ensuring second doses

The county is ahead of its accelerated vaccination plan, which called for 300,000 people to receive vaccines by the end of March. According to Dr. Theresa Cullen, the county health department director, the addition of the university POD could get the county to this goal by the beginning of March instead.

The county-run vaccination centers only serve the 70+ population. The health department has stratified the rollout of vaccines to age groups based on those most at risk of severe complications when contracting COVID-19.

Now, the county has announced the 65+ age group could be eligible to receive vaccines at county-run sites early next week “if the vaccine supply is available,” according to a press release.

Pima County has administered 166,382 vaccines as of Wednesday, but 133,980 individuals still need a second shot to be considered fully immunized.

“We have been very successful with our vaccine delivery in Pima County and we have about 130,000 people who will need their second dose of vaccine over the next four weeks, and that’s on top of the need to continue to deliver thousands of first doses a day so we continue to make progress stopping the spread of the virus,” Huckelberry said. 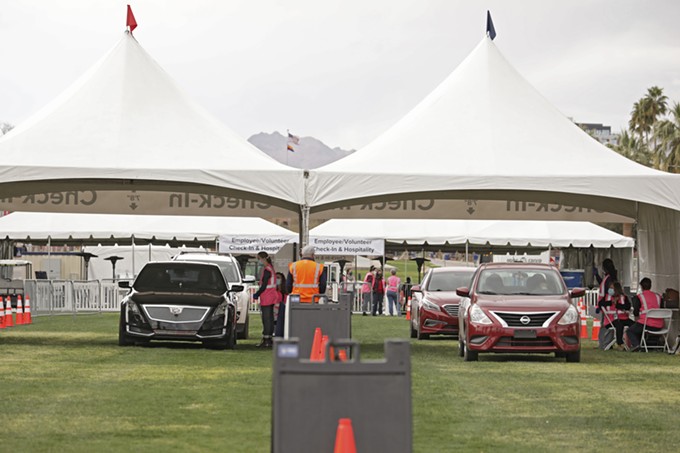 While the state isn’t allocating Pima County a higher vaccine supply than its population of eligible recipients calls for, Christ said the state will work to provide second doses for those in need of them.

“Every week, what we make sure is that we match the allocation to the best that we can for second doses from either three or four weeks ago, depending on what vaccine that they are doing,” Christ said. “Right now, unfortunately, there is no extra vaccine to be able to allocate, because if we were going to give more to Pima County, that takes some from a different county. So what we'll be doing is we will be working with the health department on the allocation to providers on that to see how we can support the additional hours that the UA is going to add and see what we can do.”