Workers rally in Phoenix, U.S. for $15 minimum wage, end of reliance on tipping 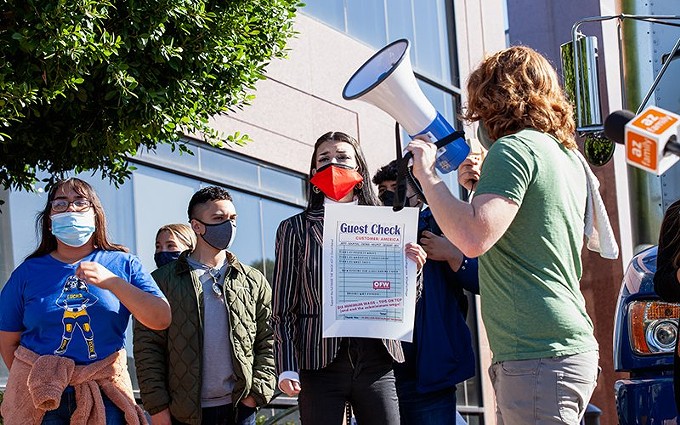 Alberto Mariani/Cronkite News
Activists wait outside Sen. Kyrsten Sinema’s office in east Phoenix on Monday to speak at a nationwide virtual rally in favor of raising the minimum wage to $15 per hour. Rallies also were held in New York, San Francisco, Chicago and Denver.

Correction: The original headline on this story was incorrect. Organizers still want to allow customers to tip service workers, in addition to an increase in the minimum wage to $15 an hour.

PHOENIX – Blanca Collazo started working as soon as she could.

She was approved for Deferred Action for Childhood Arrivals, or DACA, at 16. She then was hired as a hostess at the Old Spaghetti Factory restaurant to help her family with bills and to save for college tuition.

She worked long shifts after school for $10 an hour. She saved enough to attend college after she graduated, but the pandemic forced Collazo, 19, to step back from school so she could earn enough to survive.

On Monday, Collazo and a handful of fellow organizers in Phoenix joined like-minded activists around the country who rallied to raise the minimum wage and lower the reliance on tips. More than 1.6 million workers, mainly in the restaurant industry, are paid a minimum wage in the U.S. as low as $7.25 on the federal level and, more recently in Arizona, $12.15 an hour.

Collazo told her story in support of the Raise the Wage Act – a provision that would eventually raise the federally required minimum wage to $15 an hour – included in President Joe Biden’s $1.9 trillion COVID-19 relief package.

Collazo now works as an organizer for LUCHA (Living United for Change in Arizona), a nonprofit organization dedicated to working families.

“I’m fighting for future generations because I don’t want them to go through what I went through,” she said. “Being out here today, we’re not asking, we’re demanding.”

Fight to raise the minimum wage

One Fair Wage, a national nonprofit organization representing tipped workers who make less than the minimum wage, LUCHA, Arizona Jews for Justice and the Poor People’s Campaign organized the Phoenix event in support of workers across the city.

Jacob Cordas, an organizer for One Fair Wage, led a chant of 16 activists gathered outside Sen. Kyrsten Sinema’s office in the Biltmore area of east Phoenix.

Millions of workers have lost their jobs in the U.S. because of COVID-19 – 1 in 4 worked in a restaurant, according to the U.S. Bureau of Labor Statistics. A survey by One Fair Wage shows 60% were unable to access unemployment benefits because their reliance on tips meant they did not qualify.

The Phoenix organizers urged Sinema, a Democrat who co-sponsored a minimum wage fairness measure as a member of Congress in 2013, to publicly support Biden’s wage measure in the COVID-19 relief bill. Sinema’s office had not responded by Monday evening for comment.

Arizona is ahead of the federal minimum wage, with a voter-approved plan several years ago that led to this year’s statewide minimum wage to $12.15 an hour. Flagstaff’s minimum wage reached $15 an hour this year.

A living wage calculator by the Massachusetts Institute for Technology estimates the livable wage for one adult with no children to be $12.29 in Maricopa County. A worker with one child needs up to $25, according to the calculator.

Advocates want to achieve a livable wage for individual workers as well as for working families, arguing that even $15 wouldn’t be sufficient for many households.

But the minimum wage has its critics, among them small-business owners who say a higher minimum wage could drive them out of business. A controversial measure in the state Legislature to restrict Arizona’s minimum wage for young, part-time workers failed in 2019.

Scraping by on tips

In addition to raising the federal minimum wage in stages to $15 over six years, the Biden proposal would demolish a historic system of having workers rely on customers’ tips to supplement a salary. Critics say it forces waitstaff and other workers to rely on customers’ goodwill, and that women and people of color, especially, suffer harassment and low tips.

The federal minimum tipped wage is $2.13, the amount that employers can use to decide workers’ base salary. Organizers want to end what they call the subminimum wage completely, pushing for a $15 minimum plus tips.

Haley Holland, an organizer at One Fair Wage, said she has worked at a number of jobs in the service industry – as a restaurant hostess, waiting on customers and bussing tables. She said harassment has risen and shifted because of the COVID-19 pandemic.

An example, she said, is “maskual harassment,” when mostly male customers ask servers to remove their mask to assess their looks.

“It is one more thing that service industry workers have to deal with that is unacceptable,” Holland said.

It’s the newest twist in tipping, a discriminatory practice that arose in post-Civil War America as a way to avoid paying Black workers a livable wage, according to “Forked: A New Standard for American Dining,” by 2015 James Beard Leadership Award winner Saru Jayaraman.

“One Fair Wage isn’t just about money. It is about giving service workers the respect they deserve,” Holland said.

Battling to win the war on wages

Community organizers put wage initiatives at the forefront of income equality as the pandemic continues to threaten service workers financially and physically.

The Raise the Wage event in Arizona is a part of a larger national event, with protests taking place Monday in nine other cities, including Washington, D.C, New York, San Francisco, Chicago and Denver.

“It’s really important for people to know that they have to get involved,” Collazo said. “We are constantly getting left out of the conversation, and we could easily be a part of those conversations and create real change.”

The pressure now is on Congress to pass the stimulus before current unemployment benefits expire on March 14.

Recreational marijuana sales race ahead, but industry equity falls behind