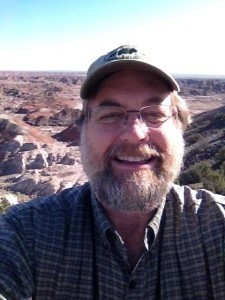 Kevin Dahl is seeking the Ward 3 seat on the Tucson City Council.
With Ward 3 Councilman Paul Durham resigning as of March 1 and not seeking reelection, two candidates are emerging to run for the north-central seat later this year—if there is an election this year. (More on that uncertainty later.)

Kevin Dahl, the senior program manager for the National Parks Conservation Association, filed paperwork today to run for the seat.

“Paul has been an excellent Council representative for the residents of Ward 3,” Dahl said. “I supported him when he sought the seat, and now I am supporting him in the difficult decision that he has made to step down.”

Dahl, who has also headed up the Tucson Audubon Society and Native Seeds/SEARCH, has already lined up endorsement from Congressman Raul Grijalva and local environmental queenpin Carolyn Campbell, who is chairing Dahl's campaign.

He said he’d also be interested in appointment to the seat, but he understands that council members may be looking for someone who isn’t going to run for the seat and if that’s the case, he’s more interested in campaigning for a full term.

Meanwhile, Juan Padres, who ran against Pima County Supervisor Sharon Bronson in the 2020 primary, announced on Facebook last week that he’s launching a campaign the job.

“I fully understand the problems and challenges that Ward 3 faces, and look forward to working tirelessly to address them,” Padres said. “My campaign platform will be very similar to the one I ran on last time, making poverty the number one issue that needs to be addressed in our community, especially in the wake of this devastating pandemic.”

A primary election for the Ward 3 seat—along with Ward 6 and Ward 5—is set for Aug. 3, with the general election to follow on Nov. 2.

But we’re still waiting to see if that election is going to happen. State lawmakers are still trying to force the city of Tucson to move its election on onto the same even-year cycle that most elections in Arizona take place. If that happens, city elections would take place the same years as presidential and midterm elections.

Attorneys for the city and the state recently argued before the Arizona Supreme Court whether the state could force the city to move its election. That decision is expected soon, according to City Attorney Mike Rankin.

If the election is postponed until 2022, then whoever gets appointed to the Ward 3 seat would serve an extra year, as would Ward 5’s Richard Fimbres and Ward 6’s Steve Kozachik.

If the election happens this year, it remains to be seen whether Republicans can stir up candidates to run for any of the council seats. Candidates for council seats must file their nominating petitions by April 5, so the clock is ticking. So far, we haven’t heard any rumors of GOP candidates and new Pima County Republican Party chair Shelley Kais has not yet responded to our email asking if she was aware of anyone planning a campaign this year.

Speaking of Ward 3: Last week, we reported that Mayor Regina Romero was pushing to appoint Karin Uhlich, the former Ward 3 council member, to finish Durham’s term after he steps down on March 1.

But not every council member is on board with the plan to hand the office to Uhlich. Kozachik says he’s heard from other people who may be interested in the gig and thinks the city should follow its previous practice of accepting applications for the job.

Former Ward 3 Councilman Michael Crawford, an attorney who held the Ward 3 seat for a couple of years in the 1990s, told the Weekly he would be interested in the job, assuming the council opens the door to applications as it has in the past. Crawford said he wouldn’t seek to run for the job later this year.

Community activist Bonnie Poulos, who has been active with the Campus Farm Neighborhood Association as well as serving on a variety of city boards such as the Charter Review Committee and Tucson Planning Commission, is also interested in being appointed to serve out Durham’s term, but said she would not run for the seat.

“The move to appoint past Ward 3 council member Karin Uhlich is understandable, but I think it would be refreshing to have new ideas from someone who does not have future political aspirations,” Poulos said. “And someone who has spent time and energy learning why we make the decisions that we do and being a part of the citizen voice in those decisions.”

15% of Pima County Residents have Received a COVID-19 Vaccine