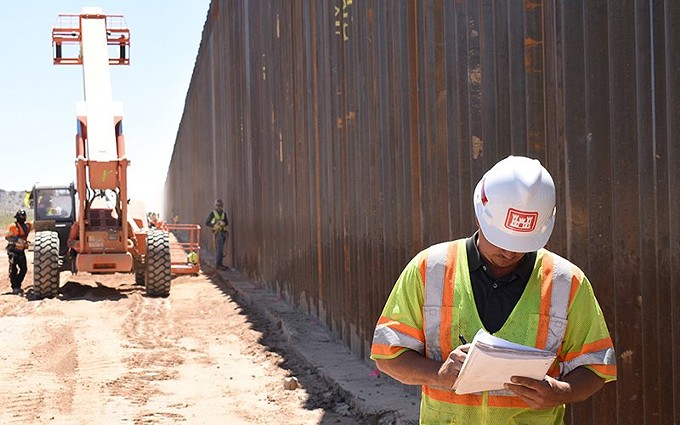 WASHINGTON – The Supreme Court postponed upcoming hearings on two Trump administration immigration policies after both had been reversed on the first day of President Joe Biden’s term.

The court was scheduled to hear arguments in the coming weeks challenging then-President Donald Trump’s ability to divert Defense Department funds to border wall construction and on the administration’s Migration Protection Protocol. The so-called “remain in Mexico” policy required asylum seekers to wait in Mexico while their cases were processed in the U.S.

That would have left government lawyers in the position of defending policies the president opposed, leading Acting U.S. Solicitor General Elizabeth Prelogar to ask the court Monday to take the cases off the calendar for now as moot. The court did so without comment.

In a tweet, the American Civil Liberties Union said it was a “good sign that the Biden administration doesn’t want to see us in court to defend these illegal policies.” It went on to call on the president to “rescind the forced return to Mexico policy, give those subjected to it a fair and safe asylum process, and tear down the wall.”

The remain-in-Mexico policy was enacted in January 2019, reversing previous Obama administration guidance that let migrants enter the country and begin living in the U.S. while they were seeking asylum.

Under the new policy, immigrants had to find housing in shelters, refugee camps and apartments on the southern side of the border, putting some at risk of the very threats they had sought to escape by coming to the United States, critics of the program said.

The advocacy group Human Rights First found 1,314 publicly reported cases of violent crimes as of Dec. 15, 2020. Of those, 318 involved children who were kidnapped or nearly kidnapped.

U.S. Customs and Border Protection data shows that in just the last three months of 2020, more than 5,000 people were turned back at the border, 194 of them at crossings in Tucson and Yuma.

David Bier, immigration policy analyst at the Cato Institute, said that asking to have the cases pulled from the docket was a good move by the Biden administration, allowing it to “avoid a ruling from the Supreme Court that would have forced them to take action they wouldn’t have wanted to take.”

While it may have been a good move for the administration, it remains to be seen how it will play out for migrants, said Yael Schacher, senior U.S. advocate at Refugees International. She said it is probably a better outcome than if the majority-conservative Supreme Court had ruled on the case, but it just “kicks the issue down the road.”

The administration’s policy shift means there are no additional migrants entering the program now, she said, but Biden should focus on improving living conditions of those already in the program who are stuck across the border.

“They need to provide the basic necessities, safe housing, food, healthcare and vaccines for COVID-19,” Schacher said. “Not only do we need to help people on the Mexican side, we need to help them on the U.S. side too.”

The second lawsuit, filed by the Sierra Club, argued that Trump’s use of an emergency declaration at the border to justify diverting Pentagon funds to building the border wall was illegal – not to mention expensive.

A Department of Homeland Security report said Trump redirected $3.8 billion from the Army, Navy and Air Force budgets to the border wall.

The court’s order came one day after Biden signed an executive order that he said would begin a “full review of the previous administration’s harmful and counterproductive immigration policies.” He said at the event Tuesday that he hoped to reestablish an image of the United States as a “haven for people in need.”