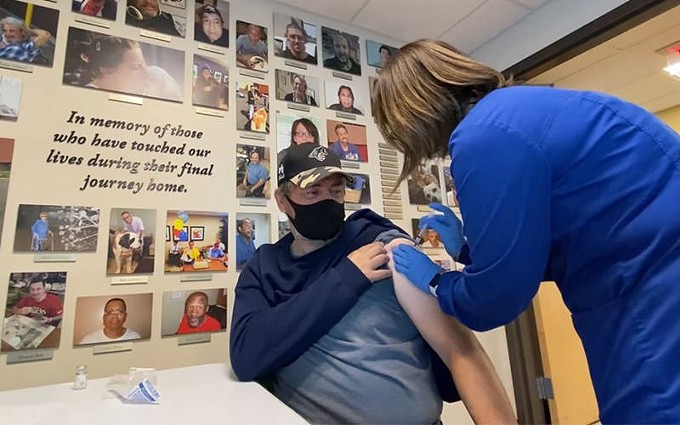 Circle the City
Medical staff at Circle the City, a nonprofit that provide health care to those experiencing homelessness in Maricopa County, gives a man his first dose of the COVID-19 vaccine on Jan. 29, 2021, in Phoenix.

LOS ANGELES — Clayton Foster was living out of his car when he contracted COVID-19. The 67-year-old knew he faced higher risks of death or severe outcomes during the pandemic because of his chronic heart and bladder conditions, but for Foster and thousands of other homeless people across the Southwest, it’s been hard to protect against the virus.

“I try to keep my stuff clean and neat, but it is very hard to do,” Foster said.

Foster survived the illness with the aid of health services provided by Phoenix-based nonprofit Circle the City and became the first patient in the organization’s care to receive the COVID-19 vaccine back on Jan. 21.

Foster is part of a small segment of the homeless population in the Southwest who have begun getting the vaccine, but organizations serving the homeless elsewhere are facing challenges in inoculating the at-risk populations they serve.

In Los Angeles, providers are eagerly awaiting news of when vaccines will be available – and they face a steep challenge.

With that many individuals to account for, it poses a major logistical question as to how to most effectively and efficiently vaccinate such a large, high-risk population.

In the past two weeks, Circle the City has received 400 doses of the Moderna vaccine to distribute among its four locations in Maricopa County, according to community liaison Marty Hames.

“It’s been going very smoothly,” Hames said. “At this point, we’ve distributed about 250 total vaccines to employees and patients.”

In accordance with the state of Arizona’s phase 1B of the rollout guidelines, the organization has begun to vaccinate some of the patients in its care after initially vaccinating its health care workers first.

The organization has increased its daily output after receiving another shipment of 200 doses in the past week.

“We’ve just been expanding the number of people that we’ve been able to provide the vaccine to, as we’ve received it,” Hames said.

Hames said the organization was very diligent in planning the logistics of a rollout, well ahead of when it received its first 200 doses of the vaccine Jan. 14.

Because doses go bad if they’re not used within a brief window of time, back-up patients are lined up to ensure no doses are wasted. For a second dose, patients must return on the date they’re given on their vaccine verification card.

In Los Angeles, homeless service providers don’t know when first doses will arrive. At the Union Rescue Mission, one of the largest homeless shelters in the United States, President Andrew J. Bales told Cronkite News the organization has not received any doses of the vaccine and has been unable to vaccinate any of its patients.

“We were supposed to be getting the vaccine for those above the age of 65, but that hasn’t come about as soon as I was hopeful for,” Bales said. “So I’m hoping it will be available within the next week or two.”

Part of the difference between Los Angeles and Phoenix is the sheer number of people who need vaccines. LA County has more than 10 million residents, more people than the entire state of Arizona. As of Friday, health officials reported LA County has had more than 1 million cases of COVID-19, compared to Arizona, which has had more than 748,000 cases across the state.

As cases of COVID-19 in the United States began to skyrocket during December, so did cases in Los Angeles’s homeless population.

“From November 30 to December 30, cases among people devastated by homelessness in our area increased by 66%,” Bales said. Los Angeles news radio station KNX1070 reports total confirmed cases in the homeless population jumped to 4,578 cases and 86 deaths in December, from 2,439 cases and 54 deaths in November.

On Monday, California Gov. Gavin Newsom made a change in the rollout of the vaccine to prioritize individuals above the age of 65 and health care workers. Under the original plan, homeless people would have been prioritized in the current tier, the Los Angeles Times reported.

Bales hopes this change will quickly bring vaccines to the organization’s older population, but knows it will still be a complicated process.

“It will not be any simple rollout,” Bales said. “There will be a tremendous need if we address everyone who’s either in a shelter or on the streets.”

For now, Bales and the rest of Union Rescue Mission is forced to play the waiting game, which will likely cause even more safety concerns in Los Angeles’s homeless community.

“I expect many more outbreaks to come, unfortunately, and that’s why we have such a need of getting the vaccine,” Bales said. “It’s been the battle of our lives in the fight to save our lives.”

UA to Deliver 800 COVID-19 Vaccines a Day This Week 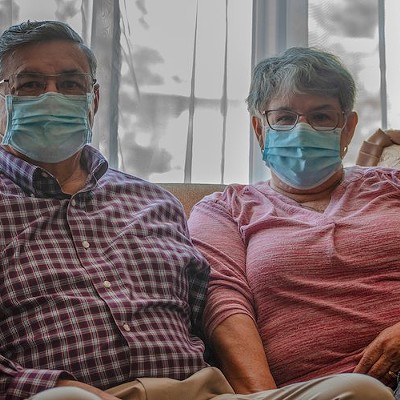