State lawmaker and weird-uncle-you-desperately-avoid-at-family-gatherings Mark Finchem has always been one of the nuttier lawmakers at the Capitol since his election to the Arizona House of Representatives in 2014, what with his bills to make gold legal tender, his links to far-right organizations like the Oath Keepers and the Coalition of Western States, and his peculiar fashion choices.

But Donald Trump’s loss in the presidential race last November has led the Oro Valley Republican to buy a first-class ticket on the crazy train. He led the day-long meeting at a hotel near the Capitol in December that featured Trump attorney Rudy Giuliani laying out numerous crazy theories that were unsuitable for actual courtrooms, including the notion that Biden’s win was illegitimate because Arizona is home to 5 million undocumented immigrants (which would mean 5 out of 7 Arizonans are undocumented, but OK).

Finchem, who was on hand for the Jan. 6 “Stop the Steal” rally in D.C., cheered on the storming of the U.S. Capitol. He tweeted a photo of the rampage with the comment: “What happens when the People feel they have been ignored, and Congress refuses to acknowledge rampant fraud.” Of course, it didn't take long for Finchem to blame Antifa for the disgraceful display of his fellow "patriots" during the D.C. rampage.

Finchem’s D.C. adventures have led to an ethics complaint at the House (which probably won’t go anywhere).

But you won’t read any more tweets from Finchem. As reported by the gang at Arizona Capitol Times, this week, in solidarity with the now-banned Trump, Finchem deleted his Twitter account after tweeting a promise to boycott Lowe’s after the Loew’s hotel chain canceled a fundraising event for Sen. Josh Hawley. “This is what Hitler and Stalin did, what next camps? Ovens?” Yes, we all know it’s a slippery slope from canceling an event reservation to the Holocaust.

Giving up his 55K or so followers, Finchem has moved over to the right-wing Twitter knock-off Gab, where his new handle is AZHoneyBadger, presumably because he considers the fierce creature a spirit totem or something. (In case you’re not familiar, a hysterical YouTube clip of a narrator goofing on honey badger footage with lines about how “honey badger doesn’t give a shit” went viral a few years back.)

On Gab, Finchem doesn’t have to give a shit about moderators slapping warnings on his tweets about how his deranged claims are disputed.

Finchem fans don’t have to worry. The state lawmaker continues to deliver tall glasses of crazy on Gab about Trump’s comeback, including a prediction that Trump will run for the House of Representatives, depose Speaker Nancy Pelosi, impeach Biden and Harris and then reclaim the White House. Could totally happen! 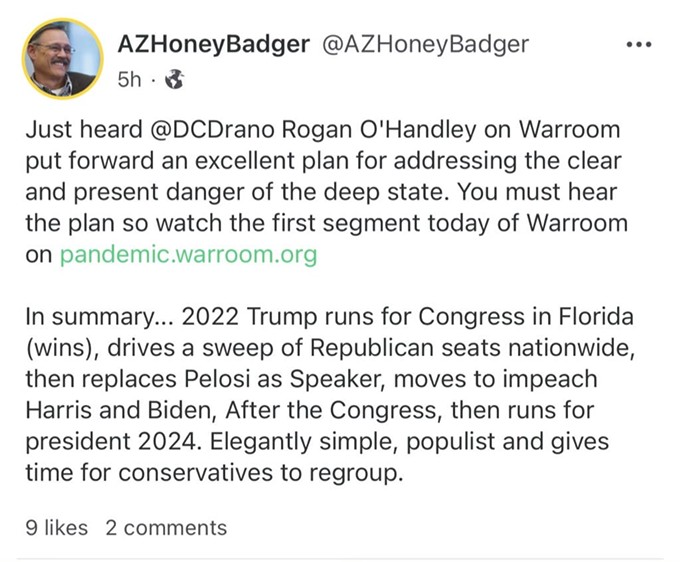 Finchem is also facing a nascent recall effort, led by Ralph Atchue, a Democrat who lost to Finchem in 2018. LD11 isn’t exactly friendly territory to Democrats, but we’ve seen some unexpected turns in Arizona politics in recent years. If Atchue can get the signatures, we could have a barn-burner of a special election.

But even if the recall fails to get off the ground or Finchem survives an election, his antics have also put him on the wrong side of Gov. Doug Ducey, who is known to hold grudges. Hope he’s not counting on any of his bills—should they make it through both chambers—getting signed this year.