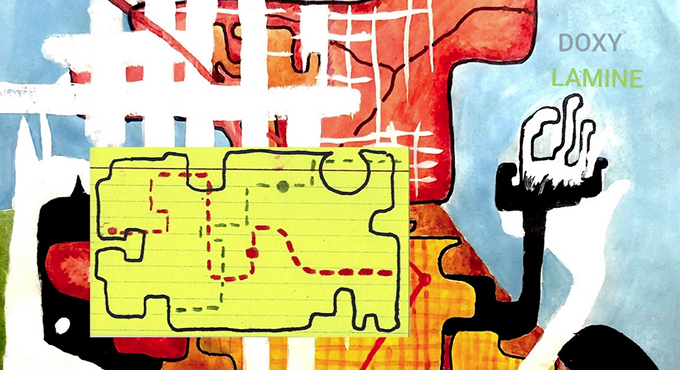 Though not explicitly about Tucson, Doxy Lamine’s new EP features many of the elements that make our town distinct. Doxy Lamine  is a side project of local rock band Infinite Beauties, led by guitarist and singer Adam Lopez. At under 25 minutes, the new EP is clean, energetic and to-the-point — and it certainly has some points to make.

Lopez was writing and rehearsing new material while recording his last album, 2020’s Precarious Time, with Jim Waters at Waterworks here in town. While the band was ready to record the new tracks right away, the pandemic kicked everything to the side.

“It was frustrating in many ways because we couldn't even rehearse, albeit it also gave me time for making demos and preparing the details for the return to the studio — I mean every detail!” Lopez said.

Ultimately, the band was able to record the well-polished tracks from July to October 2020. Though the sessions produced eight songs, only six made the cut. “The original idea was to have an eponymous CD, but we instinctively called it ‘Small, Small Town’ based on the opening tune and the artwork done by my son Sol,” Lopez said. “The song is not so much about Tucson, but more about dating in a small town.”

Themes aside, the EP itself works as a kind of small town, with each song serving a unique role and sound: the title track kicks things off in a bluesy fashion, with Lopez lamenting personal vices over a surprisingly upbeat rhythm and some wonderful violin lines by Mariah McCammond. "You Did It," has more of an alternative rock flair with call-and-response singing between Lopez and Marta DeLeon from the Weekend Lovers, gradually forming into a close harmony; "Crisis Or Opportunity" features a classic borderlands rock sound, based around a dusty guitar line and Lopez's low and smooth vocals.

Though the EP begins with standard rock affair, it grows more political and spiritual through its runtime, with some blunt and even existential lines on the second half like “Make peace with God before you’re dead … If it happened to you, maybe you’ll know how it feels.”

This all concludes with the multi-layered, progressive final track “Spirituality Song,” which begins with a spoken word recital by Joseph Graves. The jaunty closer channels some darker themes, but never loses sight of the driving central melodies. At points, the groove even sounds like another great Tucson band, The Mission Creeps, with its chilly keyboards and vast sound.

It’s a quick, easily digestible collection of tracks that reminds you to try to get your life together, and if you can’t, you might as well dance.