Several Tucson-based bars and restaurants have filed litigation against Pima County in attempts to overturn its mandatory 10 p.m. to 5 a.m. curfew they say disproportionately affects the private sector of businesses that depend on revenue from operations during these hours.

Owners of Cobra Arcade Bar, HighWire Lounge and The Maverick have joined in a lawsuit against Pima County and several county representatives they say are responsible for the curfew passed Dec. 15, including County Administrator Chuck Huckelberry and the board of supervisors who voted 3-2 to instate it.

Huckelberry proposed the curfew as the coronavirus pandemic continued to set records for both infections and deaths, which have been far surpassed since the beginning of December.

In his memo arguing for the mandatory curfew, Huckelberry said 46 Pima County inspectors observed nearly 400 establishments for compliance to the previously voluntary curfew and found 15% of them didn’t comply.

“Spread of Covid-19 is particularly common during indoor gatherings such as at bars and parties,” Huckelberry wrote in the memo. “Adherence to strategies like mask-wearing and social distancing is lower at these gatherings, and given the colder nighttime temperatures, people are more likely to gather indoors during those times.”

Under the curfew ordinance approved by the board, any nonessential businesses found violating the curfew may have their business permit suspended or revoked.

The owner of The Maverick bar, Grant Krueger, has also included other Tucson restaurants he owns in the lawsuit, including Union Public House, Reforma Modern Mexican and Proof Artisanal Pizza & Pasta.

A mandatory 10 p.m. to 5 a.m. curfew is in effect across Pima County to help slow the spread of COVID-19. It will end once the rate of transmission falls below 100 cases per 100K population. The current rate in Pima County is 357 per 100K. Details here: https://t.co/lkAwyxbFSz pic.twitter.com/MXv2wAJQkE

Why Tucson bars are fighting the curfew

Under Gov. Doug Ducey’s executive order in March, restaurants could only perform take-out services while bars had to completely close.

In May, the governor released another executive order allowing restaurants and bars to reopen with COVID-19 mitigation strategies like limiting capacity and increasing sanitation.

When cases spiked again in June, another order was issued closing businesses with series six or seven liquor licenses, which included Cobra Arcade, HighWire and The Maverick.

“We'd already gone through one shut down and lost a whole number of our key staff members. Then, after a second shut down, we lost even more key staff members,” said Krueger. “It's quite difficult to launch a restaurant all over again. It's not something you can just flick a switch and turn on and off.”

Businesses could apply to reopen in August under the Arizona Department of Health Service’s restrictions, which requires businesses to mandate masks, reduce capacity to 50% and ensure physical distancing.

“They said, ‘Hey bars, you can't operate like bars anymore.’...Essentially, any bar had to operate as a restaurant,” Krueger said.

With these restrictions in place, HighWire reopened Aug. 28, The Maverick on Sept. 7 and Cobra Arcade on Sept. 8.

However, the bars contend the mandatory curfew set in place by the county on Dec. 15 decimated their already constrained business operations during the main hours they generate revenue.

“We assume COVID doesn't know what time of day it is, and we don't know why the safety procedures that we have in place at 9 p.m. aren't sufficient any longer at 11 p.m,” Cobra Arcade owner Chuckie Duff said. “It feels like they're targeting specific businesses that make the revenue after 10 p.m. when we don't operate any differently than a restaurant that's serving brunch...It just feels like we're being unfairly punished and marginalized.”

In the same time period, the complaint says The Maverick generated 35% of its revenue after 10 p.m.

Within these three months, the lawsuit alleges HighWire received nearly 80% of its revenue after 10 p.m.

In addition to revenue loss, Krueger said one of the biggest impacts of the mandatory curfew has been the loss endured by his employees.

The lawsuit alleges Cobra Arcade has dwindled its employee base down to eight individuals. HighWire owner Nicholas Eggman said his bar has lost 20 employees, while the lawsuit’s complaint contends 11 were laid off as “a direct result of the mandatory curfew.”

While the complaint doesn’t specifically mention The Maverick’s staff loss, it says the other restaurants Krueger owns have lost 20 employees due to the curfew.

“I just want people to think about the jobs, honestly. Sometimes, when you see something like local owners sue, people think, who cares about those guys...This isn't about ownership, this is about our staff. This is the fact that the single mom that works for me as a cocktail waitress suddenly had her income cut by 75%,” Krueger said. “It's about the night cooks and dishwashers, the security guards and DJs. The guys and girls that all work to serve the service industry and what's happened to all those careers overnight. All based on a curfew that doesn't seem to be backed by science.”

Resultantly, Krueger joined with Duff and Eggman to file a lawsuit against the county to disband the 10 p.m. curfew on the grounds the county doesn’t have the legal authority to implement it.

“To us, there was no science behind a 10 p.m. curfew. If what we were doing was safe at 8 p.m. and 9 p.m. to serve guests with all of these continued restrictions, why would we also be phased to do it at 10?” Krueger said. “ So we began to talk with our colleagues in the restaurant and bar business, and we thought we could work together and be stronger in some numbers.”

However, bars and restaurants are already seeing decreased profits due to the safety mitigations they must follow.

The Maverick, a live country music venue with a 1,500 square foot dance floor, now operates without the live music, dancing or crowds that typically draw in customers.

“It's kind of like owning a bowling alley and then bowling is illegal, but you can still keep the snack bar and you can still rent the red and white shoes. People aren't necessarily coming into the bowling alley for the nacho supreme,” Krueger said. “It's certainly been a tremendous challenge for the restaurant and bar industry as a whole, and I worry that this curfew could be the knockout punch for a lot of local businesses that have just been hanging on by a thread.”

While he admits ending the curfew wouldn’t solve all the bar and restaurant industry’s problems, Krueger believes it would be an important first step.

“It certainly wouldn't be the be-all, end-all, fix-all of most of these businesses, including some of my own, we’re struggling either way,” he said. “But it would certainly help out, and I think it would buy more time, a bit of a lifeline should we say, until vaccine distribution can reach the hospitality industry.”

In an email, HighWire owner Eggman said he hopes the lawsuit will “Bring awareness to the curfew in hopes it can be reevaluated with current, factual information.”

Duff hopes the lawsuit will overturn the curfew, allowing him to resume operations at Cobra Arcade until 2 a.m.

“What it comes down to is 10 p.m. is politically inexpedient. Most people get off work and go to a restaurant, have dinner, and are at home and lay in bed by 10 p.m., so you anger the fewest amount of people by setting it at a 10 p.m.,” Duff said. “But I think what our politicians fail to realize is that there are a lot of hardworking people that make their living after 10 p.m., those people are just as important as someone who has a nine to five job.” 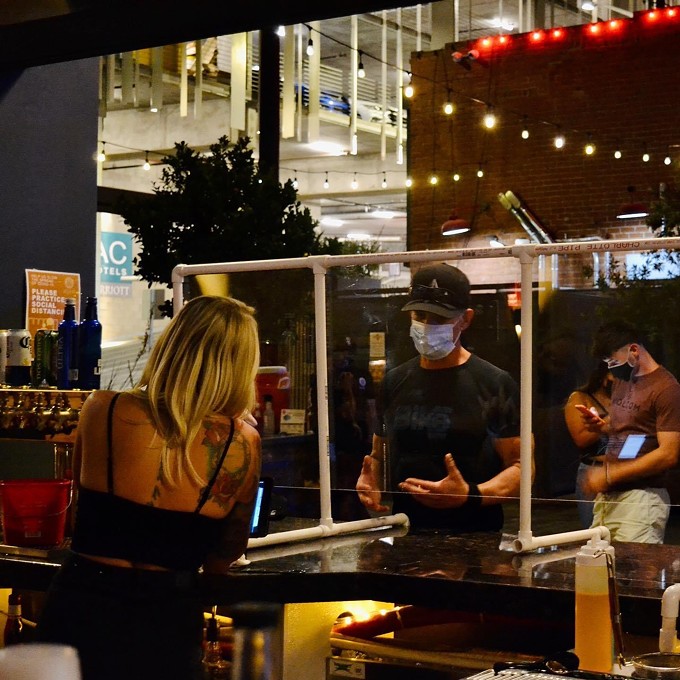 Pima County Communications Director Mark Evans wrote in an email, “As a rule, we don't comment on pending litigation.”

But when approving the curfew, County Administrator Chuck Huckelberry laid out its legal groundwork and has since provided some evidence of the curfew’s effects.

In a Dec. 31 memo, Huckelberry provided data from 3,359 case investigation interviews. Nearly 24% of respondents reported dining in a restaurant or bar, down 2% from before the curfew.

“The decreases in reported restaurant/bar dining, gatherings of 10 or more, and travel are correctly characterized as small in magnitude but trending in a healthful direction,” Huckelberry wrote in the memo. “It is notable however that this has occurred within the relatively short time period and since the most recent Public Health Advisory and Board actions related to masking and the curfew.”

Several healthcare leaders have come out in support of curfews, and even complete closures of indoor dining.

On Nov. 27, experts from the COVID-19 modeling team at the University of Arizona called for a statewide shelter-in-place order including “closures of indoor dining and bars.”

Eight leaders from the state’s hospital systems wrote a letter to Arizona Department of Health Services Director Dr. Cara Christ on Dec. 1 pleading for statewide COVID-19 mitigation policies such as a ban on indoor dining and establishing a curfew.

“There is a ton of evidence that shows that masking will help reduce spread. There's also great literature that shows that mitigation efforts which can include curfews can have a good effect on reducing the spread of the virus,” Bessel said at the press conference. “I want to thank Pima County and the mayor of Tucson for taking mitigation steps.”

In the legal arguments in his memo outlining the parameters of the curfew, Huckelberry cited sections of the Arizona Revised Statutes, including:

The lawsuit the Tucson bars have joined in on outlines five specific reasons the mandatory curfew could be unlawful:

The county has yet to respond to the lawsuit filed on Jan. 5.

In another challenge to the curfew, state Representative Bret Roberts of District 11 has asked for Attorney General Mark Brnovich’s opinion on whether the curfew is legal. In a memo, Huckelberry said he will notify the board of supervisors “if and when” and investigation is launched.

Kirkpatrick: It Is Time for Trump To Go