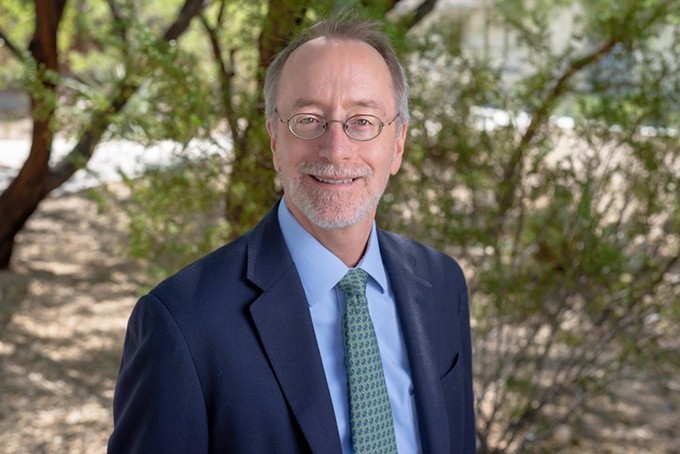 Courtesy photo
“We keep thinking it's gotten as bad as it's gonna get, and then it gets a little bit worse,” says George Hammond, the director of the Economic and Business Research Center at the University of Arizona’s Eller College of Management. "We're in a situation that seems even worse than what we thought. But that's a big source of uncertainty that we're gonna have to continue to track and have to continue to account for in forecasts.”

The future of Arizona’s economy is one of uncertainty, UA economist George Hammond made clear at a virtual economic outlook event Friday. Throughout the coronavirus pandemic, the state has fared better in unemployment numbers compared to the rest of the nation, but it has still withstood a heavy loss, according to Hammond, the director of the Economic and Business Research Center at the University of Arizona’s Eller College of Management.

Arizona lost 294,600 jobs from February to April but has replaced 66% of them, according to Hammond. Nationwide, nearly 55% of jobs lost during this time have been replaced. “That's job growth at a pretty rapid pace for the state of Arizona. On average, that translates into almost 14,000 jobs per month,” Hammond said. “If we can sustain that pace, in 2021, we will actually be back to pre-pandemic employment levels by about the middle of the year.” In order to reach pre-pandemic levels, Arizona would have to add 100,700 jobs—an average of 13,900 per month.

The total unemployment rate in Arizona has shown volatility from month to month, with the seasonally adjusted rate decreasing from 10.7% in July to 5.9% in August, then rising to 6.5% in September and 8.0% in October. However, Hammond said this may change when the state receives more precise data in 2021.

“[The unemployment rate] zig-zagged around, with big drops, and then a couple of months of pretty significant increases and then some more drops. The state rate is has looked really weird, and there's a lot of speculation about what might be driving that,” Hammond said. “Probably the best advice is don't put too much weight or spend too much time trying to explain these monthly zigzags...they'll likely be revised away once we get the revised data in March of next year.”

The biggest impact on Arizona’s economic recovery has been federal CARES Act funds. According to Hammond, the funding provided $40 billion to the state’s economy and drove a 12% increase in personal incomes, allowing Arizonans to receive more than $23 billion in stimulus payments.

“The CARES Act includes a lot of different components. But in terms of the stimulus or the financial support, by far the biggest program was the economic impact payments or so-called recovery rebates which are those $1,200 dollar checks that were mailed out to individuals, more for families,” Hammond said.

The CARES Act also provided $9 billion in unemployment benefits, and its Paycheck Protection Program for businesses created about $5 billion throughout the state, according to Hammond.

However, the provisions of the CARES Act expire at the end of the year, and unless further federal action is taken, Hammond says “we're headed for a bit of a fiscal cliff.”

In addition to the uncertainty surrounding the renewal of federal financial aid, the ever-changing status of the pandemic places a dubious component in Hammond’s financial forecast.

“We keep thinking it's gotten as bad as it's gonna get, and then it gets a little bit worse,” Hammond said. “We're in a situation that seems even worse than what we thought. But that's a big source of uncertainty that we're gonna have to continue to track and have to continue to account for in forecasts.”

Hammond’s forecast predicts Arizona’s unemployment rate will fall to 6.3% in 2021 and that jobs will return to a “pre-pandemic peak” in the second quarter of next year. 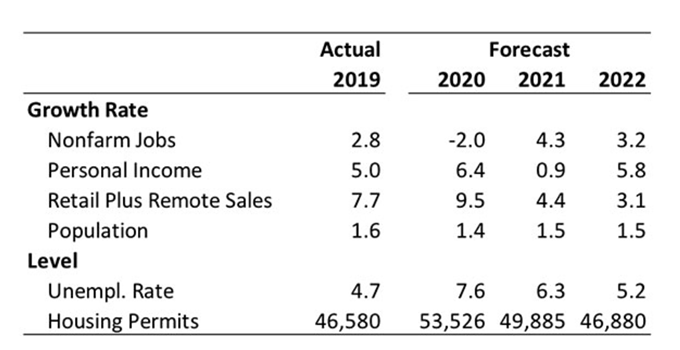 However, the forecast depends on several assumptions: there will be federal action administering $300 per week in unemployment insurance supplements and $270 billion in stimulus checks disbursed in the fourth quarter of 2020.

In his November 2020 report, Hammond says, “As of this writing, it does not appear that this assumption will be met, which suggests that the baseline projections may be too optimistic.”

At the economic outlook event, Hammond said his baseline forecast also “assumes that the current surge doesn't get much worse than what we saw in July,” but the state has already surpassed those levels.

“The baseline may wind up being a bit too optimistic. Essentially, the baseline forecast calls for Arizona to get back to pre-pandemic employment levels by about the middle of 2021, and that means that solid population growth, solid income growth and overall solid retail sales growth as we go through the recovery to pre-pandemic levels,” Hammond said.

The leisure and hospitality sector has suffered the most throughout the pandemic, and as of October, the sector had 55,000 fewer jobs than it did in February, according to Hammond. 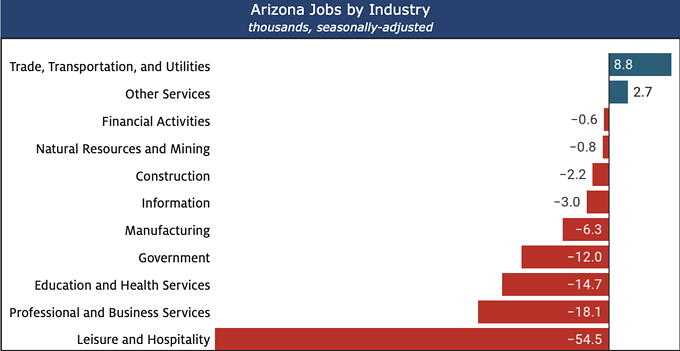 However, Hammond said he was surprised to see the education and healthcare sector decline as well.

“There's a lot of face-to-face, close interaction in those sectors. We've just seen people continue to be reluctant to do those kinds of normal checkups in either overall health checkups or diagnostic work,” he said. “Same thing for dentists, it looks like demand is significantly reduced there as well, as people are still just nervous as the pandemic continues to really spread at a rapid pace.”

“It's that big shift to online and delivery services that has really boosted those transportation and warehousing jobs,” Hammond said. “But even so, retail is back to where it was prior to the pandemic.”

Flagstaff has experienced an 18% job loss that’s “really driven by the importance of the leisure and hospitality sector up there in that part of the state,” Hammond said.

Hotel occupancy rates, travelers arriving at Arizona’s airports and customers at sit-down restaurants have dramatically declined throughout the pandemic, making the hospitality sector one of the most difficult to recover.

Hammond said consumer spending in “tangible goods” such as automobiles, appliances and building materials has increased since January.

Spending on apparel has gone down, as Hammond notes, many aren’t worried about perceptions of their attire through virtual Zoom meetings.

“But overall, it's that spending on goods that has really kind of surged. I think part of what's going on is people just don't feel comfortable going into hotels, motels, restaurants, bars…and they can't do the things they would like to do in terms of arts, entertainment, recreation,” he said. “Particularly for people with jobs, they have more money they can devote to putting a little bit more stuff in the house.”

“One of the things that we know about Arizona is that it has a relatively low cost of living. Our overall cost of living is below the national average, and that's primarily driven by the relatively affordable housing here in the state,” he said. “It stands to reason that those mobile workers may look for a little bit bigger house in a cheaper market, and certainly Arizona would come up there.”

Despite the predictions of expert economists, no one truly knows what the future of Arizona’s economy will look like amidst an unprecedented global pandemic.

“The outlook is unusually uncertain as it has been since the beginning of the pandemic. We've been emphasizing that, and what's driving that is the uncertainty about the progress of the outbreak,” Hammond said. “We've learned a lot about the virus since March, but there's still uncertainty about just how bad things are gonna get."

Claytoonz: Runs In The Family