With more than 3,800 new cases reported today, the number of Arizona’s confirmed novel coronavirus cases closed in on 341,000 as of Wednesday, Dec. 2, according to the Arizona Department of Health Services.

With 52 new deaths reported yesterday, a total of 6,739 Arizonans have died after contracting COVID-19, including 697 deaths in Pima County, according to the Dec. 2 report. 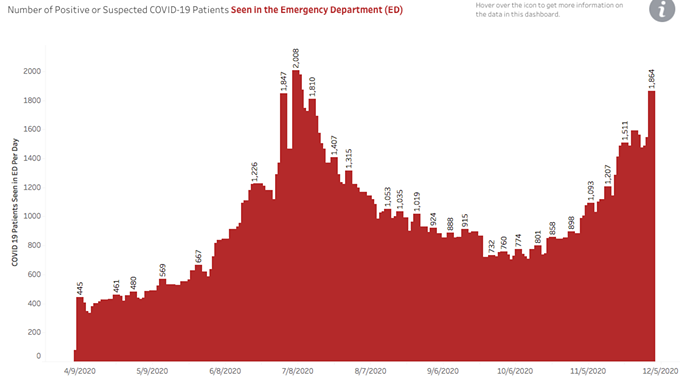 AZDHS
Pressure on ERs is growing.

Judy Rich, president and CEO of Tucson Medical Center, told the Tucson City Council last night that local hospitals are near or at capacity.

“I believe stricter measures, like the ones we used earlier this year, are the only path to avert the impending crisis,” Rich told the council. “I recognize that the City might not have the legal authority to mandate such actions, but it should be the position of the City to advocate to state leadership that it is required to prevent unnecessary loss of life and illness.”

On a week-by-week basis in Pima County, the number of positive COVID tests peaked the week ending July 4 with 2,452 cases, according to an Nov. 25 report from the Pima County Health Department. (Numbers in this report are subject to revision.)

The Tucson City council voted to enact a citywide curfew from 10 p.m. to 5 a.m. daily that will go into effect Friday, Dec. 4 until Dec. 23.

The council voted 6-0, amending Tucson Mayor Regina Romero’s initial proclamation to set an 8 p.m. to 5 a.m. curfew that would have begun tonight.

On Nov. 23, the Pima County Health Department announced a voluntary overnight curfew from 10 p.m. to 5 a.m. every day until Dec. 31—but it’s not enforceable.

As part of the amended curfew agreement among the city’s council members, if Pima County changes their voluntary curfew time, Tucson’s curfew time will follow suit.

The proposed curfew would prohibit everyone from being in public places with the following exceptions:

City Attorney Mike Rankin specified traveling to essential businesses such as grocery, home goods and hardware stores is allowed. Travel to restaurants for consumption off-premises is also allowed by means of take out, delivery, curbside and drive-thru food orders.

“The curfew does not order the closure of any business at any particular time, instead, what it does is it regulates when people can be in public places, which includes traveling on the public streets,” Rankin said at the council’s meeting. “It does not, as presented, prevent people from traveling to or from any essential activity or essential functions, even during the curfew hours.”

Offenders of the curfew will be subject to a civil infraction that holds a fine of up to $300.

Pima County offers a number of testing centers around town.