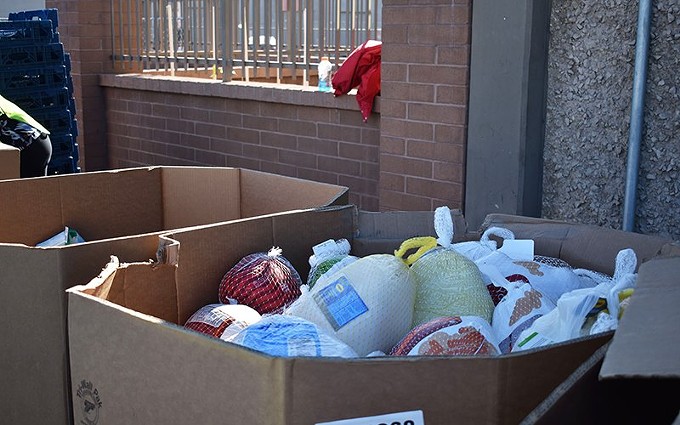 
PHOENIX – At one point Tuesday, cars came through at a rate of one every minute, six lanes across, to get boxes and bags of turkeys, potatoes and canned food from St. Mary’s Food Bank.

Members of the National Guard and volunteers in neon-orange vests, all wearing masks or bandanas, loaded up one car trunk after another to help hundreds from going hungry as the holidays approach.

“Number 6!” “Number Four!” shouted the volunteers as uniformed members of the guard and others brought the boxes to cars and trunks. People also could walk up to get goods, but drive-thru dominated the operation Tuesday.

Hunger has soared in the COVID-19 pandemic, which has cratered the economy, snatched away jobs and removed the assurance that there always will be food on the table. To alleviate the suffering, local governments and nonprofit organizations are providing federal dollars.

A spokesperson for St. Mary’s, the state’s largest food bank, said it set a record – distributing an average of 10 million pounds of food a month since the pandemic hit in March. That’s the most the organization has distributed since it opened its doors more than a half-century ago.

Phoenix has put CARES Act dollars, federal money targeted for pandemic relief, to work by contracting with the Local First Arizona Foundation, a community and economic development organization. The foundation has recruited local restaurants, farmers and other businesses to help prepare and deliver meals.

Local First Arizona launched its Feed Phoenix Initiative in July, and it has grown to include 12 farmers and 48 restaurants across the city, said Kimber Lanning, founder of Local First.

“We anticipate feeding 6,500 families this week,” she said Tuesday, adding that the group has fed more than 46,000 families so far.

Local First Arizona’s mission is not only to keep families fed, but to strengthen local businesses and the state’s economy.

“The city of Phoenix has money that they set aside that they wanted to use to feed COVID-impacted families,” Lanning said. “So we made the recommendation and proposal that they use that money to buy food from Phoenix farmers and that we allow Phoenix-based restaurants to prepare that food in order to spread the dollars out as wide as possible.”

St. Mary’s, which also will continue its tradition of feeding families on Thanksgiving, expects to serve more than 1,100 on Thursday.

The money from the state enhanced the food bank’s ability to serve, spokesperson Jerry Brown said.

“We were able to get an outside food delivery service with that extra money to be able to reach families that we haven’t been reaching since the pandemic because they’re simply afraid to come to the food bank to pick up the food,” he said.

St. Mary’s has adjusted in other ways, too. Since the start of the pandemic, it has lost about 80% of its volunteers, although some remain committed to service.

“It’s good to help out other people who are in need, so if I have the time why not go help out,” said Gary Winthorpe Frank, a volunteer.

On Navajo Nation land during one trip earlier this month, Brown said, an 8-mile-long line of cars waited for about 1,200 boxes of food, but some families went home empty-handed.

“There are 56 chapter houses on the Navajo Nation,” he said. “We were working with five or six of them when the pandemic started. We’re now working with 54 of the 56 chapters.”

St. Mary’s changed its ways to follow Centers for Disease Control and Prevention guidelines that have become common business practice – no-contact pickup allows families to drive their cars and have volunteers place the food in car trunks or the beds of pickup trucks.

St. Mary’s will be closed for food distribution on Thursday and Friday but will be distributing turkeys and other food ahead of the holidays.

– Hope O’Brien contributed to this report. 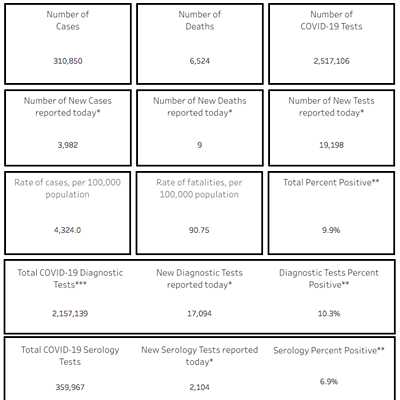