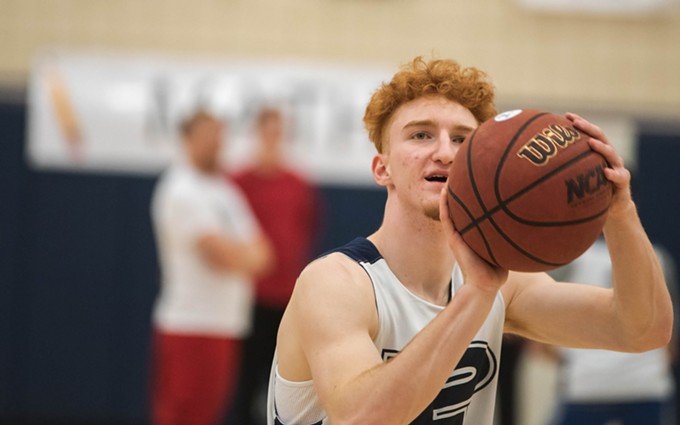 Tyler Rittenhouse/Cronkite News
Nico Mannion was a standout at Pinnacle High in Phoenix before playing one season at Arizona. He was selected in the second round of the 2020 NBA Draft.


Three Arizona Wildcats and a former Arizona high school standout were among the players who heard their name called during the 2020 NBA Draft.

The event was conducted remotely with teams making their selections from their headquarters while players got the news surrounded by friends and family in their homes.

Wildcats Josh Green, a 6-foot-6 swingman, and Zeke Nnaji, a 6-foot-11 center, were taken in the first round of the draft and point guard Saben Lee, who graduated from Tempe’s Corona del Sol High and played at Vanderbilt, went early in the second round.

And a player who might have been expected to go ahead of all of them a year ago, lasted until the 48th overall before the Golden State Warriors nabbed him.

Nico Mannion, a 6-foot-3 point guard, was considered one of the top college prospects in the country when he signed with the Wildcats after a standout career at Pinnacle High School in Phoenix. Mannion even played for Italy’s national team as a teenager.

Mannion expected to hear his name called much earlier in the evening, but he might have landed in the ideal location.

He was selected by a Warriors team coached by Steve Kerr, another legendary Wildcats point guard.

“Being the 48th pick does give me a little chip on my shoulder,” he said. “I’d say a little more than a chip. But I’m lost for words, honestly. I think next year, I don’t have any expectations going into the season. I’m just ready to get there and learn and work.”

Despite slipping to near the bottom of the second round, Mannion finds himself in what might turn out to be a perfect situation with the Warriors.

With the Warriors, he will be able to learn from Steph Curry, who is regarded as one of the league’s premier playmakers and shooters.

“When I found out (it was Golden State), that was kind of the first thing I thought of: I get to learn from Steph,” he said. “He’s been in the league for a while, a multi-time MVP. I actually got to meet him already. I played at Steph’s camp and kind of got to know him a little bit. But I’m excited, man. I think the biggest thing for me is I get someone I can really learn from. He’s a vet and one of the best players to ever play. I’m just going to be like a sponge, trying to soak up as much information from him as I can.”

His father, who was a star at Utah and who played in the NBA and professionally in Italy, said the Mannions were anticipating that Nico would go to the Warriors, who had been in contact with him. He said they “turned down” a couple of teams picking before Golden State and believes the Warriors got a steal in the second round.

“I like what (NBC Sports Bay Area analyst and former Warriors star) Chris Mullin said in his interview. ‘Nico is a top 10-15 talent’ back in December and he did not lose that talent,’” Mannion said. “That talent is still there, and when you think of it that way, he is ready to prove that he should have been drafted earlier and belongs in the league.”

The elder Mannion said Nico knows where he needs to improve in the NBA.

“He’s got to focus on two things,” he said. “He has to knock down shots, and at Arizona he took a lot of difficult shots. And I don’t think at the Warriors he will have to as much. And defensively (he has) to keep the point guard in front of him. He is capable of it and showed that at (the NBA) combine.”

Green was the first local player to come off the board when the Dallas Mavericks selected him with the 18th pick. Green is considered a potential “3 and D” player in the NBA, meaning he can shoot from long range and guard multiple positions.

Arizona coach Sean Miller had high praise for Green when he spoke to reporters about the draft.

“He is a total package and makes great decisions,” Miller said. “He’s really popular in the locker room. The other part of it is, he knows his role. I think he knows his strengths and weaknesses, and he’s very determined to work on those weaknesses and embrace those strengths early in his NBA career.”

Miller noted that Green had to overcome a lot of obstacles, from the move he made from his home nation of Australia, to overcoming injuries.

“Josh finished his high school career at IMG Academy in Florida, even though his family continued to live here in the state of Arizona, so he’s been away from home,” Miller said. “He has certainly been away from his home country. Then add to that, he had labrum surgeries, which he’s 100-percent recovered from now. But it took him away from the court at a really, really crucial time.”

Because of the adversity, Miller believes that Green is just beginning to tap his potential.

“I think we really tried to share with Dallas that Josh’s upside is even higher than maybe you realize because, in essence, he missed eight or nine months of basketball time in his senior year of high school and before his freshman year of college,” Miller said, adding that it “will be really exciting to follow” Green’s development over the next year and a half.

Green believes he’ll be a good fit in Dallas, where the roster is dotted with international stars.

“Being in a situation like this, a lot of international players, and it’s awesome to watch them play and they are super unselfish,” Green said. “They have superstars like (Kristaps) Porzingis and (Luka) Doncic which will be amazing to play with and learn from.”

But Green isn’t satisfied by just being drafted.

“Getting better every day is the goal,” Green said. “A lot of players take for granted getting drafted. I got drafted and now it is time to make my legacy and grow as a player and develop while learning all I can.”

Four picks after Green was selected, the Denver Nuggets took another Arizona star, drafting Nnaji, who was named the Pac-12 Freshman Player of the Year last season after averaging 16.1 points and 8.7 rebounds a game. He’s regarded as a good pick-and-roll player who plays hard on both ends of the court.

He said his energy and hustle is motivated by those who doubted him before he arrived in Tucson.

“I feel like people have been doubting me since my high school days,” Nnaji said. “I feel like I have a chip on my shoulder.”

Nnaji said he added 20 pounds of muscle, honed his athleticism and smoothed his 3-point shot this offseason, but also believes he is a versatile big man who can learn from, and possibly play alongside, the most versatile and unorthodox center in the NBA, Denver’s Nikola Jokic.

Miller feels that Nnaji continued to improve while Arizona was recruiting him, and continued to get better during his time with the Wildcats.

“Zeke came out of nowhere,” he said. “When we started the recruiting process of Zeke, we planned to have a player like him in this program for more than a year. That was our intention and he wasn’t even ranked in top 100 in his class. But then he started to emerge. He might have improved more than any first-round picks if you date back 24 months ago.”

Vanderbilt’s Lee, a 6-foot-2 playmaking guard from Corona del Sol, was taken by the Utah Jazz early in the second round, with the 38th overall pick, and his rights were traded to the Detroit Pistons.

Lee averaged 18.6 points, 4.2 assists and 1.5 steals per game as a junior at Vanderbilt and was named to the All-SEC second team.

“Saben Lee is an athletic score-first point guard. He’s got playmaking ability, can really finish at the rim, shoots a ton of free throws,” Bilas said following the pick. “He loves to get into your body, really uses pump fakes well.”