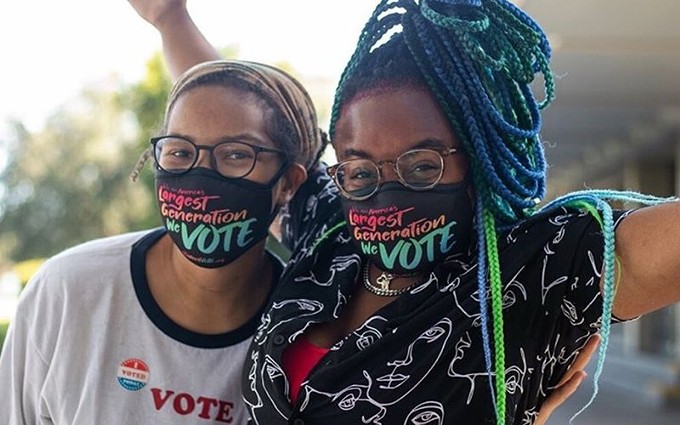 Courtesy of Angelique Herring
Alex Gordon and Aryelle Lipscomb, who are part of the Student PIRGs New Voters Project, vote safely and in style on Election Day.

LOS ANGELES – Young people stepped up on two fronts this Election Day: volunteering to replace older poll workers who feared exposure to COVID-19 and pushing more of their peers – an age group with historically low turnout – to register and vote.

Across the Southwest, such organizations as Future Leaders of America, California Campus Vote Project and Arizona PIRG Students New Voters Project worked until the last minute to help students register to vote, answer questions and inform voters about initiatives on the ballot, including Proposition 15 in California.

For 18-year-old Yesenia Ramirez Garcia of Goleta, casting her first vote was a proud moment, as she is the first in her family to vote and the first to go to college. Identity and background affect Garcia’s political advocacy, she said, because her identity is political.

“When being queer is something that is debated, when being a person of color and your protections is something debated. It definitely impacts my background, it impacts who I’m going to pick,” Garcia said.

She is one of many youth leaders who spent the past year working to boost voter turnout among people 18 to 29. Throughout the summer, she worked with Future Leaders of America, an organization that provides engagement opportunities, education experiences and personal development for Latino youth and their families in Ventura and Santa Barbara counties. She worked the phones for Proposition 15, which would have required commercial and industrial properties, except for commercial agriculture, to be taxed based on market value rather than purchase price.

Voter turnout historically is low for people 18 to 29. In the 2020 election, youth volunteers and voter advocacy groups battled until the polls closed to ensure that the youth turnout was higher than years before.

Teresa Sánchez, 22, also spent her summer and fall advocating for Proposition 15, through phone banking as a co-leader. The initiative was lagging by about 600,000 votes and looked unlikely to pass on Friday, and would have increased funding for schools by shifting the property tax structure. California will certify election results by Dec. 11.

Sánchez believes that regardless of where you come from, young people are in tune with making sure each voice is heard. When looking at the ballot, Sánchez said, there’s more to consider than just the presidential candidates – social justice, climate change, health care, and education were factors she looked at when researching local races.

“The presidential candidates are only one part of the ballot,” said Sánchez, a first-generation college graduate. “Another thing that is super important … is increasing funding for our schools since a lot of our students are doing distanced learning and many of them do not have access to laptops or technology.”

The pandemic posed another challenge to the elections, as older poll workers stepped back to avoid possible exposure to the coronavirus that causes COVID-19. To avert a poll worker shortage, the Fair Elections Center, a national nonpartisan voting rights and election reform organization, partnered with businesses to launch Power the Polls, which recruited more than 700,000 applicants to work the polls. Almost 40% of the recruits were younger than 35, and they helped ensure that enough workers were in place on Election Day, said Robert Brandon, the center’s president and co-founder.

“We’re going to have a much different generation of poll workers going forward,” Brandon said. “A younger group, a more diverse group, they’re going to look more like the voters they try to help, and a more technologically savvy group.”

California Campus Vote Project is a statewide coalition of student associations that brought enthusiasm to Election Day. The coalition, which included CALPIRG Students and the UC Students Association, worked hard to ensure the youth voter turnout until the last minute.

Students attended a daylong vote-a-thon on Zoom with the Secretary of State’s Office, where they were able to share their experiences throughout the day with peer outreach and nonpartisan voter assistance to help voters on campuses. Prominent speakers also took part throughout the day, including California state senators Hannah-Beth Jackson and Nancy Skinner.

Arizona PIRG Students New Voters Project held a similar virtual event on Zoom called Party at the Polls, where student volunteers and organizers connected with thousands of their peers to make their plans to vote. The group has educated more than 10,000 students, according to a news release.

Even with the challenges the pandemic has brought, more than 750 student interns and volunteers from 13 college campuses worked with CALPIRG Students to turn out the youth vote this semester, according to a news release.

This year, CALPIRG Students helped 10,000 students register to vote, and have had 500 volunteers educate more than 150,000 students on voting and made over 90,000 peer to peer Get Out the Vote contacts. The peer to peer contacts include conversations over the phone and text messages along with students texting their friends to ask them to pledge to vote.

“Our generation has the power to craft the futures we want. We will fight to make the voices in our community heard and advocate for students to build a better future,” said Tiara Nourishad, a University of California, San Diego tennis player who took part in the vote-a-thon. 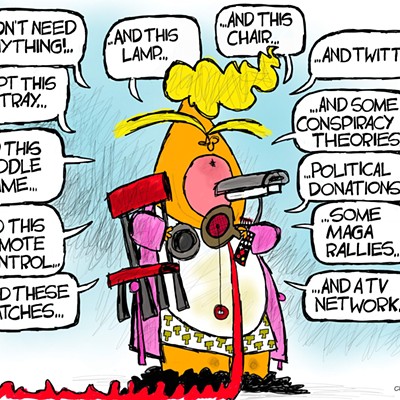