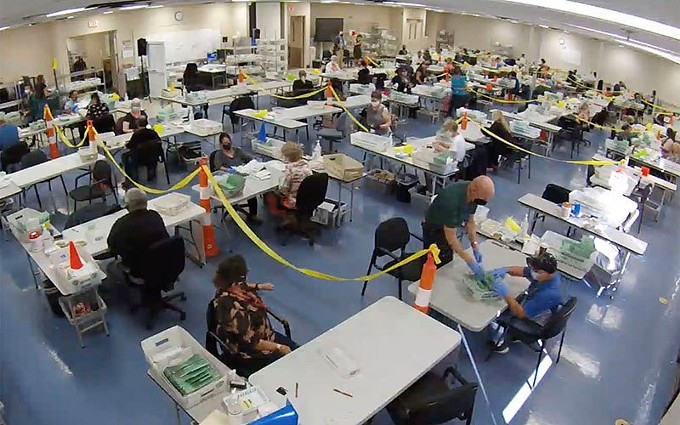 Maricopa County Recorders Office
Election workers process ballots over the weekend in Maricopa County where webcams, like the one that captured this image, stream events live. President Donald Trump, trailing in Arizona, sued over the handling of several hundred ballots in Maricopa County, but his case got a chilly reception Thursday in Superior Court.


WASHINGTON – Trump campaign lawyers dropped claims of voter fraud Thursday, telling a Maricopa County Superior Court judge instead that they were in court to point out “good faith errors” by election officials that could have affected the vote count.

That is contrary to what Trump supporters have been saying during several days of protests in which they gathered outside the State Capitol and the Maricopa County Tabulation and Election Center around the rallying cry “Stop the Steal.”

The hearing comes as the latest returns from state elections officials show President Donald Trump trailing President-elect Joe Biden by 11,034 votes in Arizona with just 16,040 still to be counted – 6,715 in Maricopa County.

That gap was noted by lawyers for state and county officials, who said the Trump campaign was arguing over fewer than 200 ballots out of more than 3.4 million cast. They accused the campaign of simply trying to “undermine the integrity and credibility of the election.”

Those comments echoed Arizona Attorney General Mark Brnovich, a Republican, who said in a national TV interview Wednesday that there is no evidence of voting irregularities in Maricopa County returns.

“We are literally talking about less than 200 votes that are in question,” Brnovich told Fox Business. “The reality is, even if it was possible that those votes flipped, I do not think it will make a difference in Arizona.”

Brnovich also refuted reports on social media that Sharpie markers used in Maricopa County polling places led to ballots being rejected because their ink could bleed through ballots and make it appear that a voter voted for too many candidates, an “overvote.”

“We were able to determine that did not affect anyone’s vote,” Brnovich said of what came to be known as Sharpie-gate. “They also did a random audit of 2% of the precincts, and it came back 100% that there wasn’t any statistical anomalies or errors.”

The lawsuit was filed Saturday by the Trump campaign, the Republican National Committee and the Arizona Republican Party against Arizona Secretary of State Katie Hobbs, Maricopa County Recorder Adrian Fontes and the members of the Maricopa County Board of Supervisors.

The hearing got off to a rocky start when Kiley and the government’s attorneys sharply questioned the process the Trump campaign used to find witnesses for their case – essentially posting a form online for anyone to fill out if they thought they were a victim of voting error. The site, donttouchthegreenbutton.com, has since been taken down.

Zack Alcyone, a witness for the Trump campaign, testified that about half of the roughly 600 responses to that online survey turned out to be untrue or spam. Langhofer said the campaign offered only those responses that it could certify as legitimately coming from Maricopa County voters, but Kiley wasn’t buying it.

“How is that a reliable process of gathering evidence?” asked Kiley, who ruled the online surveys inadmissible.

The suit also alleged that ink bleeding through paper ballots led to them being flagged by vote-tabulating machines as containing “one or more overvotes or other apparent defects,” when voters tried to scan their ballots.

Such votes should be set aside for hand-counting, but the suit claims that poll workers pushed, or told the voter to push, a green override button on the tabulating machine that invalidated the ballot instead of setting it aside.

But Scott Jarrett, Maricopa County’s director of election day and emergency voting, flatly rejected the suggestion that Sharpie bleeding would lead to an overvote, when asked by Langhofer.

And in her closing statement, an attorney for Hobbs rejected the claim that pushing the infamous “green button” voided a ballot.

“Pressing the green button means the ballot is cast, not rejected,” said Roopali Desai, the attorney for the secretary of state.

Witnesses for the campaign fared no better on the question of the green button. The handful of Maricopa County voters who took the stand testified that they got an error message from the tabulating machine and were told to push the green button, but they could not confirm that it cost them their vote.

“Do you have any basis to believe your vote wasn’t counted?” Daniel Arellano, a lawyer for the Arizona Democratic Party, asked the witnesses.

Another witness testified that a poll worker pressed the button without his consent, but said he did not want to make a scene, so he just let it go.

“To be honest, I don’t even know if my vote was counted,” he said.

Langhofer pushed back against critics who said there were too few ballots in question for the court to intervene.

“This is a modest claim that we are making. This is about counting votes equally regardless of how you cast them,” he said in his closing statement.

But Desai said the suit does not seem to be concerned with overvotes as much as it aims to “undermine the integrity and credibility of the election.” And Thomas Liddy, a lawyer representing Maricopa County, called the lawsuit’s allegations of “systematic error” a “direct insult” to those who worked to ensure an accurate election in Arizona.

Kiley ended the all-day hearing without a ruling, but said he would take the issue under advisement and hand down a ruling as soon as possible given the urgency of the case.

Claytoonz: Hanging On a Vote Count