Arizona One of Five States To Pass Marijuana Initiatives in 2020

On Tuesday night, Arizonans joined four other states to pass some form of cannabis legalization, when citizens voted in favor of the Smart and Safe Arizona Act, Prop 207, which legalized the use of marijuana for persons over the age of 21.

Citizens of Arizona joined with voters in New Jersey, Montana and South Dakota to approve measures legalizing recreational marijuana, while Mississippi approved the use of medical marijuana for people with “debilitating conditions.”

Smart and Safe passed, with nearly 60 percent voting in favor. As of Thursday, Nov. 5, the measure was leading In Maricopa County by nearly 360,000 votes and in Pima County, it was leading by more than 120,000 votes.

“It appears the vast majority of Arizonans and Americans admit the War on Drugs has been a complete failure,” said Steve White, founder and CEO of Harvest Enterprises, Inc., which supported the measure with nearly $1.5 million in donations. “When you put a significant amount of time and money into the hands of other people, it’s scary. I’m thankful that 60 percent of Arizonans made the right choice.”

Once the final votes are certified, marijuana possession for persons over the age of 21 will be legal, although the rules regulating commercial retail likely won’t be in place before March and expungement of low-level marijuana-related convictions will begin in July. A 16 percent excise tax will be imposed the sale on recreational cannabis, which is expected to generate $250 million in annual revenues to be dispersed for programs including enforcement, school funding and administration of the program through the Arizona Department of Health Services.

AZDHS, or any successor agency to that department, will oversee the medical marijuana program and has been given the task of writing policy within the guidelines of the measure.

Under the new law, individuals can grow up to six plants for personal use, with severe penalties for anyone caught selling cannabis on the black market.

Municipalities will also have control over whether there are recreational retail shops within their jurisdictions, although they are not allowed to ban sales where a medical marijuana dispensary exists.

On Oct. 26, the Town of Sahuarita pre-emptively set restrictions in place, prohibiting cannabis on public property—which is already part of the law—prohibiting recreational retail sales with the exception of a “dual licensee” operating out of a shared location, as well as banning future testing facilities that are expected in response to a state testing mandate that started on Nov. 1, 2020.

Hana Meds is the sole dispensary in Sahuarita, so the restriction would allow that dispensary to open a recreational retail shop in the same location should it receive a dual license from the state in 2021.

On Thursday, Nov. 5, the Town of Oro Valley is also expected to address its policies regarding recreational use and sales within its jurisdiction.

“We are ecstatic to see Arizona enter the 21st century by the passage of Proposition 207,” said Southern Arizona NORML Executive Director Mike Robinette. “The prohibition of marijuana has had an incredibly deleterious effect on the lives of countless Arizonans and has disproportionately affected our communities of color. Proposition 207 rights these historic wrongs and allows Arizonan adults to fully exercise their freedom to consume marijuana responsibly without any fear of prosecution. The state-controlled market created by Proposition 207 will serve to defund the illicit market in Arizona and curtail drug cartel activity while generating up to $300 million dollars a year in new revenue for our state.”

But not everyone is happy with the results of the election.

In a statement released late Tuesday night, Lisa James, chair of Arizonans for Health and Public Safety, called the passage of 207 a “deceit-propelled marijuana measure” claiming an “unelected group of wealthy marijuana insiders wrote the rules for their new industry and almost single-handedly financed the proposition with one goal in mind; they get rich while Arizonans pay the price.”

“It is a sad day, not just because Arizona, especially Arizona’s children, will suffer the consequences of legalizing recreational marijuana—but also because Prop 207 was borne out of deceit and self-interest. The marijuana industry misled voters in order to pass this self-serving measure.”

James further stated that “going forward, parents especially must be on guard to protect their children from the dangers of widespread availability of marijuana. …The successful passage of Prop 207 sends a dangerous message to others who would exploit Arizona voters in an effort to line their own pockets. Prop 207 may have won, but Arizonans lost.”

In 2016, Proposition 205, the Taxation and Regulation of Marijuana Act, lost in by a margin of 51 percent to 49 percent. With the passage of Smart and Safe, Arizona joins 15 states, two territories and Washington, D.C., which have all legalized marijuana for recreational use, while 34 states and two more territories allow medical marijuana. 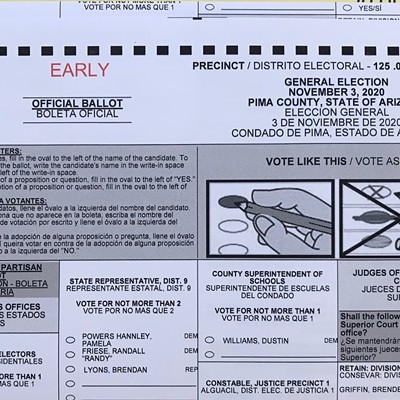 Weed Limit: Pot prohibitionists regurgitate tired tropes from the bygone days of the War on Drugs

Green Thumbs Up: Local grower supplier teams up with cannabis consultants for a learning experience