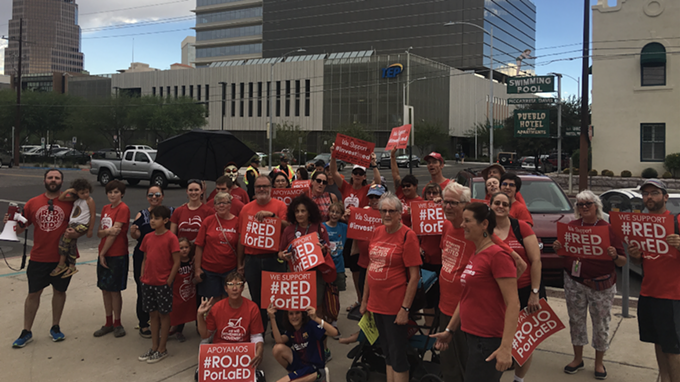 Jim Byrne
Red for Ed supporters join a September 2018 protest against the removal of the Invest in Education initiative from the November 2018 ballot.

While hundreds of thousands of votes still remain to be counted in the state, it appears a proposition to hike income tax on Arizona’s highest earns to fund education programs is likely to pass.

That lead has narrowed from last night, when supporters of Prop 208, Invest in Education, declared victory in their push to approve the 3.5% surcharge on income exceeding $250,000 for single tax filings, or $500,000 for joint filings. The elevated tax rate would go into effect for tax years beginning in 2021.

The funds from Prop 208, also known as the Invest in Education Act, would go toward hiring teachers and classroom support personnel while increasing their base salary and funding supplementary education programs.

After analyzing the first major drop of returns, Invest in Education announced their victory at a virtual press conference last night at 8:30 p.m.

Rebecca Gau, the executive director of Stand for Children Arizona, part of the coalition in support of 208, says the decision to declare victory was made with careful consideration of the likelihood the proposition would pass.

“We were very aware of the kind of lead we needed with the initial results that get released from the Secretary of State, and we looked at our models, and it was pretty clear that although the numbers would change over the night, we knew there was no way that they could make up the difference, and there still is no way they can make up the difference,” Gau said.

Garrick Taylor, the executive vice president for the Arizona Chamber of Commerce, part of the opposition group against 208, said the call was made too early.

“The results might hold, but typically holding a victory press conference 30 minutes after the polls close would be viewed as premature,” Taylor said. “They can do what they want, I'll just say it was unusually early.”

He also expressed concerns about Arizona’s voters leaning toward supporting the initiative, which would bump Arizona’s top individual tax rate from 4.5 to 8 percent, causing the state to rank in the top 10 for the highest personal income tax rate in the U.S.

Once all the votes are counted, if Prop 208 does pass, Gau says it would “represent a huge change that Arizonans needed to see.”

“It’s creating educational and economic opportunities for all Arizona students. But there are provisions in it that will help those who need it most in a lot of ways as well. And it looks like voters agreed,” Gau said. “We're looking forward to a different way of thinking about education in Arizona that's not controlled by politicians, but that respects the needs of the classroom and the needs of our students.”

Prop 208 has roots in the “Red for Ed” movement in 2018 when teachers protested salary and school budget cuts. Invest in Education tried to push a similar proposition that year, but the Arizona Supreme Court removed it from the ballot.

Gau said after the measure failed in 2018, Invest in Education “went back to the drawing board,” meeting with attorneys, business leaders and education professionals to solidify the 2020 ballot measure.

“This was definitely a stronger proposal, both in terms of the funding mechanism and also in terms of how money is going to be spent. It's going to directly impact some really key needs in our state,” she said. “It is a direct result of the Red for Ed movement, and I think it finally gets it over the finish line for all those teachers who hung out at the Capitol in the heat in the spring of 2018.”

How Many Votes Are Left To Count in Pima County?