PHOENIX – Amid a pandemic that changed the way Americans live and vote, Donald Trump and Joe Biden battled for the White House Tuesday night, with Arizona cast in the unusual role as a swing state whose outcome could help decide the election.

Biden, the former vice president, seemed poised to lead a blue wave across the Grand Canyon State and flip this longtime Republican stronghold to a Democratic presidential candidate for only the second time in 68 years.

With 97% of state precincts reporting, Biden was ahead of Trump by about 5 percentage points, thanks in large part to a lead in Maricopa County – the state’s largest – which Trump won by about 44,000 votes four years ago.

Democrat Mark Kelly led Republican incumbent Martha McSally by nearly 7 percentage points in a race that could help determine control of the U.S. Senate. The ex-astronaut addressed supporters around 10 p.m., telling them he was confident that when all votes were counted, “we’re going to be successful in this mission.”

If he holds on, he’d join Kyrsten Sinema as the first all-Democrat Senate delegation from the state since the early 1950s.

In an election largely seen as a referendum on the past four years under Trump – be it his take on immigration, rhetoric on race relations, impeachment for abuse of power or leadership during COVID-19 – more than 2.6 million ballots had been cast in Arizona before polls even opened Tuesday morning. Those early votes exceeded the number of all votes cast in 2016.

“What really motivates people is whether you like Trump or you don’t like Trump,” said David Berman, a political scientist at Arizona State University. “There are a lot of Democrats that would march through hell to get him out of office. Trump is the issue.”

As officials nationwide grappled with a rise in early voting and scrambled to verify and tabulate ballots, it seemed unlikely that either Biden or Trump would secure the 270 electoral votes needed to win by the time Americans went to bed Tuesday night.

Some voters prepared for Election Day morphing into “Election Week,” and braced themselves for possible protests no matter which candidate wins. A few Arizona businesses were boarded up as a precaution, and Phoenix Police Sgt. Maggie Cox said authorities would be monitoring for any problems.

After seeing the early results, Montana Ludlow, 23, of Queen Creek said she was both excited and surprised. Ludlow voted for Biden, saying she wanted Trump out because of his stance on LGBTQ+ rights and Planned Parenthood funding.

But she remained worried about the potential for unrest.

“I have seen a couple of posts on social media already from Republicans saying that it’s still too early to really settle what the end results will be,” Ludlow said by text late Tuesday night. “I wouldn’t be surprised in any way if there was a strong negative reaction.”

Still others were prepared to wait for an outcome, and hoped the public could stay calm while the process plays out.

“I’m excited to learn the results however long they take,” said Pavi Shetty, a poll observer in Queen Creek. “I can be patient.”

It took six days for Sinema to be declared the winner over McSally in the 2018 Senate race. McSally actually held a slim lead on election night, but once all votes were counted, Sinema won by fewer than 56,000 votes.

“When elections are close, it always takes days to have the outcome,” said Alex Gulotta, state director of the voting rights organization All Voting Is Local. “There’s nothing improper or questionable about that. That’s how the process works, because we want to count every vote.”

Election Day 2020 unfolded amid a pandemic that has killed more than 1 million people globally – including over 230,000 in the U.S. and 6,000 in Arizona – and cost millions their jobs.

COVID-19 was at the forefront of many voters’ minds, with cases on the rise again both nationally and in the state. Only a month ago, Trump himself was diagnosed with the virus. After three nights in the hospital, he was released and soon returned to the campaign trail – maskless before packed crowds.

Lessie Serrano, 62, a former Democrat turned Republican, showed up at a Glendale polling site to support Trump. She brought two masks for extra protection, but said everything went smoothly.

“I think we are all just nervous because this is the quietest line I’ve ever been in,” she said.

Jared Bahley, 39, said he was “Trump all the way” when dropping his ballot at the Signal Butte Marketplace in Mesa.

“Most people are scared to voice who they are for right now, because it can be such a trigger. People get so emotionally invested in all this,” said Bahley, who works as a distribution account manager.

Many voters acknowledged they were, indeed, emotionally invested, and they blamed Trump for failing to lead the country through the pandemic.

At a gathering in Phoenix to rally turnout among Latinos, Kristin Urquiza, wearing a face mask that read “Vote,” expressed rage over the state’s and country’s response to the virus.

Urquiza, 39, co-founded an organization called Marked by COVID after her father died of the disease in June. She blames Republican politicians, including Trump and McSally, for underplaying the danger.

“Whenever we let the disease run its course that means that more Latino, Black and Indigenous siblings of ours get sick, have long-term health consequences and die,” she said.

On the Navajo Nation, which has been devastated by COVID-19, Franklin Sage is a self-described independent who has voted for both Republican and Democratic candidates.

This year, he said, he went with Democrats down the ballot, primarily because of his dissatisfaction with Trump’s handling of the pandemic and his stoking of racial division.

“I think he doesn’t think it (the pandemic) is a huge deal,” said Sage, director of the Diné Policy Institute in Tsaile.

“He goes around claiming that he survived. Well, if you’re the president of the United States, you’re going to get the best health care in the world,” Sage said, adding that far too many others weren’t so lucky, “especially on the reservation.”

The Navajo Nation has a per capita COVID-19 death rate higher than any U.S. state, statistics show. More than 580 people have died on the reservation, home to 173,000 people.

Sage said Trump’s downplaying of the virus hasn’t sat well there, adding, “Our health care system is not equivalent to most affluent communities.”

Four Directions, a Native voting rights organization, filed a lawsuit in August attempting to ensure the 67,000 eligible voters in the Arizona part of the reservation had a chance to vote safely by mail during the pandemic.

Arguing that it can take six full days for a ballot sent from tribal lands to reach a county recorder’s office, the lawsuit asked that ballots received through Nov. 13, instead of Nov. 3, be counted. The case was rejected.

Although obstacles to voting are always an issue, the virus was a new variable this year. The state’s official guidance for mitigating COVID-19 risks at polling places emphasized adequate personal protective equipment for poll workers, physical distancing and masks.

Those under quarantine with COVID-19 who hadn’t requested an early ballot were encouraged to reach out to their county’s special election board for a special ballot delivery; voting by video also was a possibility in certain circumstances.

Gulotta, of All Voting Is Local, said the precautions ensured that polling places were “safe and sanitary,” and first-time voter Jay Cay said he felt secure after voting in downtown Phoenix.

“They did a fantastic job … making sure that everything is clean, sanitized, everybody’s got their masks on, staying 6 feet apart,” said Cay, who felt the need to vote in person because of recent problems with his mail. Millions of others went the opposite route.

While turnout was big, some out-of-staters reported having issues voting by mail from afar.

Diana Solorio, spokeswoman for the Maricopa County Recorder’s Office, said the office had received calls from people wondering why they never received mail-in ballots, but such calls come every election and those cases may be a result of mishandled paperwork on the part of voters.

Rhetta Eubanks, a University of Notre Dame student from Chandler, said she requested her ballot be mailed but it never arrived, despite a confirmation text from the county that it would be sent. Ultimately, she resigned herself to sitting out the election.

“To not be able to vote … is very upsetting.”

In the past four years, the number of registered voters in Arizona has increased by nearly 700,000, according to state data, and political analysts said a turn from red to blue was contingent on how many new voters, as well as Latinos and young voters, cast ballots.

Luis Ávila, founder of Aquí Se Vota, attributes Arizona’s transition to battleground state to groups like LUCHA and Mi Familia Vota, which have worked to mobilize the state’s burgeoning Latino community for over a decade.

He said the persistent “sleeping giant” narrative – that Latinos overwhelmingly don’t vote, despite the impact they could have both nationally and at the local level – is a thing of the past.

“It’s not true. We are here, and we’re voting in really high numbers compared to the last year,” Ávila said. “Despite the social inequities, our community is coming out in historic numbers, and that’s the story that is missing.”

In all 50 states, the share of white eligible voters has declined in past years, while Hispanic voters are increasingly a larger percentage of the electorate, according to a Pew Research Center analysis.

From 2010 to 2019, Maricopa County was the fastest-growing in the nation, adding more than 600,000 people, according to the Census Bureau.

All of these shifting demographics concerned some Republican voters.

Chad and Nancy Boukhzam, both 36, of Cave Creek showed up at 9 a.m. to vote in person for Trump – “the guy for our country,” as Chad put it. Nancy was nevertheless worried that Arizona would go blue, noting she’d seen more Democratic supporters in her town than in years past.

“Everyone coming from California: Please stop bringing your politics,” she said. “They are all leaving their states and coming here and voting the same way.”

But eligible voters are not always eventual voters. For example in 2016, according to Pew, the number of eligible Latinos who didn’t vote nationally – 14 million – exceeded the number of those who did – 12.7 million.

Jasmin Estrada and Sinahy Mendoza spent the last two months canvassing with Mi Familia Vota, knocking on doors seven days a week. Despite their dedication to getting out the Latino vote, they weren’t able to cast their own ballots – they’re both 16.

Estrada started working with Mi Familia Vota after seeing how excited her 66-year-old grandpa, who’s from Mexico, was about becoming a U.S. citizen and voting for the first time this year. This Election Day, she started knocking on doors at 5 a.m.

“I think it’s very inspirational, especially for people who can’t vote yet like me,” she said, looking ahead two years, when she, too, will be able to vote. “It just makes me want to be part of the democracy when I get older and have a voice.”

Like Estrada, Michelle Viscara, 17, of Los Angeles also couldn’t vote this go-round, but that didn’t stop her from doing her civic duty. Viscara volunteered to work the polls at Dodger Stadium to aid voters in both English and Spanish, and to get a preview of what voting is like.

As a Latina, she worries about racial inequality in the U.S.

“How can we treat people equally when not everyone has equal rights?” she said.

She hoped her experience this Election Day would help her be “better prepared and informed” when it’s time to cast her ballot, and she said the past four years had taught her a lot.

“It’s been a lot of, ‘How can people do that?’” she said, “and the fact that people can do some cruel things to other people.” 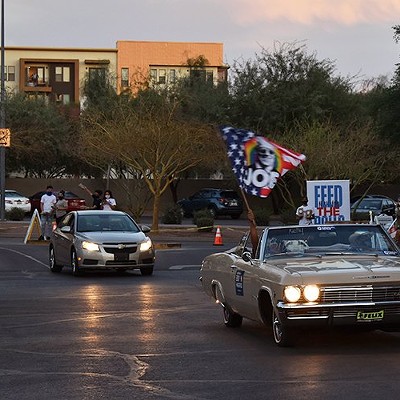