In the race to replace Republican Ally Miller on the Pima County Board of Supervisors, Democrat Rex Scott is out with an early lead over Republican Steve Spain with 53 percent of the vote. If Scott, a former school administrator, can hang onto his lead, this will be an upset victory for Democrats in Pima County tonight. District 1, which includes the Catalina Foothills as well Oro Valley and Marana, is a Republican-leaning district.

In District 2, Democrat Matt Heinz, who defeated longtime Supervisor Ramon Valadez in the August primary, has captured 72 percent of the vote against Republican Anthony Sizer.

In District 3, Democrat Sharon Bronson appears to be headed for a seventh term on the board as she had won 63 percent of the against GOP challenger Gabby Mercer.

In District 4, Democratic challenger Steve Diamond is giving incumbent GOP Supervisor Steve Christy a run for his money with an early lead capturing 51 percent against Christy 49 percent in this heavily GOP district.

In District 5, in the race for the open seat previously held by the late Supervisor Richard Elias, Democrat Adelita Grijalva had captured 77 percent of the vote against Republican Fernando Gonzales.

Biden, Kelly Ahead as Early Ballots Totals Released in Maricopa and Pima Counties 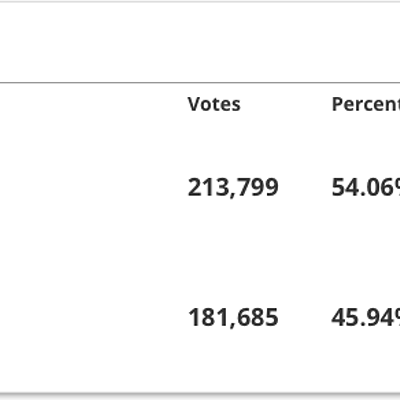