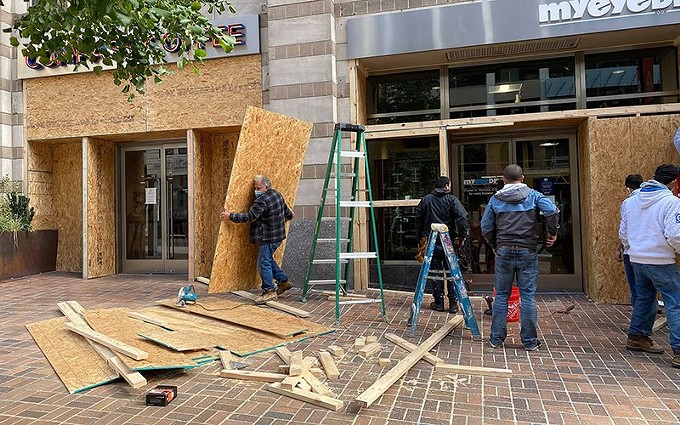 Mythili Gubbi
Workers board up shops and office buildings on blocks near the White House Friday, in anticipation of possible unrest after Election Day.


WASHINGTON – National and local law enforcement agencies are preparing to respond in case civil disturbances break out after Tuesday’s elections, which experts fear may have a “different venue for challenging election results, namely in the streets.”

And that may be true whichever side wins.

Seth Jones, director of the Transnational Threats Project at the Center for Strategic and International Studies, sees the possibility of “radicalized white supremacist militias and other related individuals” rioting in the event of a win by Democratic presidential nominee Joe Biden. But he can just as easily see “street-level violence for political purposes” if President Donald Trump wins re-election.

Local, state and federal police agencies did not address the possibility of violence next week, saying only that they will be ready to ensure the safety and well-being of residents and protect protesters’ rights to “peaceful assembly.”

That was echoed Thursday by Gov. Doug Ducey, who said he does not expect unrest but that the state will be ready if it comes.

“It’s our hope and expectation that there will not be civil unrest. That we will have a peaceful outcome,” Ducey said.

Maj. Kyle Key, communications director for the Arizona National Guard, said in a statement this week that Arizona Guardsmen are “ready to respond when needed” if a civil disturbance occurs.

The Arizona National Guard, in addition to protecting the state, has a potentially larger role dealing with post-election fallout. In mid-September, the National Guard designated the Arizona and Alabama Guards as regional response units that can be called on to assist local law enforcement in other states if a “civil disturbance” does occur.

“The National Guard is prepared and ready to respond to the situation, whatever that may be, in support of civil authorities,” said Army Brig. Gen. Nick Ducich, vice director of operations for the National Guard Bureau.

The Arizona unit is assigned to assist West Coast states and Alabama will assist on the East Coast. Ducich said the designation of the regional response units was not directly linked to possible post-election violence, but that they were identified to “to enhance the safety and protection of the people and property” in any case of unrest.

“This concept is not tied to the election,” he said. “This is what we do, it is being prepared and ready.”

That was echoed by a spokesman for Ducey, who said the order is “not Election Day related” but allows the Arizona National Guard to be ready in case another governor asks for help, as they did in August when they deployed to Wisconsin to respond to police-violence protests.

But experts said the election poses the biggest threat on the horizon.

“We know that rhetorically, in the extremist chatter we are currently monitoring, there is talk of civil war,” said Joanna Mendelson, associate director of the Anti-Defamation League’s Center on Extremism. “This is a political landscape, perhaps, the likes of which our country has never seen before.”

Mendelson said rhetoric surrounding the election has shown the divide in the nation that has pitted groups against one another, and that has the potential to spark politically motivated violent extremists. The Department of Homeland Security said it was “particularly concerned” about the threat of “white supremacist violent extremists” in the Homeland Threat Assessment for 2020 released this month.

“What we’ve seen is this apocalyptic portrayal of the presidential election, so that the extremes on either side assess that the future of the United States will either be this great country or we’ll see a collapse of the U.S. as we know it,” Jones said.

In Washington, D.C., on Friday, businesses and office buildings were being boarded up in advance of Election Day. Fencing remained around Lafayette Square, just north of the White House, where it was erected during Black Lives Matter protests this summer.

Local police agencies, including the U.S. Park Police and the Metropolitan Police Department, said they are working with federal agencies and other local departments to ensure safety protocols are in place.

“The U.S. Park Police is committed to the peaceful assembly and expression of First Amendment rights,” said Sgt. Roselyn Norment, a Park Police spokesperson, in a statement. “We are continuously working with local and federal partners to ensure that safety protocols are in place for all permitted events and other first amendment activities.”

The city has already announced that streets will be closed in a roughly 10-block radius around the White House all day Tuesday and Wednesday. And the National Park Service has already issued permits for a number of protests near the White House for most of next week, according to news reports.

“All citizens in the District of Columbia are afforded the opportunity to vote on any given Election Day,” said Metropolitan Police Department spokeswoman Brianna Jordan. “The Metropolitan Police Department collaborates with our local and federal partners on a regular basis, to ensure the safety and well-being of all residents and visitors to the District of Columbia.”

Although she is worried about what could happen after the vote, Mendelson stressed that voters should not be frozen by fear.

“We have solid infrastructures in place in our process,” she said. “A lot of checks and balances, and people who want to see positive change, underscoring the importance of getting out and voting and flagging the things that they see that raise suspicions.” 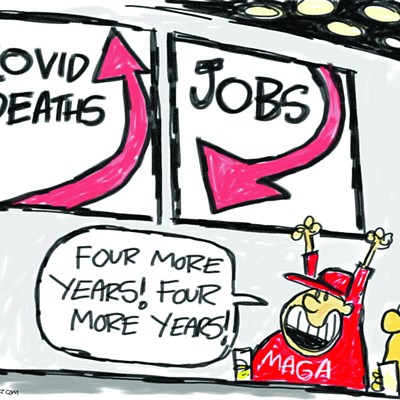