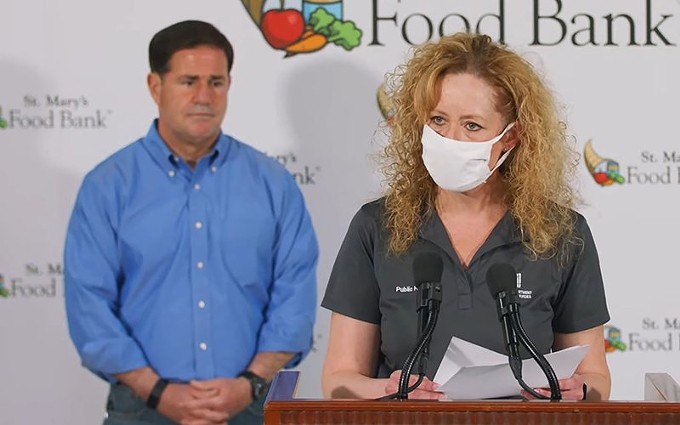 Arizona Governor's Office
Gov. Doug Ducey and Arizona Department of Health Services Director Dr. Cara Christ spelled out actions to confront a recent surge in COVID-19 cases in the state, and encouraged Arizonans to keep up their guard. They also defended the decision to toughen standards for schools dropping in-person teaching.


An Oct. 29 Cronkite News story mischaracterized the Arizona Department of Health Services policy on in-person versus virtual schooling during COVID-19. The policy sets recommended guidelines for local schools, which have the ultimate authority on how to proceed.

WASHINGTON – The Ducey administration defended its decision Thursday to make it harder for Arizona schools to revert to virtual education, from in-person or hybrid schooling, in the face of surging COVID-19 cases.

Gov. Doug Ducey said the decision to require that three different criteria are met – the old standard was just one of the three – before schools consider returning to online teaching was made with input from “the superintendent of public instruction and education leaders.”

But in a statement Thursday, a spokesperson for the Arizona Department of Education said that the department “was not part of the decision-making process” on the change.

The back and forth comes as new COVID-19 cases are surging in the state, with more than 5,700 new cases reported this week alone and 49 deaths attributed to the disease.

As of Thursday, the state had confirmed 242,480 cases of COVID-19 since the virus was first discovered in Arizona in January, and had recorded 5,918 deaths from the disease, according to Arizona Department of Health Services data.

Ducey’s comments came as he and AZDHS Director Dr. Cara Christ toured St. Mary’s Food Bank in Phoenix, after he announced $1.6 million in funding toward food banks across the state.

They expressed optimism that mitigation strategies – mask-wearing, social distancing and flu vaccinations, among others – would be able to curb the current surge but said that Arizonans need to still be on guard. They also said the state is taking steps to protect vulnerable populations, including elderly and low-income residents.

“We ramped up as we’ve known more things that we can, not only to protect the most vulnerable, but try to allow us to live in the safest way possible,” Ducey said. “Part of that is getting our kids, where we can, back inside a classroom.

“So, anything that’s been done inside our schools has been done in collaboration and cooperation with public education leaders and public health officials,” he said.

The health department last week tightened the criteria schools must meet before they consider reverting from in-person or hybrid education to virtual learning. Where they previously could send kids home after meeting one of three criteria, schools now must meet all three benchmarks: more than 100 new cases per 100,000 population, a positivity rate of 10% and hospital visits with COVID-like illness higher than 10%.

“This was done with … the superintendent of public instruction and education leaders,” Ducey said.

But the Education Department spokesperson said in an email that the change in standards for moving to virtual learning was “presented in the working group as a policy update that was final. ADE was not part of the decision-making process.” As such, she said, the department “was unable to provide feedback or recommendations” on the change in policy.

Christ on Thursday reiterated the communication between her department and its “partners.” She said the change came after school officials “expressed concerns about the instability that would occur if recommendations to move back to virtual learning were based on a change in a single benchmark, especially in smaller, rural counties.”

That’s what drove the decision to recommend that “all schools meet all benchmarks before moving from in-person hybrid or virtual learning,” she said.

News reports have already cited multiple COVID-19 cases and outbreaks since Arizona schools returned to in-person instruction, prompting temporary shutdowns, students in quarantine and many messages to parents and faculty.

“We remain on high alert,” Christ said. “Now is not the time to let up.”

While he didn’t downplay the severity of the problem in Arizona, Ducey dismissed comparisons to states like Wisconsin, which reported 4,131 new cases and 57 deaths on Thursday. Arizona reported 1,315 new cases and 13 deaths Thursday.

“What we’re focused on right now is protecting the most vulnerable through the pandemic,” Ducey said.