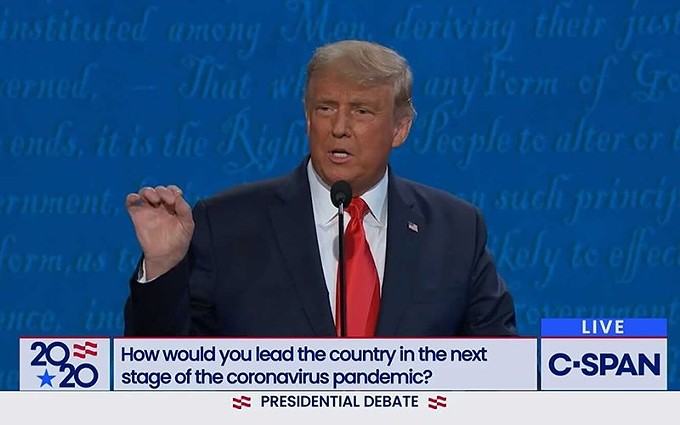 C-SPAN
Asked at the presidential debate about how to handle COVID-19, President Donald Trump cited Arizona as a state that had seen a spike in cases, and “it’s now gone.” But in each of the states he cited, including Arizona, new cases have started to surge again.

Except that it’s not.

New cases are up – twice in the past week they topped 1,000 – the rate of positive tests rose as did hospitalizations – although currently well within the current capacity of hospitals. That led Arizona Department of Health Services director, Dr. Cara Christ, to caution Arizonans on Thursday, “Don’t let down your guard.”

“Over the past few weeks in Arizona, reported cases and percent positivity have been increasing,” Christ wrote in the blog post that went up about an hour before the presidential debate started.

Trump brought up Arizona – and Texas and Florida – early in the debate, when he and Democratic nominee Joe Biden were asked how they would lead the country “during this next stage of the coronavirus.”

While all three states have seen infections drop from spikes earlier in the year, all three are also seeing cases climb again, often sharply, as winter begins.

Arizona had been a national hotspot for coronavirus infections this summer before seeing steady decreases in recent months. But the trend started to turn a few weeks ago, when the health department reported an increase in the percent positivity, an indicator of increasing community spread.

AZDHS has also reported a steady increase in new infections over the last month. The seven-day average of new cases rose from 502 cases in the first week of October to 688 per day the following week and 796 cases per day last week. The average stood at 946 for the first five days of this week.

“Everyone in the whole country knew, for about a month, Arizona was the worst,” said Will Humble, executive director of the Arizona Public Health Association. “Not only the worst state in the whole country in terms of cases per capita, but we had the biggest issues within our hospital system in terms of capacity, and we might have even been the worst in the world. Arizona was in headlines for a month.”

With the rising infection rate, Arizona hospitals are also worried about a possible uptick in COVID-19 hospitalizations. Currently, COVID-19 patients occupy 9% of hospital beds in the state, up from just a few weeks ago, but Christ said hospitals still have “capacity in their inpatient and intensive care unit beds and ample ventilator availability.”

“We are keeping a very close eye on the data and continue to encourage the use of facial coverings when you aren’t able to properly socially distance yourself from others, staying home when sick and following public health guidance to keep our Arizona communities as healthy as they can be during this pandemic,” Ward said in an email.

Despite the fact that overlapping flu and holiday seasons provide a recipe for spreading COVID-19, Humble said that updated mitigation strategies enforced by the state, along with normalization of masks, can keep the state from reaching the high case numbers that would mirror July.

“At least many, if not most, of the counties have face-covering ordinances, and face coverings have been a lot more normalized than they were back in June,” Humble said Friday. “At least now there’s some modest enforcement of the mitigation measures by the state.

“I think it could be a lot more robust than it is, but that’s a difference between now and June,” he said.