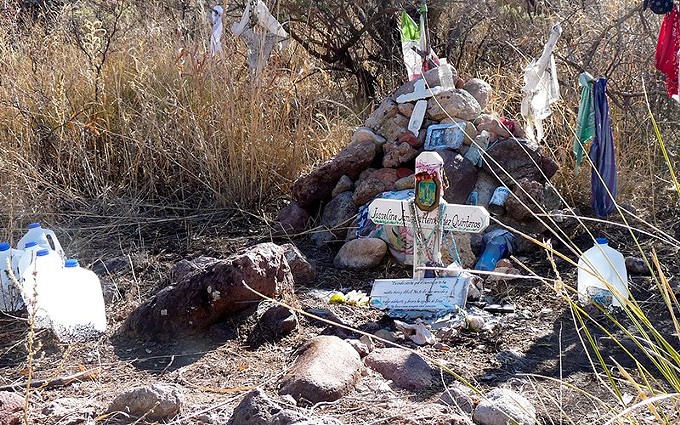 Bob Gaffney, Creative Commons
A makeshift memorial in 2011 at the site where a migrant teen’s body was found in Arizona. Remains found in the desert through the first three quarters of this year have already exceeded all of 2019, and are at the highest rate since 2013, a new report says.


WASHINGTON – Remains of 181 migrants were found in the Arizona desert through the end of September, 37 more than in all of last year and the most since 2013, according to the group Humane Borders.

The rise in migrant deaths comes during a year of intense heat and little precipitation for Arizona – but also at a time when the number of people caught crossing the border has fallen sharply.

Humanitarian groups and county officials along the border blame the rising deaths on years of border security policies that have pushed migrants toward riskier routes into the U.S. – along with this year’s harsh weather, expanded border security and COVID-19 health restrictions.

“It’s kind of like stopping water: If you block it up in one place, it’s going to go somewhere else,” said Pima County Sheriff Mark Napier. “We’re seeing the results of that as an increase in deaths.”

The number of deaths is tracked by the humanitarian group Humane Borders, using data from the Pima County Medical Examiner’s Office and other public sources. The group, which releases numbers quarterly, recovered remains of 181 people in the desert through September, with 85 of those cases coming in the last three months alone.

Phoenix had its hottest summer on record in 2020, which was also one of the state’s driest years, according to the National Weather Service. It said the just-ended monsoon season was the sixth-driest since 1895, with 0.10″ of rain measured. Almost 94% of Arizona is currently in severe drought, according to the U.S. Drought Monitor.

Napier said the heat alone is not what kills migrants – the lack of water is the main issue.

Sophie Smith, a co-founder of the Arivaca-based humanitarian organization People Helping People, said what water is available to migrants is unsafe.

“There are few to no water sources out here,” Smith said. “The water sources that do exist are usually cattle ponds for ranchers out here and are contaminated, so it’s really common for people to drink water that’s dirty to survive.”

Smith believes migrants keep coming because they have little choice, “fleeing not only economic violence and poverty that create circumstances that are very deadly, but literal threats to life” back home.

Beginning in 1994, she said, immigration enforcement resources were steered toward ports of entry and safer areas to cross the border, pushing migrants to cross in increasingly dangerous areas. She said that’s no accident.

“It’s written into the policy,” Smith said. “The language of the policy explains that border patrol aims to put people into hostile terrain where they may find themselves in mortal danger as a way to diminish crossing levels as a deterrent.”

A new wrinkle this year is the imposition of Centers for Disease Control and Prevention policies, aimed at checking the spread of COVID-19, which allow border patrol agents to immediately expel migrants to Mexico.

Where migrants used to be released in border cities like Nogales, Smith said, they may now be wind up in tiny border towns “with few to no resources” – leaving them with few places to turn but back north.

Risks of crossing the border range from the desert climate and border patrol to coyotes – both the four-legged kind and human traffickers. But Santa Cruz County Sheriff Tony Estrada said, for many, the threat back home outweighs the risk of crossing.

“You wonder do these people… how can they tolerate that?” Estrada said. “Desperation and hope drives them… These have got to be a real special kind of people that are willing to do just about anything if you give them a chance.”

That chance has been increasingly narrowed by the growing border wall. While Napier believes the wall is important for the safety of Arizonans, he acknowledges that it has forced migrants into “more remote and dangerous” areas to cross.

Sometimes it’s not the authorities who find migrants, he said, but migrants who seek out authorities. Napier said more than 85% of his calls to Customs and Border Protection are to help rescue migrants who called 911 because they are stranded in the desert without water.

Sometimes authorities find migrants. And sometimes they find nothing more than a “leg bone or part of a skull.”

“It’s not like a National Geographic special, and you are on some archeological dig and you come up with human remains,” Napier said. That was “somebody’s mother, somebody’s son, somebody’s father.”

As an immigrant himself, Estrada said he admires what migrants and their families go through for the chance of a better life in the United States. But he calls it a “journey forged in desperation.”

“You wonder who that person was, what that person went through, who victimized them, obviously,” Estrada said. “But a lot of cases they’re not victims of anything other than the weather, the climate and the terrain.”

Now Playing: Solid 'On the Rocks' Screening at RoadHouse Cinemas and Streaming On Apple+