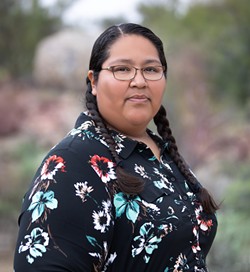 The candidates for Pima County Recorder certainly have different approaches to the office, but one candidate recently criticized the other after third-quarter campaign finance reports were released.


Republican candidate for county recorder Benny White posted a photo of Democratic candidate Gabriella Cázares-Kelly’s cash operating expenses that show she paid herself with campaign funds. The post has since been deleted.


“My opponent pays herself from her campaign account,” the post read. “The saddest part of this in my mind is that she is taking $5 and $10 donations from people who are reported as being unemployed and then taking their money for her own benefit. We just see things differently.” 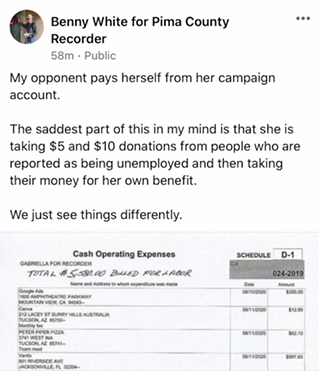 Cázares-Kelly was quick to respond by acknowledging her opponent’s criticism in her own Facebook post and says she pays herself a $1,290 biweekly salary to support herself while she runs for county recorder.


“I do not come from a rich family. I am not independently wealthy, I am not yet retired, and my household cannot survive off of only one income,” she wrote in a Facebook post. “My reality is that I am a working-class candidate bringing my unique perspective and experiences into this leadership role.”


Cázares-Kelly says she paid herself $4,580 in campaign funds from Aug. 19-Sept. 18. One reported expense in the finance report shows a payment of $1,000 on Sept. 2, but her campaign says it was never received, and a later disbursement on Sept. 18 was used in its place.

“There is no express prohibition in Arizona on candidates drawing salaries from campaign monies,” Sophia Solis, a spokesperson for the Arizona Secretary of State’s office, wrote in an email.


“Arizona law defines permissible ‘operating expenses’ as ‘staff salaries … and similar items necessary to keep the campaign in operation,’ which could include candidate salaries,” Solis wrote. “While Arizona law applies to local and state candidate campaign finance activities, to the extent that authority from the Federal Election Commission on this issue is persuasive, the FEC permits candidates to draw a limited salary from campaign monies, provided that the salaries do not exceed the lesser of the amount they earned the year prior to running for office, or the minimum salary paid for the office the candidate seeks to hold.”


According to Cázares-Kelly, her salary last year was $54,000 annually. According to Arizona Revised Statutes, the county recorder has a starting salary of $67,800.

“I just found it curious. I've never seen anyone take campaign funds for their personal salary,” county recorder candidate White said. “I don't have any comments on her postings because I've not read them.”

After White made the post on Wednesday, Cázares-Kelly says her campaign has exceeded its fundraising goal.


Within 24 hours of White’s post, Cázares-Kelly says her campaign raised $18,541—the biggest fundraising day of her entire campaign. As of today, the campaign has raised $21,391 online, according to Cázares-Kelly.


“People were very motivated and inspired by the posts that we shared about some of the barriers that I've had being a working-class candidate, and they wanted to show that by donating more money,” Cázares-Kelly said.


The Democratic candidate for county recorder first began running in November 2019, when she was fully employed as a college and career readiness counselor on the Tohono O’odham Nation. When her employment contract ended in late June, her backup plan to substitute teach was quashed by the pandemic.


Without a means of employment while engaging in the time-consuming process of organizing a campaign, Cázares-Kelly quickly felt the pressure of running as a working-class candidate.


“My husband works full time, we have two children, we have a mortgage, we have two cars, we have just an everyday lifestyle, two-income household. You can only float for so long without employment.” Cázares-Kelly said. “Because I'm still actively working and not able to commit to anything, I wouldn't be sworn in until January. So I would have, from the end of June to January, which is a total of six months without any income whatsoever. It started to feel really crushing, and I didn't know quite what to do.”


She coasted off her savings for a month but began talking to advisors on the logistics of using campaign funds to pay herself a salary.


“I started talking to organizers and trusted individuals throughout the state, and everybody kept saying, 'Well, why don't you pay yourself? Why don't you just draw a salary?' They made it sound so simple. And I thought, I don't know if I should do that or not,” Cázares-Kelly said. “I was encouraged to by a lot of people that thought it was just really practical. It solved all of my concerns, so I reluctantly came to a point where I talked it over with my team and we discussed it.”


After considering what she values as compensatable, Cázares-Kelly followed through with the decision.


“I didn't come to this decision lightly, it wasn't just something that I made a decision on very quickly, there was a lot of discussion about it, a lot of thought. There was a lot of emotion that was put into it,” she said. “We've had people very emotional about the impact of our campaign in particular, and so we decided that we would value that work that we are always talking about, making sure that we value the work of black and brown people with their specialized knowledge, reaching out to the community the way that I have been and that we value it by actually putting a dollar amount to and paying.”


“I was more concerned about the donations from the Tohono O'odham nation that were reported as an individual contribution. I'm not sure that a sovereign government is an individual for purposes of campaign contributions,” he said.


His opponent believes the contributions from the Tohono O'odham Nation are a reflection of her campaign’s “relationship building we have worked so hard to continue.”


“County candidates do not normally receive financial support from tribal entities, but our campaign believes it is because they do not normally reach out to the tribes,” Cázares-Kelly said. “The Tohono O'odham Nation has registered lobbyists and donates to state and federal campaigns regularly. We were elated to receive the Tohono O'odham Nation's financial contribution and consulted the county for advice on how to report it. There was no clear procedure in Pima County's antiquated reporting system for how to report the donation. However, the lack of procedure is no reflection on the validity or ethical nature of the donation. It's yet another indicator that the system was not built for Native American participation.”


“I said the saddest thing about that was that she takes money from people who report themselves as being not employed in amounts of $5 and $10, which I'm sure are very hard for those folks to come by. And then she writes herself a check out of that campaign fund,” White said.


Cázares-Kelly says one of the main reservations she had about using campaign funds for her salary centered on the idea of taking money from vulnerable persons.


“I really, really do not like to talk about growing up poor, but it's absolutely a part of my story. When you grow up poor, you always worry about that burden that you're asking your community. So when I first started getting into fundraising, I talked with a couple of people, we talked about my discomfort, and they asked me, ‘What is your discomfort with this?’ And I said, ‘I've asked people in vulnerable communities to donate to my campaign.’”


“They corrected me, and they're like, they're not donating to you. They're donating towards a movement. They're investing in community change. And it's not up to you to decide who participates and who doesn't.”


The county recorder candidate says those relatively low-dollar fundraising donations are what her campaign thrives on.


“We have always talked about how important the grassroots dollars are $5, $10, $25 because we specifically have not been courting corporate money,” she said. “We haven't been asking for people who make decisions that are bad for our communities to contribute to my campaign. We're asking people who are interested in positive community change to invest in our community in whatever way that they can.”


Overall, Cázares-Kelly doesn’t regret paying herself with money from her campaign and hopes the conversation around the working-class running for office continues to evolve.


“This is part of an ongoing conversation that we see on a statewide level, on a national level. I think that it really makes a difference for who is able to run for office, and who is able to serve us. When you get further away from working-class people with working-class issues, you start to feel a lack of representation because they no longer remember what it's like, what the daily struggles are of a working-class person just to participate in our democracy,” she said. “The response from the community has been just so powerful, and they're ready for change, and I'm ready too.”