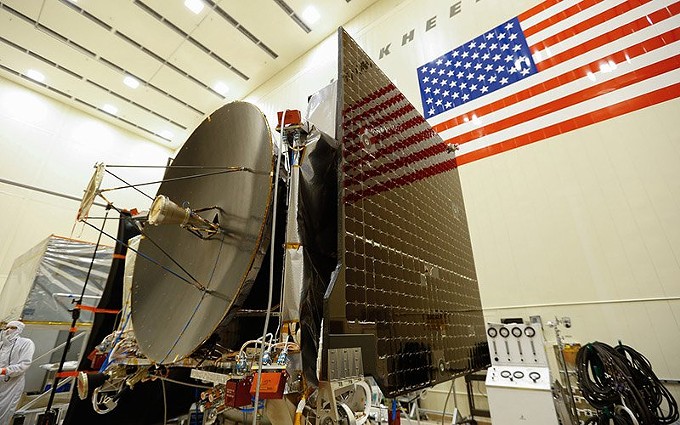 Lockheed Martin
Final assembly in 2015 of the OSIRIS-REx spacecraft, which launched in 2016. University of Arizona teams had been working on the project for more than a decade when it reached a near-Earth asteroid, Bennu, this week and executed a touch-and-go mission to briefly "tag" the surface, collect soil samples and head back to orbit.


WASHINGTON – After more than a decade of work, $800 million and 200 million miles of space travel, it all came down to six seconds.

That’s how long OSIRIS-REx spent on the surface of near-Earth asteroid Bennu, collecting a small sample of soil before lifting off again for a return trip to Earth. But those six seconds were enough to get University of Arizona researcher Dante Lauretta’s head spinning.

“I must have watched it about 100 times last night before I finally got a little bit of shuteye,” Lauretta said of the video showing the spacecraft’s Touch-And-Go Sample Acquisition Mechanism pushing up a plume of debris from the asteroid’s surface. “And then I dreamed of a wonderworld of Bennu regolith particles floating all around me.”

Lauretta was not the only one hailing the apparent success of NASA’s Origins, Spectral Interpretation, Resource Identification, Security, Regolith Explorer – OSIRIS-REx – as it successfully touched down Tuesday night on Bennu, a maneuver one NASA official said “made humanity proud.”

Bridenstine’s comments came on a call from NASA Headquarters to the Lockheed Martin Space Facility in Littleton, Colorado, where mission scientists late Wednesday shared the images from the encounter with the 500-meter diameter asteroid a day earlier.

Bridenstine congratulated the team on the “stunning achievement” that broke NASA records for orbiting the smallest object ever orbited, and doing so at a lower orbit than has ever been achieved before.

“It went as well as could have gone, and the OSIRIS-REx mission outperformed in every way,” Bridenstine said.

On its face, it is not a glamorous mission: Bennu is a dark, rocky asteroid just 500 meters in diameter. But it is also ancient and largely unchanged since its formation, which is believed to have happened in the first 10 million years of our solar system – more than 4.5 billion years ago. That makes samples of Bennu valuable as possible windows into the formation of the solar system.

The already-tricky mission was made trickier after OSIRIS-REx’s close-up images of Bennu this year showed it to be much rockier than originally thought. NASA said that reduced a landing area that had been about the size of a 100-car parking lot to a spot just two parking spaces large.

Researchers watched anxiously as images from the Tuesday night landing started arriving in Denver about 2 a.m. Wednesday. Lauretta gave a play-by-play description of a potentially obstructive 7-inch rock on the surface that was instead “crushed” by the spacecraft, which then went about its business of collecting samples.

The image that kept Lauretta awake that night was video of the Touch-And-Go Sample Acquisition Mechanism – TAGSAM – arm extending to the asteroid and blowing out a puff of nitrogen that kicked up a plume of debris that was collected by OSIRIS-REx.

Lauretta said data coming in now should let them know by this weekend if the mission collected the minimum 60 grams of material needed from the asteroid. If not, OSIRIS-REx is equipped for another two tries before leaving Bennu’s orbit and heading back home.

It’s already been a long mission for the University of Arizona team, which was working on the project before NASA signed on in 2011. OSIRIS-REx launched in September 2016 and had been heading toward Bennu since.

“I’ve been working on this mission for about 12 years to the date, and it’s definitely a great capstone,” Heather Enos, deputy principal investigator for the mission, said Monday before the landing.

But Lauretta said this week’s accomplishment, however momentous, was merely a checkpoint. The real work lies ahead, in getting the samples 200 million miles back to Earth so they can be analyzed.

Enos said that some of the biggest moments will come in 2023 when OSIRIS-REx is expected to crash in the Utah desert with its cargo.

Lauretta agreed that the mission will get longer. But he’s not complaining after the achievements of this week, which he said could “serve as a model for what we can do as human beings when we unite in a common vision.”

“All we have left to do, to deliver on our promise to the agency, is get that sample safely back to the Earth, get it into our laboratories, and answer the fundamental questions about the formation of our solar system and why Earth is a habitable world,” he said. 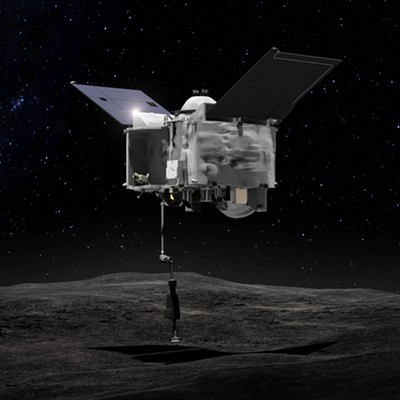