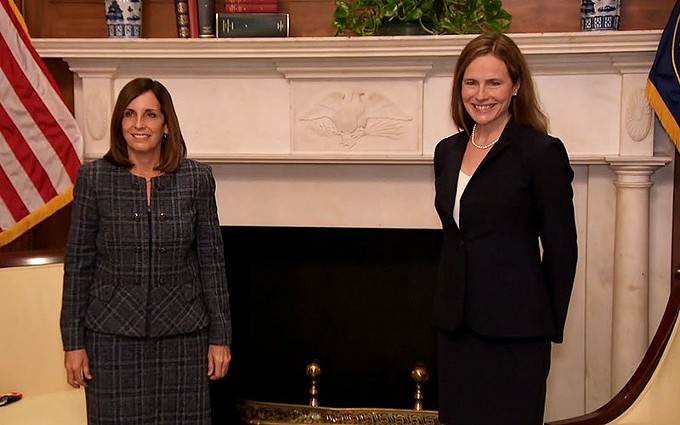 Photo courtesy CNN
Arizona Republican Sen. Martha McSally, left, was full of praise for Supreme Court nominee Amy Coney Barrett in a meeting Wednesday in the Capitol, calling Barrett a "gift to America." A Senate committee is scheduled to vote on Barrett's nomination Thursday and the full Senate could confirm her next week, just six weeks after the death of Justice Ruth Bader Ginsburg.

The meeting, one of a series between senators and Barrett, came on the eve of a Senate Judiciary Committee vote on the nomination, which is expected to be before the full Senate for a final vote as early as Monday.

“I am so inspired to meet you,” McSally said to Barrett. “Really looking forward to voting to put you on the Supreme Court.”

Democrats do not appear to have the votes to block the confirmation, but continued to criticize the rushed process, which could put Barrett on the court less than six weeks after the death of Justice Ruth Bader Ginsburg and just days before Election Day.

If confirmed, Barrett would cement a 6-3 conservative majority on the court that Sen. Patrick Leahy, D-Vt., said would “swing the balance of the court for a generation.”

“Democrats need to take steps to protect our democracy,” said Leahy, during a call with Democratic Sens. Dick Durbin of Illinois and Amy Klobuchar of Minnesota. All three are members of the Judiciary Committee.

Durbin and other Democrats on the committee have said they will not participate in Thursday’s committee vote on Barrett’s nomination, which was announced by President Donald Trump on Sept. 26, just eight days after Ginsburg’s death.

Barrett’s confirmation would also put three Trump-appointed justices on the court before the election, which some believe may ultimately be decided in the courts.

McSally joined other Republicans in September calling for a quick replacement for Ginsburg – despite Democratic demands that the nomination be delayed until after the election, as Republicans did for most of 2016 with then-President Barack Obama’s final court nomination.

In a Tuesday op-ed in the Arizona Republic, McSally explained her intention to vote for Barrett when her nomination comes to the floor, calling her “extremely capable and more than qualified” for the Supreme Court.

“You are a gift to America,” McSally during her meeting with Barrett.

Thursday’s vote comes just a week after the Judiciary Committee wrapped up four days of hearings on Barrett, hearings in which Democrats said the nominee dodged their questions on issues from voting rights to abortion to health care. The Supreme Court is scheduled to hear a challenge to the Affordable Care Act on Nov. 10, one week after the election.

“She wouldn’t even acknowledge, in my questions to her, that voter discrimination exists,” Leahy said of the frustration Judiciary Committee Democrats experienced during the hearings. “She wouldn’t acknowledge minority communities face more barriers to voting than she does or I do.”

“When I asked the nominee about her views on voter intimidation, which it wasn’t a court case, it was actually a statue that’s on the books, and she would not state that voter intimidation was illegal during her testimony,” Klobuchar said. “And yet she may be the swing vote in determining voting rights cases before the court.”

She pointed to recent court cases challenging Texas’ policy of limiting ballot drop-boxes to one per county, and South Carolina’s attempt to reinstate the requirement for a witness signature on absentee ballots during the COVID-19 pandemic. Those are cases where the Supreme Court is “going to end up being the final arbiter,” Klobuchar said.

Durbin predicted that Barrett’s appointment would lead to conservative “judicial activism” by the high court.

According to a recent Morning Consult/Politico poll, 54% of people surveyed agreed that Barrett’s confirmation will make the court more conservative.

But the same poll found that 51% of voters believe the Senate should vote on Barrett, while 28% opposed a vote and 21% had no opinion. The Oct. 16-18 survey of 1,994 registered voters had a margin of error of plus or minus 2 percentage points.

Arizona’s other senator, Democrat Kyrsten Sinema, has not said how she will vote, although Democrats are expected to reject Barrett’s nomination as a bloc. But Sinema is expected to meet one-on-one with Barrett “ahead of the Senate vote,” her office said in an email Wednesday.

For her part, McSally said she is ready to vote.

“Your incredible career, your brilliance, and the role model that you are for women and girls – and men and boys – is something that I think is going to inspire so many people,” McSally said to Barrett. “Just really looking forward to seeing you serving on the bench.”