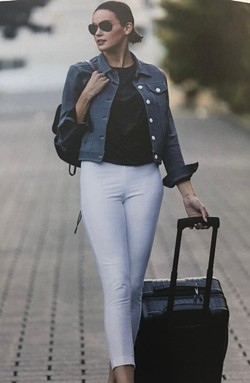 A luxury technical sportswear company is moving its operations to downtown Tucson.

WOW Studios is relocating from Seattle to establish its new headquarters at 1 E. Toole Ave., the sportswear business announced in a press release Oct. 19.

The company says their relocation will have an economic impact of $252 million over the next 10 years and create 50 jobs in engineering, marketing, design and sales.

The new WOW Studios location is scheduled to open in January 2021 in Tucson’s former SinfoniaRx building, which will now house offices, design studios and retail space for the apparel company.

Co-founders Joey Rodolfo and Stacy Bennett have years of experience in the fashion industry. Rodolfo has worked with top menswear brands like Bench Co. Ltd, Cutter & Buck and Callaway Apparel Worldwide, and even is credited with elevating the Tommy Bahama brand. Bennett is a digital marketing executive who’s built multi-million dollar programs at places such as Amazon, Nordstrom and Clarisonic, according to the press release.

"My vision is to establish Tucson as the next hub of innovative design not just in fashion, but in health/wellness and wearable tech. Tucson is business-friendly and offers incredible partnership opportunities,” Rodolfo said in the news release. “I want to see how we can build a new industry in Tucson, attract suppliers and create the next generation of health and wellness products that make lives better. The environment is important to us—we believe in slow fashion with ethical production."

The apparel company is most known for their “Buki” collection, an assortment of “luxury technical clothing and wardrobe essentials, crafted for comfort with state-of-the-art Japanese fiber and sustainably-sourced collagen fabric,” according to the press release.

“Arizona continues to attract innovative companies that are advancing new technologies and groundbreaking ideas,” Gov. Doug Ducey said in the release. “Thank you to WOW Studios for choosing to relocate their headquarters to Tucson and creating more new jobs in Southern Arizona.”

According to WOW Studios, Fletcher McCusker, chair of Rio Nuevo’s downtown redevelopment district, said "Downtown Tucson has to continue to evolve and this is a great step,” while Tucson Mayor Regina Romero called the development’s downtown location “the perfect place for developing emerging technologies."

“This is an exciting economic development opportunity at the ground floor,” Pima County Administrator Chuck Huckelberry said in the release. "We thank WOW Studios for their confidence and investment in Tucson."