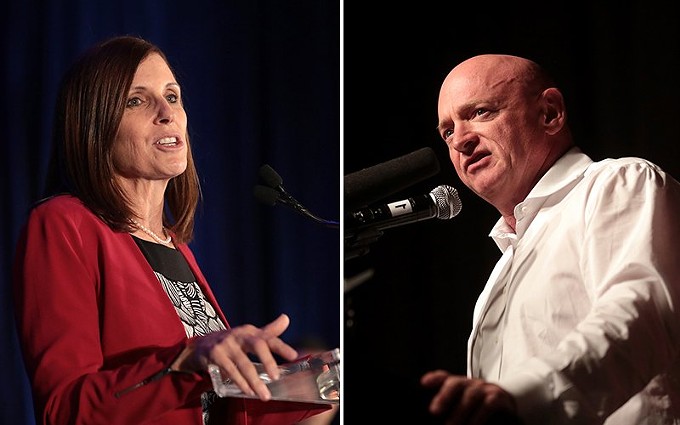 Photos by Gage Skidmore, Creative Commons
Sen. Martha McSally, R-Arizona, and Democratic challenger, Mark Kelly, had raised more than $133.7 million for the race as of Sept. 30, according to their latest campaign filings, making it the costliest race in state history.


WASHINGTON – Arizona’s Senate race is now the state’s most expensive campaign, with the latest Federal Election Commission filings showing the two candidates have pulled in a staggering $133.7 million so far.

McSally reported having $12.1 million on hand for the remaining weeks of the campaign to Kelly’s $18.8 million.

“So when you look at it historically, it appears that it will go down as the most expensive race in Arizona history,” Rose said. “This Senate race is going to dwarf previous races. And that’s just, that’s insane to think that a candidate can raise the amount of money that these candidates are raising.”

But it is not even the most expensive Senate race in the country, according to FEC records, which showed the Arizona race trailed South Carolina, which had raised a total of $146.2 million, and Kentucky, which had brought in $137.6 million.

Rose said the high level of funding is another indicator of how much of a battleground state Arizona, typically a reliably red state, has become with Republican control of the Senate at stake.

“I think most people are starting to be convinced that Arizona is going to move into the ‘D’ column instead of the ‘R’ column for the first time in years,” Rose said. “That’s why the amount of money coming into the state is what it is.”

An analysis of the campaign reports by Opensecrets.org, a nonpartisan campaign watchdog organization. reported that 70.9% of McSally’s campaign funds came from out-of-state donors compared to 79.4% for Kelly.

Officials with McSally’s campaign did not immediately respond to requests for comment Monday. But a spokesman for Kelly’s campaign said the amount raised is evidence of the support for the Democrat.

“This campaign has been fueled by grassroots supporters chipping in what they can and volunteering their time because they’re ready for a senator who will work with Republicans and Democrats to get things done for Arizona,” said Jacob Peters, the Kelly communications director.

A RealClear Politics roundup of polls on Monday gave Kelly a 7.9 percentage point lead over McSally. With only two weeks until Election Day, Rose says the money is an indication of “the import of this race in particular.”

“You don’t see this amount of money flowing into Oklahoma or California, because those races are set,” Rose said. “And I think a year ago people thought that this race was going to be close and that it was going to be determinative for the U.S. Senate.”

Despite the high profile of the race, it has drawn little in terms of donations from political action committees relative to overall fundraising. Opensecrets.org’s analysis said McSally received $2.6 million from PACs, while Kelly took in only $644,555, according to their FEC reports. By contrast, the two have both received a significant amount of money from retirees in Arizona, the analysis said.

CNN reported last week that the McSally-Kelly race was already one of the most expensive Senate races ever. The two candidates have already raised three times as much $44.5 million that was just two years ago, when McSally faced off against Democratic Sen. Kyrsten Sinema to fill the seat vacated by Republican Sen. Jeff Flake.

Shortly after she lost that race, McSally was appointed by Gov. Doug Ducey to replace Republican Sen. John McCain, who died in 2018. This year’s race is a special election to fill out the remainder of McCain’s term, with this year’s victor up for re-election in 2022.

Rose said the fact that the seat will be up for grabs again in two years makes the amount of money raised this year even more impressive. But it also serves a purpose, he said, by sending a message to potential challengers down the road.

“You want to run up the score and send a message of, ‘Don’t mess with me in two years,'” he said.

But money is sending a message this year, too, he said.

“You know, money wins in politics. Not always, but usually,” Rose said. “So Mark Kelly has the money advantage, both directly and indirectly. It’s certainly positioned him for a victory here."