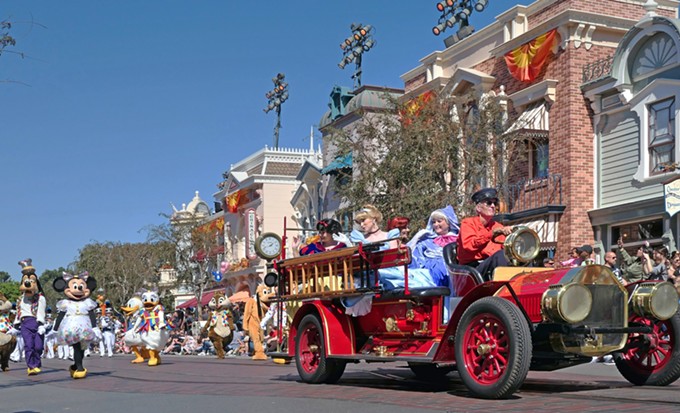 Photo by Bernard Spragg, Creative Commons
Before the COVID-19 pandemic, Main Street in Disneyland featured many daily parades. This could change whenever Disneyland reopens under health guidelines from the state.

Newsom last week pointed to the severity of the COVID-19 pandemic and told reporters the state “is in no hurry” to reopen theme parks. California has the second-highest weekly rate of new infections in the country after Texas, according to the CDC, and Newsom chooses to err on the side of caution. Disneyland has been closed since March 14.

“We are going to be led by a health-first framework,” he said in an Oct. 7 news conference. “We’re going to be stubborn about it and that’s our commitment.”

Theme parks across the country are already welcoming people back, including Castles N’ Coasters in Phoenix and Walt Disney World in Orlando, Florida, the only other Disney park in the U.S. For Disney fans in Arizona, the proximity of Disneyland means many are growing impatient to see Mickey Mouse and plummet down Splash Mountain.

Disney fanatic Jack Enssle of Peoria, who lived in Southern California before his move to Arizona, is confused by the ongoing closure, given that Disney World and the Downtown Disney shopping center in Anaheim are open.

“They have Downtown Disney open and are constantly checking on the status of people in limited capacity,” he said. “Disney World even hosted the NBA playoffs, and that was the only sports league that didn’t get coronavirus after their season resumed.”

Enssle is one of many fans pushing for a Disneyland reopening, based on Disney’s continuous adjustments to safety protocols. City officials, Orange County residents and Disney fans are all fighting for reopening, saying that the economy is suffering without these businesses.

“Here in Anaheim, we are 15 percent unemployment. That is higher than the Great Recession,” Anaheim Mayor Harry Sidhu said in a news conference last month. “We face a $100 million deficit felt across the city, it grows every week that our theme parks and convention centers are closed.”

Disney did not respond to requests for comment this week, but officials said the company takes all necessary precautions in their continuously updated safety measures, according to a statement by Dr. Pamela Hymel, chief medical officer of Disney parks.

“All of our other theme parks both in the United States and around the world have been allowed to open on the strength of our proven ability to operate with responsible health and safety protocols,” Hymel said.


This week, the California Health and Human Services Agency sent health officials to Disney World and other parks in Florida, spokeswoman Kate Folmar said Monday, according to the Orange County Register.

“We sent health officials to open and operate theme parks out of state last week, independently of operators, to assess the health safeguards in practice,” Folmar said. “These visits will help inform our pending theme park guidance.”

Without a timetable, though, Orange County’s economy will continue to take the hit.

Disneyland generated more than $500 million in taxes and contributed $8.5 billion to the economy in 2018, according to a Disney-led study at California State University Fullerton. Disney also supplies 80,000 jobs in Southern California, although 28,000 employees across all Disney parks were laid off Sep. 29 because of Disneyland’s closure.

Disney CEO Bob Iger resigned from Newsom’s task force he gathered in April to “inject an element of business acumen and gravitas into the state’s pandemic recovery efforts,” just two days after the layoffs, the LA Times reported.

The Service Trades Council Union, comprised of six affiliate unions representing about 43,000 Disney cast members across all Disney parks, has offered aid to affected employees. Despite job reductions, 21,627 full-time cast members and 3,877 part-time have been recalled to their jobs during Disney’s phased reopening according to the workers union in Orlando, Local 362. More than 7,700 full-time employees and 9,100 part-time cast members are on furlough status.

However, Workers United Local 50, which represents Disneyland workers, were unable to prevent the firing of full-time employees. They note that under Section 20 of their contract with Disney, employees could return to work at the same position.

“Section 20 also addresses the provision of ‘Recall Rights,’” the union said in a Facebook post. “Where if a Cast Member is recalled within 12 months of the December 31st separation date, the Cast Member will be able to return with their current seniority.”

However, California fans of the Magic Kingdom still worry about Disney workers.

“That’s really sad to see, especially because of how much those workers love Disney,” Orange County resident J.J. Rosado said. “We think we miss Disneyland but imagine them. They spent months missing it, then were told they’re out of a job.”

The economic repercussions also are striking neighboring cities, including Buena Park, the home of Knott’s Berry Farm theme park and Medieval Times Dinner and Tournament, which is not a theme park but remains closed.

“Knotts Berry Farm, Medieval Times and dinner adventure Pirates (Dinner Adventure) are some of our big venues we have in Buena Park,” Mayor Fred Smith said in a news conference last month. “So this is really a disaster to the people of Buena Park and all our surrounding cities.”

The Medieval Times in Scottsdale reopened Aug. 6 with COVID-19 protocols implemented but did not apply these protocols to the Buena Park castle. Six Flags Magic Mountain in Santa Clarita, California, also has called on Newsom to speed reopening with “achievable” guidelines, the Los Angeles Daily News reported.

Orange County residents won’t be able to visit the Medieval Times castle or Six Flags until the county is in Tier 4 of California’s Blueprint for a Safer Economy, requiring fewer than one new case per day per 100,000 people. However, Orange County now is in the “widespread” Tier 2, which is defined as four to seven new daily cases per 100,000.

Mayor Sidhu stressed that Disneyland and Orange County officials understand the dangers of the pandemic, they simply want guidelines so that reopening can be done in the safest way possible.

“Disneyland is the only (Disney) park in the world that isn’t open yet,” Rosado said. “I think they showed they can reopen safely under whatever guidelines there are, so just give them guidelines.”

Until these are released, theme parks will continue to suffer. Not only did Disney let go of 28,000 employees, but they were also forced to permanently shut down two of its live shows, much to the dismay of fans.

“It just kind of sucks having been from California and knowing what it’s like to go so frequently, now I have to plan and make a trip out of it,” Enssle said. “And at this point, we don’t even know what rides will still be open. I don’t know if I’ll ever go on some of my favorite rides again.”

The Orange County advocacy group Reopen OC Now is filled with city officials who believe the parks should have received guidelines by now. The formation of this group led to last month’s statements by Sidhu and Smith.

Reopen OC Now posted a letter online for supporters to sign and produced a commercial, both directed at Newsom.

That’s not enough for Disneyland fans, who are taking to social media to advocate and argue for their beloved theme park.


But for now, all Disney fans can do is wait.