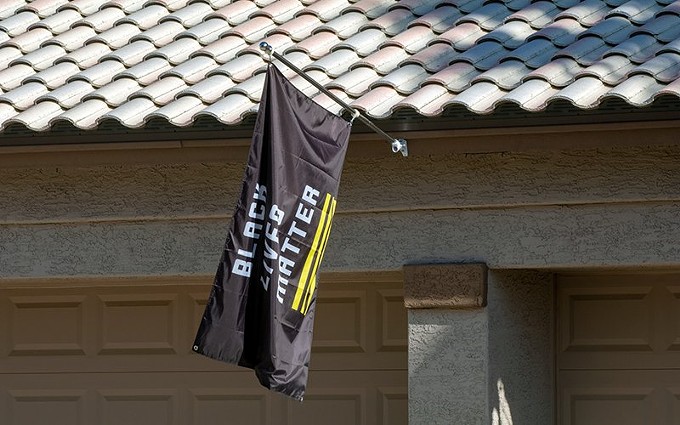 Photo by Luke Simmons, Cronkite News
Melanie Boyle of north Glendale received a violation notice from her homeowners association that said her Black Lives Matter sign had to be taken down. She has since replaced the sign with a flag, hoping it won’t violate HOA rules.


GLENDALE – Melanie Boyle hung a hand-painted Black Lives Matter sign on her home in July to show her support for the movement and its demands for justice.

“I wanted to do this little act of putting up a sign and open more conversation about it in my area,” she said.

Conversations with her neighbors went well, with some also expressing support for BLM and a supporter of President Donald Trump who acknowledged the rights of Boyle’s family to display their opinions.

Then, in September, she got a different response. Her homeowner’s association, or HOA, sent her a violation notice.

HOAs have the power to dictate which signs and flags can be displayed in homeowners’ yards and on their houses, a power backed up by federal, state and local laws.

Boyle wasn’t having it. One street down from hers, the 36-year-old physician said, are six houses displaying Trump 2020 flags. If those are allowed, she thought, so should her cardboard sign.

Staples of election season, political signs and banners clutter the sides of busy streets and pop up in yards across metro Phoenix. Throughout the year, some neighbors use flags and signs to show their allegiance to sports team logos or to show “Congrats! You Graduated!” signs.

A Phoenix attorney with expertise in HOAs said questions that arise in Boyle’s BLM sign case include First Amendment rights to use signs to speak your mind versus HOAs’ legal standing to regulate signs, and whether HOA policies are inconsistently applied.

A trail of emails shows Boyle’s attempts at clarification.

On Aug. 18, Boyle’s HOA in north Glendale, which is managed by Spectrum Association Management in Chandler, sent a mass email to residents with updates on the policy pertaining to home security system signs, real estate signs and political signs.

The company cited Glendale city code concerning political signs, set out the maximum number and size of signs allowed, and said they could not be displayed earlier than 71 days before an election. Noncompliant signs had to be removed within three days, it said.

That meant the earliest residents could display political signs was Aug. 24. Five days before that, Boyle sent an email asking whether the prohibitions included her family’s BLM sign.

“Black Lives Matters signs are not allowed, along with political flags,” Spectrum replied.

Violation notices start with a warning, then a $50 fine that increases based on the number of violations. Boyle removed her sign.

But she suspected Spectrum wasn’t applying the rules consistently. She emailed Spectrum again, this time about the six Trump 2020 flags on the next street. The company replied that flag restrictions would not be enforced if the flags are in good condition and removed after the Nov. 3 election.

Boyle responded that a Black Lives Matter flag should then be acceptable, and she put her sign back up on Sept. 4, intending to replace it with a BLM flag once it arrived in the mail.

Boyle received an official violation notice in the mail, dated Sept. 8, declaring she was in violation of the HOA’s sign policy.

Spectrum referred Cronkite News to its attorney, Beth Mulcahy, who did not return requests for comment by email and voicemail.

Opal Tometi, one of three women who co-founded Black Lives Matter in 2013, has written on her website that BLM is a human rights issue, a view that’s widely supported in some circles but controversial in others.

Jonathan Dessaules, an HOA attorney at Dessaules Law Group in Phoenix, is not representing Boyle but offered a legal perspective on her BLM sign.

It’s reasonable to argue that a BLM sign should be considered a political sign protected under Arizona law, he said, adding, “No one is going to believe that a Black Lives Matter sign is apolitical.”

Dessaules emphasized the importance of an HOA’s rules, known as declarations of covenants, conditions, and restrictions, or CC&Rs. Homeowners agree to abide by CC&Rs, which often prohibit any modification to the outside of a home, including a sign or flag, without approval.

According to the violation notice mailed to Boyle, her neighborhood’s CC&R says “No signs or advertisements of any kind may be placed, allowed or maintained without prior written approval and authorization of the Board.”

However, Dessaules said, if Spectrum is not regulating other kinds of signs and flags, such as congratulatory signs and those for sports teams, Boyle would have a solid argument that she is being discriminated against.

One key question needs to be answered, he said: “Is the association taking a position on speech that suggests that their actions are designed to prohibit only certain political speech, as opposed to all speech?”

Dessaules also questions Spectrum’s reference to the city code that defines political signs as those supporting a candidate or ballot measure.

“Enforcing city code is not the role of HOAs,” Dessaules said.

The power of signs, flags to connect people

Boyle said she needed to establish what she and her family stand for as they settled into homeownership.

“Given all the changes in our country right now and how the civil rights movement has reawakened itself, I felt it was the right time to get involved,” she said, and displaying the sign was one way to interact with neighbors.

Boyle said her family was in the front yard when an elderly couple walked by and said they supported BLM, too.

A neighbor who supports Trump said he respected Boyle’s right to publicly express her support for BLM.

Another neighbor discussed with her how he grew up in Mesa as a minority and understands what it is like to fight for equality.

Only some responses were negative.

On Sept. 5, a person driving by their house yelled at Boyle’s husband to take down the sign and shouted that all lives matter.

On Sept. 23, she replaced the sign with a BLM flag, hanging from her home, above the driveway.

She has not received any additional violation notices.