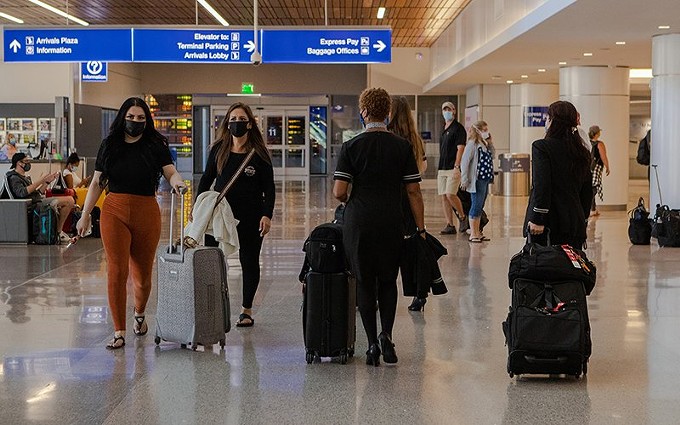 Photo by Allie Barton/Cronkite News
A number of U.S. airlines furloughed thousands of workers Thursday, one day after a federal aid package to help carriers through the coronavirus pandemic expired. Those included hundreds of furloughs at Phoenix Sky Harbor International Airport.


WASHINGTON – To American Airlines flight attendant Robyn Walters, her co-workers are like family. That made it all the more difficult last weekend when she had to say goodbye to colleagues who were working their last flights before being furloughed.

“It’s been absolutely heartbreaking,” Walters said. “They’re being separated from a career they’ve grown to love.”

Union officials said nearly 200 of Walters’ fellow Phoenix-based flight attendants were among 19,000 American Airlines employees furloughed or laid off nationwide Thursday, one day after the end of a federal stimulus package that had been preserving airline jobs for the past six months.

The total furlough count for Phoenix, a hub for American, stands at about 300, said company spokesperson Matt Miller. That number is “still a bit fluid,” he cautioned, primarily because it does not account for furloughed ground workers at other sites who can displace employees in Phoenix who have less seniority. That process, called “bump and roll,” will conclude by the end of the month, Miller said.

American was not the only U.S. carrier furloughing workers Thursday, but the number affected in Arizona from other airlines was not immediately available.

The furloughs at American were not as high as they would have been “largely because we were able to mitigate some furloughs through voluntary early-out (retirement) and leave programs put into place in recent weeks,” Miller said. He could not provide numbers for how many employees in Phoenix took such options, but said the number company-wide was about 23,500.

“It’s unbelievable to me how much Phoenix has been affected,” he said.

There’s a chance the furloughs will be short-lived. American CEO Doug Parker told U.S. Treasury Secretary Steve Mnuchin the airline would reverse the furlough process and recall employees if Congress and the White House agree to a new aid deal within the next few days, according to a letter Parker sent to employees Wednesday.

In a similar letter to United Airlines employees, CEO Scott Kirby said, “We implore our elected leaders to reach a compromise, get a deal done now, and save jobs.”

The original stimulus, the Payroll Support Program (PSP), was part of the $2 trillion Coronavirus Aid, Relief and Economic Security (CARES) Act passed in March. The PSP allocated $25 billion to passenger airlines to meet payrolls and prohibited carriers who took the money from conducting any involuntary layoffs or furloughs through Sept. 30.

Negotiations on a new federal aid package that would include an extension of the PSP are ongoing between Mnuchin and House Speaker Nancy Pelosi, according to Parker’s letter, which also said there are efforts to produce a standalone PSP if the larger bill fails. The airlines and unions are asking for an extension through March.

“Unfortunately there are no guarantees that any of those efforts will come to fruition,” Parker said.

If they don’t, the process of bringing employees back once the furlough is over becomes more complicated, Hartshorn said.

“The thing about layoffs with FAA-trained employees, such as flight attendants and pilots, is once you lay them off for a period of time, there are strict regulations to bring them back,” he said.

“We don’t just get called on a Tuesday and say show up on a Friday,” Hartshorn said. “We have to go through mandated training and everything.”

If the furloughs go on long enough, those workers will not only lose income but would be without health insurance as well, Hartshorn said. The union’s contract says furloughed employees can keep their health insurance from two weeks to four months, depending on how long they have been with the company, he said.

“Eventually they will all lose access to their health care in the middle of a pandemic,” Hartshorn said. “That’s perhaps one of the most devastating realities of this whole thing.”

Walters, who also serves as a regional representative for the flight attendants’ union, said that makes a furlough “very scary for anyone who is currently fighting an illness, anyone who has a family member, a dependent, a spouse, a partner or a child that has any kind of health condition.”

Some of her colleagues will not have to worry about that, for now at least, because of the compassion of their co-workers.

“I know a lot of flight attendants who have taken leave in hopes of saving a job for someone else,” Walters said. “I think that that is extremely admirable, and I am very proud to work alongside those people.

“This is a very, very caring workgroup, who thinks about each other and takes care of each other,” she said.