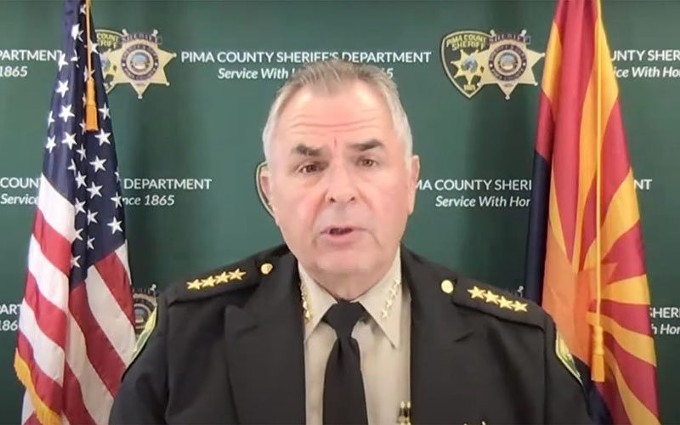 Photo courtesy House Oversight and Reform Committee
Pima County Sheriff Mark Napier said there are “bad actors” in any profession and that racism still exists in the U.S. But he told a House panel it was wrong to suggest that racism or white supremacy are somehow systemic in police forces.

WASHINGTON – Pima County Sheriff Mark Napier pushed back against claims that white supremacists have infiltrated law enforcement agencies, telling a House committee Tuesday that he has “simply not been exposed” to any evidence of that.

Napier said that while “bad actors” may slip through, police share community outrage at the actions of what he insisted are “a very, very few members of law enforcement.” But the perpetuation of the narrative of racist police agencies, meanwhile, has made it difficult to attract the minority officers who could diversify the force, Napier said.

His comments came during the latest in a series of House Oversight Committee hearings titled “Confronting Violent White Supremacy” – a problem Democrats on the committee said can be seen in the spate of police violence against Black and Latino victims.

“The bloody trail of violent white supremacy is now splattered across America,” said Rep. Jamie Raskin, D-Md., chairman of the Subcommittee on Civil Rights and Civil Liberties. Raskin went on to say that the “virus of white supremacy is spreading.”

But the few Republicans who attended the subcommittee hearing cautioned against generalizations that create “broad and false narratives about the police.”

“When we, the institution of Congress, make blanket statements using viral videos to define a class of human beings standing on that wall for us every day, I’m troubled by that,” said Rep. Chip Roy, R-Texas.

Democrats pointed repeatedly to a 2006 FBI report that warned of the threat of white supremacists infiltrating police departments – a report the agency has since disavowed as “an irrelevant and outdated document.” Raskin said the FBI was invited to send a representative to the hearing, but declined to do so.

But most of the witnesses at the hearing said the threat is very real. Frank Meeink, who identifies himself as a former white supremacist, recalled being encouraged to join the police force “as a means to cause harm to people of color,” with group leaders sharing ways to get around the screening process.

“The fact that many of these neo-Nazis became cops means there is something not right with the screening process in law enforcement, and I believe it is possible to fix,” Meeink said.

Democrats argued that police can still perpetuate racist behavior even if they do not identify as members of racist groups, saying the issue is deep-rooted within the system.

“We have known for generations that it’s not a question of whether this problem is an issue,” said Rep. Alexandria Ocasio-Cortez, D-N.Y. “It’s a matter of how we have allowed it to sustain for so long.”

Heather Taylor, president of Ethical Society of Police in St. Louis, said this racial divide is not allowing police to do their job properly and that something needs to be done to address the internal problems within law enforcement.

Napier said his officers go through a “rigorous hiring and training process,” that includes sensitivity and racial-bias training, but Taylor said more needs to be done.

“I believe more extensive background checks are necessary when hiring,” Taylor said. “Anyone saying you can train away racism, they’re wrong. You need to weed it out, you need to fire them.”

Rep. James Comer, R-Ky., said one solution is to increase minority representation within law enforcement, especially within districts where the majority of residents are people of color. He called on Democrats to ease up on its dialogue.

Napier echoed Comer’s sentiment, saying he has struggled to hire new officers in the face of the “current, national rhetoric.”

But Rep. Rashida Tlaib, D-Mich., pointed to an incident in November in Napier’s department, when a Pima County officer was videotaped pinning a Black quadruple amputee to the ground, according to news reports.

“The system is broken and I know you do not want to face the fact,” said Tlaib, who added that the office in that case was not charged.

But Napier said he immediately put that officer on leave and turned the case over to the county attorney, who declined to bring charges. And he doubled down on his defense of his profession.

“I have simply not been exposed to any evidence that would lead me to reasonably believe that systemic racism and infiltration of white supremacy into the profession – which I’ve dedicated nearly four decades of my life to – is present in modern-day law enforcement,” Napier said.