Democrats Bring Attention to Healthcare Ahead of Tonight's Debate 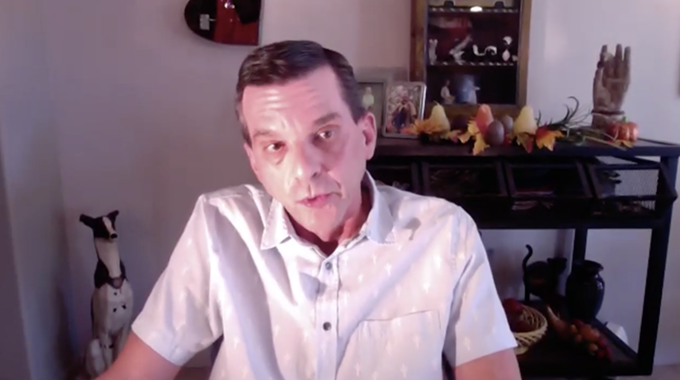 Jeff Jeans once described himself as a “hardcore conservative Republican.”

But after he moved to Arizona and lost his job, he lost the health insurance that came with it. A year later, Jeans lost his voice and was diagnosed with stage 4 throat cancer.

Without the ability to pay for medical expenses on his own, Jeans received health care coverage through the Affordable Care Act, the Obama-era health care reform law enacted in March 2010.

After receiving coverage for medical expenses he couldn’t afford on his own, Jeans is now a staunch advocate for the law he once adamantly opposed.

A day before tonight’s first debate between President Donald Trump and Democratic challenger Joe Biden, Jeans shared his story at a virtual press conference hosted by Arizona Democrats discussing the Affordable Care Act and Trump’s opposition to the health care law. He shared the same testimony as a guest speaker at the Democratic National Convention in August.

“I made a pact with God when I was in my hospital bed that if I lived through this, I was going to share my story,” Jeans said. “Thanks to the Affordable Care Act, I’m alive today.”

Jeans shared the story resulting in his political conversion, while state Rep. Kelli Butler of District 28 and Amanda Aguirre, president and CEO of the Regional Center for Border Health, shared their opinions on the importance of voting to secure the safety of the Affordable Care Act as the president tries to dismantle it.

Butler expressed the significance of this defiance to the healthcare law during a pandemic that has dealt a huge blow to the U.S. economy felt by many who have lost employment, and as a result, access to health insurance.

“At a time when far too many Americans have already lost employer-sponsored coverage because of this pandemic, Trump’s efforts to dismantle the ACA are more dangerous than ever,” Butler said. “Make no mistake, on Nov. 3, healthcare is on the ballot. And on November 10, healthcare is on the docket.”

Aguirre agrees, especially when considering the rural populations she works with.

“We could go to a place where people will be continuously suffering from COVID-19 issues after they eliminate the Affordable Care Act,” Aguirre said. “That would be unjustifiable. For me, it would be like putting people on a death sentence.”

Considering Trump’s opposition to the ACA, Butler predicts he’ll echo claims to replace the law with a more effective health care system at the first presidential debate on Sept. 29.

“When Trump takes the debate stage tomorrow, he’ll try to spin his attacks on the Affordable Care Act, and I’m sure he’ll, once again, make false claims about some mysterious replacement plan,” Butler said. “But the Trump and Republican healthcare plan has been crystal clear for four years now: Their plan is to overturn the ACA and tear away healthcare coverage from hardworking families.”

With the recent death of former Supreme Court Justice Ruth Bader Ginsburg, Butler worries Trump’s replacement nominee will solidify his plans to dismantle the ACA by casting the deciding vote against it.

“If Trump and the Senate Republicans succeed in jamming for the Supreme Court appointment, that brand new Supreme Court Justice will likely cast the deciding vote to overturn the entire ACA,” Butler said. “That means nearly 363,000 Arizonans could lose their healthcare coverage in the middle of this pandemic.”

While the three speakers were adamant about their opposition to Trump, they were just as adamant about voting for former Vice President Joe Biden this November.

When Jeans spoke at the virtual 2020 Democratic Convention, he said the former vice president told him and two other cancer survivors that they would never have to go without healthcare.

“There’s a stark contrast between our choices this election. Donald Trump continues to attempt to repeal the ACA, strip away coverage from millions of Americans and eliminate preexisting conditions protections in the middle of a pandemic,” Jeans said.

Butler agrees that it’s imperative to vote in the upcoming election in order to protect the ACA.

“The stakes couldn’t be higher this fall,” she said. “We have just 36 days left until the most important elections of our lifetime, we must make every single one of those days count if we want to protect our care.”