What recent polls can tell us about the Arizona Senate race 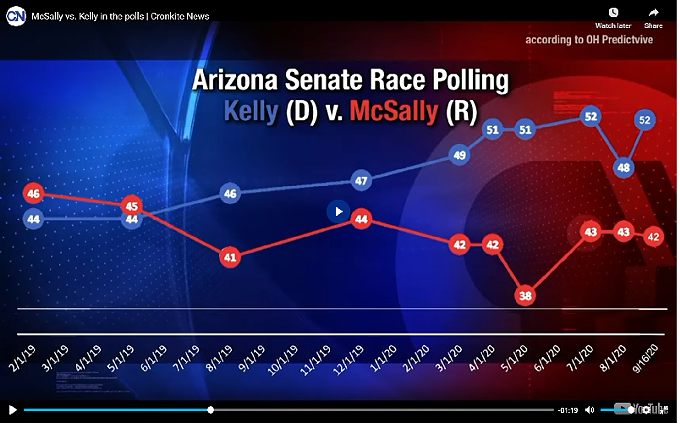 PHOENIX – Recent polling data in the Arizona Senate race suggests Democrat Mark Kelly has a large lead over incumbent Republican Sen. Martha McSally. However, the gap might not be as big as some polls show.

A recent poll from Fox News has Kelly 17 points up in the Arizona Senate race. The poll, conducted at the end of August, surveyed 772 likely voters and found a 56-39 split in favor of Kelly.

However, data from OH Predictive Insights, a Phoenix-based polling firm, suggests the gap is much smaller. Data analyst Jacob Joss said that, while Kelly is undoubtedly ahead, the race is actually closer to single digits.

OH Predictive Insight’s latest poll shows Kelly with a 10-point margin. Its data did show a wider gap in the summer. However, the race narrowed to as small as 5 percentage points in August.

“It looks like Kelly is the clear favorite right now,” Joss said. “But obviously the numbers are close enough that either party could come out on top.”

The election might be decided by voter turnout. According to data compiled by Arizona Highground, a public affairs consulting firm, Arizona will likely surpass 3 million voters for the first time in the state’s history.

The firm’s data also showed record turnout in the 2020 primary elections. This included a 30% increase from the 2018 primary among registered Democrats, compared with just a 7 percent increase among registered Republicans.

Arizona Highground President Chuck Coughlin said younger voters that often lean to the left might be driving the shift in the Arizona electorate.

“Republicans always turn out,” Coughlin said. “The sun rises in the morning. Republicans go vote. It’s who shows up around them in the cycle. And we’ve seen higher participation rates amongst nontraditional cohorts of the electorate.”

Just four years ago, Republican Sen. John McCain won re-election to this seat by nearly 13 points over Democratic challenger Ann Kirkpatrick. After McCain died in 2018, McSally was appointed to fill his seat. The election this November is to fill the final two years of McCain’s term.

If Kelly wins, it would mark the first time in nearly 70 years that Arizona had two Democratic senators in office concurrently. And because the election is filling a vacant seat, Kelly could be sworn in as early as Nov. 30, when Arizona election results are certified, according to Arizona law.

This could allow the winner of the race to cast a crucial vote on a potential Supreme Court nomination by President Donald Trump. It could also be a deciding factor in who controls the Senate for the next two years.

“Whoever wins the Senate seat here, whether that be Mark Kelly or Martha McSally, is going to play a key role in determining who gets 51 seats in the Senate,” Joss said.

The Beatles, Bruce Dern and Jessica Chastain Headline This Week's Streaming Films at The Loft Cinema