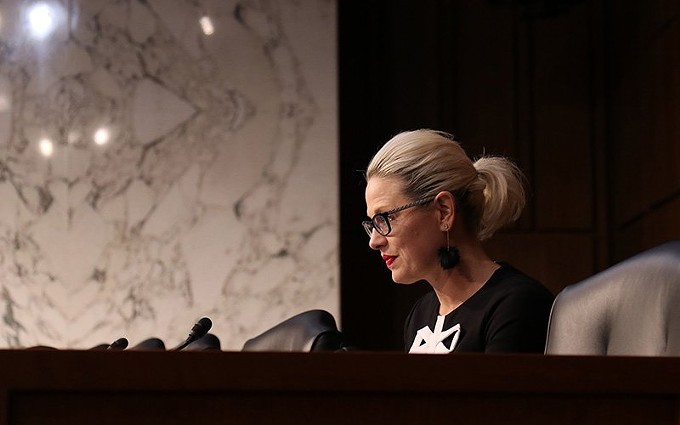 File photo by Keerthi Vedantam/Cronkite News
Sen. Kyrsten Sinema, D-Arizona, in a file photo from May 2019, said in a Senate Homeland Security Committee hearing that DHS has put the cart before the horse by rushing into border wall construction without sufficient review first.

The questions came during a Senate Homeland Security Committee confirmation hearing on the nomination of acting Secretary Chad Wolf – who has been serving in an acting capacity for close to a year.

“Construction began before mitigation plans were complete. I will note that my office received reports of dynamite blasting in Guadalupe Canyon yesterday related to wall construction,” said Sinema, a Democrat. “That will have a permanent impact on our land.”

But Wolf said his agency’s primary concern is national security, not environmental damage, to respond to the national emergency declared by the president.

“The president did issue a national emergency to build a new border wall system, so we’re appropriate. We are waiving regulations to make sure that that work does not slow down and is not delayed,” Wolf told Sinema.

The exchange came during a wide-ranging hearing that touched on everything from the actions of DHS officers during protests this summer in Portland, Oregon, to threats posed by states like Russia, China and Iran.

Republican lawmakers on the committee generally lauded the direction of the agency under Wolf. Sen. Ted Cruz, R-Texas, spent most of his time praising Wolf and defending his choices as acting secretary while Sen. Ron Johnson, R-Wisc. and the committee chairman, ceded his time to let Wolf address scandals affecting DHS.

But most Democrats on the committee grilled Wolf on his decision to send DHS officers to cities like Portland and his focus on left-wing anarchists over white supremacists. They also questioned the legitimacy of decisions made by a secretary who has served in an acting capacity for so long.

The border wall was just one of the immigration issues that was touched on. Lawmakers also asked about the care of migrants in Immigration and Customs Enforcement custody and reports that trafficking victims have been returned to their home countries where they could face further danger.

Complaints about the wall are hardly new. After Congress refused to meet his demands for border wall funding, President Donald Trump in February 2019 declared a national emergency at the border that he said allowed him to shift funding from other departments and let DHS waive environment and other regulations as necessary.

That has led to repeated run-ins with local communities.

In February of this year, the Tohono O’Odham Nation said that “dynamiting these sacred sites and burial grounds” where the wall is going up “is the same as bulldozing Arlington National Cemetery or any other cemetery. Our history as a people is being obliterated and our ancestors’ remains are being desecrated.”

“The National Park Service has acknowledged these areas are sacred to the Nation,” the statement said. “Yet in the rush to build the wall, U.S. Department of Homeland Security (DHS) has waived cultural preservation and environmental laws.”

Earlier this month, Border Patrol agents assisted the National Park Service with the arrest of two O’odham women for “interfering with agency functions” and “violating a closure” by trying to block construction equipment at Quitobaquito Springs, an oasis near the border. Environmental groups have charged that DHS’ use of groundwater to make cement for the wall has caused the spring’s water level to fall in recent months.

Sinema criticized the agency for rushing to construct the southern border wall before environmental assessment reports could be done and provided to Congress. She also accused the department of failing to communicate with local tribal leaders whose sacred sites are imperiled by the project.

“It seems like there’s a cart before the horse situation, and I do want to note that residents of southern Arizona have expressed intense concern about this,” she said.

But Wolf insisted that DHS, Customs and Border Protection and the Army Corps of Engineers were doing their part to minimize and mitigate damage to cultural resources along the southwest border, but the main goal is to build the wall.

Wolf said the department plans to deliver an environmental assessment of its actions on the wall to Congress in October, but did not specify when.

“We’ll continue to abide by our responsibilities to make sure that we’re good stewards of the environment … but it’s been very clear that that is a national security issue and we’re going to continue to build that new border wall system,” Wolf said.