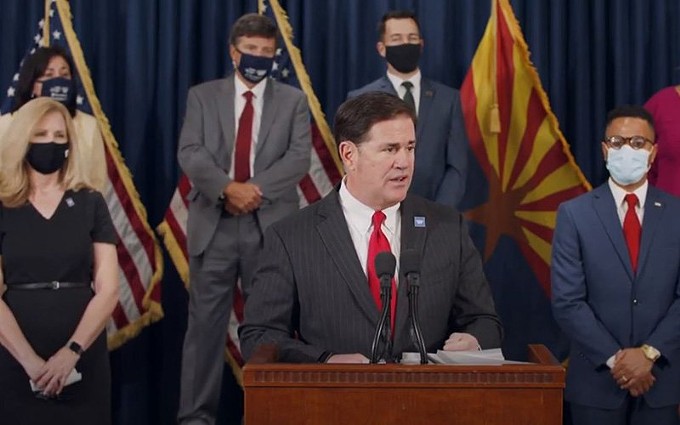 WASHINGTON – A federal judge could decide next week whether to force the Census Bureau to extend its 2020 count for another month, but state and local groups working to ensure a high response rate said they are taking no chances.

Gov. Doug Ducey, at a news conference Thursday with Census Bureau Director Steven Dillingham, urged Arizonans to “run through the tape over the next 13 days.” Dillingham added that the bureau has sent an additional 450 enumerators to Arizona to help complete the count there and is “pulling out all the stops” to complete the count by the end of the month.

“Let’s make sure that every Arizonan is counted in 2020,” Ducey said. “To everyone listening at home, if you haven’t completed the 2020 Census, don’t delay, do it today.”

But as of Wednesday, Arizona had the eighth-worst census response rate in the nation, with 87.9% of state households having responded to a count that could end in as little as two weeks.

“We are behind right now, and we need every Arizonan to talk to their friends and family to make sure everyone is counted,” said Alec Thomson, director of the Arizona Complete Count Committee.

Complications from COVID-19 earlier this year forced the Census Bureau to delay the end of enumeration – the actual counting of people – until Oct. 31. But the bureau reversed course suddenly in August and set a new end date of Sept. 30, with a goal of getting the census results to the president by Dec. 31.

Enumerators are going door to door to find people who have not responded to the 2020 Census yet, but you can still respond on your own by visiting the Census site here.

Critics sued, arguing that the shorter timeframe would result in an undercount that could affect billions in federal funding and skew federal and state representation – effects that would hit minority communities particularly hard.

A federal judge earlier this month put the plan for a Sept. 30 end date on hold until next week, when a full hearing on the complaint is scheduled.

“If the complete count is not achieved, our quality of life would be impacted,” said Elisa de la Vara, chief community officer for the Arizona Community Foundation.

Thomson said a 1% undercount could cost the state $62 million a year in federal funding, or $620 million by the next Census in 2030, possibly affecting everything from education and public works projects to congressional representation and redistricting.

“We would always take more time. The communities you will see the operational change affect are rural and tribal communities,” he said.

But a coalition of groups in the state, including Thomson’s and de la Vara’s, is working to make sure that doesn’t happen, despite the fact that Arizona’s overall response rate still lags behind the majority of states. Nationally, 93% of households had responded by Wednesday, from 85% in Alabama to 99.6% in Idaho.

The final push caps after months of work by the groups that included broad-based strategies, such as inserting census info at the state’s motor vehicle offices and coronavirus testing centers, and targeted campaigns for different demographic groups.

Thomson said the Arizona Complete Count Committee developed a “targeted and comprehensive campaign” that reaches everyone, but particularly underrepresented communities.

“We focused on the end goal of communicating with every Arizonan the importance of the 2020 census,” he said.

That included reaching out to community and faith leaders and creating an ad campaign that reached all 15 counties in the state. 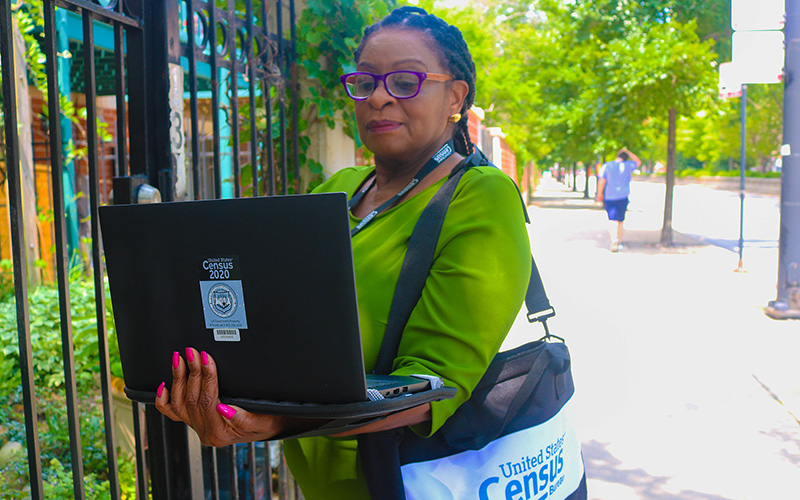 Enumeration is the last step in the census process, when Census Bureau workers go door to door to get information from people who have not replied on their own by mail, phone or internet. The bureau has shifted an additional 450 enumerators from other states to help finish up in Arizona, where just 87.9% of residents had responded by Wednesday, compared to 93% nationally. (Photo courtesy U.S. Census Bureau)

Before the Census started, he said, Phoenix’s Complete Count Committee created focus groups to better understand how to market to certain populations, like Latinos, Blacks, and American Indians.

“Rather than trying to figure it out amongst ourselves, the answers are usually in the community,” Santana said.

Those efforts have helped ease the fear of an undercount for Santana and others. But no one is relaxing.

“If we are undercounted, we will be underfunded and we are going to be underrepresented for the next ten years which is a huge concern for communities of color,” said Yolanda Medina, Census outreach coordinator for One Arizona.

Medina said her group has tried to cater to each community’s needs. COVID-19 testing sites, food banks and voter registration drive-thrus were used to market the census, urging residents to get counted. And on Sept. 8, One Arizona ran text banks, in Spanish and English, with messages sent to more than 140,000 Arizonans.

She believes there still is more outreach that needs to be done, since “a rushed Census is an inaccurate one.” Santana echoed her statement.

“We are going to keep working to the end of this to get that number up. We will not rest until we get an accurate count,” he said.