The storage shed of Putney’s Pitstop Sports Bar and Grill, located at 6090 N Oracle Rd, was set ablaze in a suspected arson fire in the early hours of Tuesday.

Owner Fernando Gomez said his security cameras show a male wearing a black hood and COVID mask pouring gasoline on the business’ storage-shed and then placing two Duralogs under the wooden fence surrounding the bar's patio. A quick flick of the wrist ignited a match and the structure went up in flames.

Gomez suspects the arson’s motive is due to their COVID mask requirement as directed by the state for reopening during the pandemic.

“With requiring people to wear masks, we’ve been having to turn away a lot of people. We always tell them we’re trying to stay open. If we don’t comply, we’ll be shut down,” Gomez said. “We even give out free masks if they don’t have one. But a lot of people start talking shit to us or our staff.”

Only the storage-shed and an exterior wall enclosing the establishment’s patio was scorched. While the official tally of damages has yet to be determined, Gomez estimates around $15,000-$20,000 in damages was caused by the blaze.

“We’ve only been open two weeks and now this shit happens,” Gomez said. “But the bar wasn’t hurt at all, thank God,” Gomez said. “The main thing that got destroyed was our tables and chairs we had pulled out of the place to follow occupancy guidelines.”

The fire started at 3:36 a.m., according to Putney’s exterior security cameras. Local firefighters were on the scene within four minutes, helping reduce the amount of damage to the bar itself. Police were called to the scene and found what they believe to be the suspect’s COVID mask which might be able to provide clues to who started the fire.

“(Police) can get DNA from that mask. If that person’s DNA is in the database, (police) are going to catch them,” Gomez said. “They did say they had a strong lead. I really hope they catch this asshole.”

Putney's will still open for business during clean-up efforts by staff and management.

Tucson Meet Yourself 2020 to Include Virtual and In-Person Events 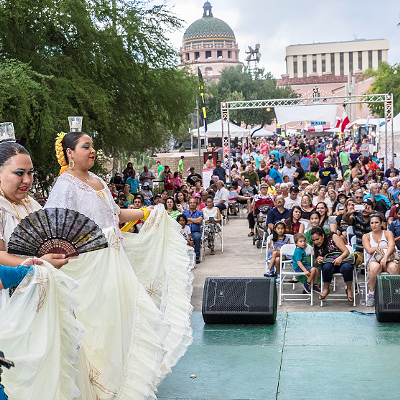