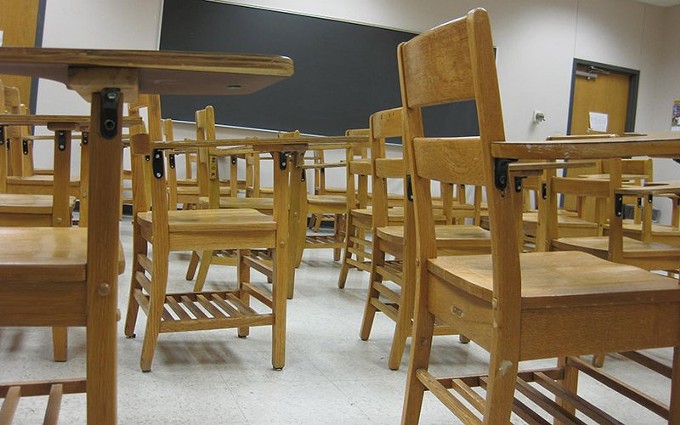 alamosbasement/Creative Commons
The Bureau of Indian Education has unveiled a school reopening plan that leans heavily toward in-person education, as soon as next week. Tribal officials say they were blindsided by the announcement, which came despite their concerns about health safety during the COVID-19 pandemic.


WASHINGTON – Lawmakers and tribal leaders berated the Bureau of Indian Education on Thursday for a school reopening plan that prioritizes in-person learning, despite tribes’ opposition to the plan in the face of COVID-19 health concerns.

When the BIE released its “Return to Learn!” plan in late August, it was “in effect doubling down on the very position that drew strong criticism from Indian Country in early August,” said Joe Garcia, co-chair of an education subcommittee for the National Congress of American Indians.

Garcia and other witnesses also told the House Natural Resources subcommittee hearing that they were left with less than a month to prepare for a Sept. 16 in-person reopening date after the BIE guidelines went out in late August.

The Bureau of Indian Education did not send a representative to the hearing because it was being held virtually, said Rep. Ruben Gallego, D-Phoenix, a move he sharply criticized.

“It is a dereliction of the federal trust responsibility for the BIE to refuse to be here to discuss how to protect Native students just because the hearing isn’t happening in person,” said Gallego, the chairman of the subcommittee.

The agency first told tribes on Aug. 6 that it planned to reopen the 55 BIE-operated schools on Sept. 16, using school buildings “to the maximum extent possible.” The letter also said remote learning could be allowed in areas that experience increased COVID-19 spread.

Another 128 schools that receive BIE funding but are tribally run were allowed more flexibility, but were still supposed to use the agency’s recommendations as a guideline for reopening. The BIE-run and BIE-funded schools combined serve more than 40,000 students in 23 states.

Rep. Pete Stauber, R-Minn., the sole Republican to speak during the hearing, quoted an American Academy of Pediatrics report that schooling decisions “should start with the goal of having students physically present in school.”

That report also warned against prematurely reopening schools, but Stauber focused on the overall claim that in-person learning is better than remote education and that remote learning disproportionately affects already-disadvantaged groups.

No one in the meeting disagreed, but they all testified that in the current pandemic, tribal leaders’ concerns for the health of their communities should take precedence.

The latest plans cap months of missteps by BIE, critics said, beginning in spring when the agency moved slowly to close schools, a move Gallego said ended with the deaths of some school employees.

Sue Parton, president of the Federation of Indian Service Employees, said her members also faced a lack of information or “mixed messaging” from officials in the spring.

“They were getting guidelines from the federal government and as federal employees, they felt compelled to follow the guidelines of the federal government, but then they would get a different set of guidelines from the state governor wherever their school is located,” Parton said. “And quite often, they would get other guidance from the tribal leaders, if they were located on or near a reservation. So they started calling the union saying, what do we do? Who do we follow?”

Gallego said such “hiccups may have been understandable in March,” but he called it “disturbing that we’re seeing those same problems arise in September, when BIE has had months to prepare.”

Lance Witte, superintendent and principal of Lower Brule Schools in South Dakota, said his BIE grant-funded schools were able to reopen this fall using a hybrid model only because they had put their plan in place “long before the guidelines were released, based on conversations with tribes and local public schools.” That plan calls for the majority of students learning remotely at any given time.

Lower Brule’s hybrid model is only possible because the school “took a very aggressive move,” using CARES Act funding to install broadband for school families. But even that plan was delayed when the district did not receive the funding until June 29 – a reminder of the chronic underfunding of BIE schools, Witte said.

“Unfortunately, this pandemic-related impact merely compounds the annual funding crisis we face because of federal underfunding,” he said.

Rep. Raul Grijalva, D-Tucson, pointed to that underfunding as evidence of the “second-class status given to the 42,000 students that utilize BIE.”

“The hardest-hit, most impactful in terms of infection and mortality per capita has been in Indian Country, and yet we’re being asked to rush this,” Grijalva said of the BIE’s reopening plan.

Gallego said BIE is welcome to come back and defend its plan any time it wants.

“We understand the stakes of the public health crisis we’re in,” Gallego said of the decision to hold a virtual hearing. “From the refusal (to appear), it’s clear that the BIE does not understand those stakes, which is why I’m extremely concerned about their ability to oversee safety openings at BIE-run schools this fall.”