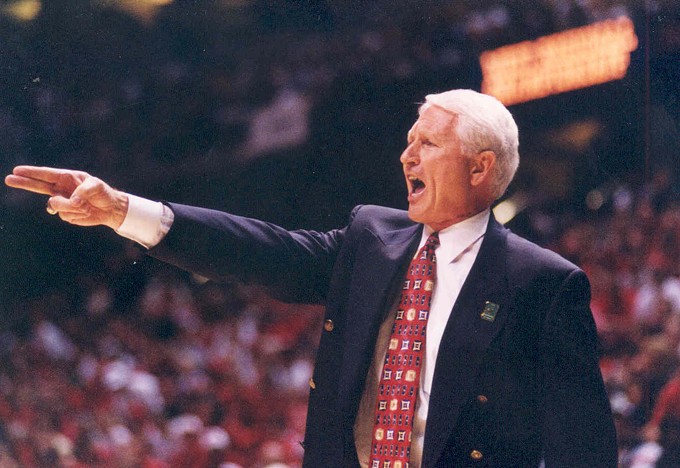 There is no way to overstate what Olson did for the University of Arizona, its basketball program, the city of Tucson, and the state of Arizona. He was a towering basketball god, recognizable worldwide for his physical stature, his steely presence on the sidelines, and, most notably, for his perfectly coiffed silver hair. Through work ethic and excellence, he brought status and pride to the community and he was absolutely beloved for his efforts. In a country with several huge metropolises in which an urban sport like basketball can flourish, it’s remarkable that the three meccas of the collegiate sport are Durham, North Carolina; Lexington, Kentucky; and Tucson, Arizona.

Even more than a decade after he stepped down, when a kid in Ivory Coast or Costa Rica, Budapest or Singapore picks up a basketball, they know about Arizona. It’s a legacy well-earned and one cherished by Tucsonans.

Olson took a circuitous route to Arizona after starting his coaching career as a high-school coach in Southern California. It’s rare, but not totally unheard of, for a prep coach to make the leap to a major-college job. He started out coaching high school ball in Minnesota, the state in which he had graduated from Augsburg College. While at Augsburg, he played four years of football and basketball (going by “Luke” Olson). His senior year, he even played a season of baseball and was named the school’s athlete of the year.


After coaching for a few years in Minnesota, he took a year off from coaching to become a school counselor in Boulder, Colorado. He would shake his head and roll his eyes when recalling that year, as though unable to believe that he would ever spend an entire year away from basketball. He and his wife of 47 years, Bobbi (whom he had married when he was a sophomore in college) would then move on to Southern California, where he started off coaching a freshman team. Within a couple years, he had grabbed a varsity job at Marina High School in Huntington Beach.

He was a powerhouse prep coach, but he wanted more. When the job opened up at nearly Long Beach City College, he grabbed it. Junior college positions are more likely to be dead-end jobs rather than stepping stones, but it’s an understatement to say that Olson made the most of it. Despite being told by his athletic director that his recruitment was restricted to the Long Beach area, Olson went 104-22 in four seasons, even winning the State JC championship in 1971.

Meanwhile, a man named Jerry Tarkanian was making a name for himself as the head coach at Long Beach State. Tarkanian had pulled off the recruiting coup of the decade by luring one of the top prep players in the country, Ed Ratliff, to unheralded Long Beach State. (The details of that particular recruiting violation are stunning.) Tarkanian built Long Beach State into a national power, then took the job at UNLV, getting out of town about a half-hour ahead of NCAA investigators.

Long Beach State offered the job to Olson and assured him that everything was fine with the NCAA. Olson coached Long Beach State one year, going 24-2 and reaching as high as No. 3 in the national polls, right behind the Bill Walton-led UCLA Bruins. But midway through the season, the NCAA hammer came down and Long Beach State was hit with a three-year probation that included a ban on post-season play.

Olson felt that he had been lied to by the Long Beach State administration and so he left after one year, taking the job at the University of Iowa, a team that had finished dead last in the Big 10. In only his second year, the Hawkeyes went 19-10. In the 1978-79 season, Iowa won the Big 10 title and made their first of five consecutive trips to the NCAA Tournament. They even made it to the Final Four, but their title hopes were dashed when star player Ronnie Lester re-injured his knee in the first half against eventual champion Louisville.

It was the first of what would become multiple occasions when an Olson-coached team would be talked about in woulda/coulda/shoulda terms concerning a possible national championship. After nine seasons (and a record of 167-91) at Iowa, Olson shocked the basketball world by taking the job at lowly Arizona in remote Tucson. Over the years, Olson would use two standard lines when asked why he made the move. One was that he felt like he was living in a fishbowl at Iowa and the other, more lighthearted explanation was “Have you ever spent nine winters in Iowa City?”

Arizona, which had enjoyed some NCAA success under Coach Fred Snowden in the late 1970s, had fallen on hard times. Under one-year coach Ben Lindsey, the Wildcats had gone 4-24 and only an unexpected win the season finale kept the team from going 0-18 in Pac-10 play.

I first met Olson not long after he arrived in Tucson. I was going to interview him for a magazine, but being a stay-at-home father to my daughter at the time, I was hoping to do the interview over the phone. However, Coach Olson invited me to his office and off I went, 2-year-old daughter in tow. She sat on the floor of his office with a coloring book and crayons while I talked to Olson.

I started things off by mentioning my uncle, Alfonso DiMarco, who was the football coach and athletic director at a high school in West Des Moines. While coaching at Iowa, Olson had recruited one of his best players, Bobby Hanson, from that school. His eyes lit up as he said, “Oh, Al DiMarco! What a great guy!”(He actually talked like that; I once heard him use the word “swell” as an adjective.)

After the interview was over, he got out from behind his desk, knelt down on the floor, and asked Darlene if he could help her finish that one page. He went to grab a crayon, but Darlene handed him a specific color and he went at it. Not surprisingly, he was really good at coloring inside the lines.

I’d see him over the years and he was always cordial, very friendly. One time, a full 20 years after the interview, I ran into him and he said, “Say, how’s Darlene doing?” I couldn’t believe that he would remember her name. (I sometimes called her “Hey, you!”) When I told him that she was at Cornell getting her Master’s in Engineering, he said, “I’ll bet she colors inside the lines now.”

Even looking back after all these years, the results were stunning. Using a patchwork lineup built around junior-college transfers, Olson took Arizona to the NCAAs in only his second year. It would be the first of 23 consecutive trips to the Big Dance. The next year, Arizona won the Pac-10 title and two years after that, the Cats were ranked No. 1 in the country for much of the season before suffering a heartbreaking loss in the Final Four. That team was built around All-American Sean Elliott, a stringbean of a kid who wanted to be a baseball player and later played high-school soccer.

It also featured Steve Kerr, a kid that no other college recruited. Olson saw that the NCAA was going to adopt the three-point line and he recognized the value of an outside shooter of Kerr’s ability. Kerr would make All-American at the UA and would go on to play on several NBA championship teams before becoming a coach and winning even more NBA titles.

I ran into him in McKale one time and he asked how the girls basketball team that I coached had done in the previous season. I told him that we had reached the Final Four at State but playing in the empty and cavernous arena that’s home to the Phoenix Coyotes hockey team, my team had shot a dreadful 7-for-60 in the game. He gave me a “Yeah, we’ve all been there” chuckle as he said, “Shooting that badly, at least you didn’t suffer a close loss.”

When I told him that we had lost by 1, he gave me a different laugh, one that said, “Well, maybe we all haven’t been there.”

It’s almost impossible to state the impact that Olson had on the University of Arizona and Tucson. It’s so trite to say that “he put us on the map,” but after decades of Los Angeles being the center of college basketball west of the Mississippi, that focus shifted to Tucson, where it remains to this day, more than a decade after his messy, health-related retirement. It was later explained by his doctor than Olson’s first stroke (which had gone undiagnosed) had caused severe depression and impaired judgment.

Even after his retirement, he remained a fixture at Wildcat games, always taking the time to sign autographs and shake hands.

He leaves behind a body of accomplishments that will probably never be duplicated. He was Pac-10 Coach of the Year seven times (and Big 10 Coach of the Year once). He coached the U.S. National team to the FIBA World Championship in 1986. He led Arizona to five Final Fours and his 1997 team won the NCAA title. He’s in the Basketball Hall of Fame and the College Basketball Hall of Fame. There is a well-deserved statue of him in front of the basketball arena and the names of Lute and Bobbi Olson will forever adorn the court at McKale Center. Bobbi Olson died of ovarian cancer in 2001; the Cats would go on to reach the national championship game before losing to Duke.

He was an incredible figure, certainly the most-famous resident of his adopted city. He was revered in life and will be sorely missed in his passing. Tucson has lost a giant.