With Nearly All the Votes Counted, Here's How the Dust Settled in Pima County

As of this morning, Pima County has just a few thousand ballots left to count.

County Recorder F. Ann Rodriguez had completed signature checks on the ballots that arrived by mail and had shipped them over to the Elections Department to tabulate them.

Rodriguez still had about 3,000 provisional ballots to review.

Given the small number of ballots left to count, it appears that every race in Pima County has been resolved except for the Ovo Valley Town Council, where third-place finisher Tim Bohen is leading fourth-place finisher Bill Rodman by just 74 votes. 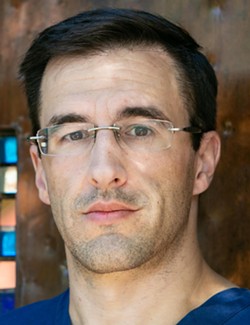 Kathleen Dreier/Courtesy Team Heinz
In primary night's biggest upset, former state lawmaker Matt Heinz defeated Pima County Supervisor Ramon Valadez, who had served on the Board of Supervisors since 2003.
In what remains the biggest shocker of the primary election, former state lawmaker Matt Heinz has knocked out Pima County Supervisor Ramon Valadez, who has served on the board since he was first appointed in 2003. Heinz, who also works as an emergency room doctor, captured 53 percent of the vote to Valadez’s 34 percent in District 2, which stretches from downtown Tucson to Sahuarita.

In the general election, Heinz will face Republican Anthony Sizer, who has previously run unsuccessfully for the Arizona Legislature.

In District 5, TUSD Board member Adelita Grijalva, daughter of Congressman Raul Grijalva, defeated Sunnyside School Board member Consuelo Hernandez. Grijalva, who captured 67 percent of the vote, will face Republican Fernando Gonzales in the race for the board seat formerly occupied by the late Richard Elias.

In District 4, Supervisor Steve Christy defeated challenger John Backer in the GOP primary with 65 percent of the vote. Christy will face Democrat Steve Diamond in this GOP-leaning district that includes Tucson’s east side, Vail and Green Valley.

Democrat Laura Conover faces no opposition in the general election for Pima County Attorney after winning Tuesday's primary.
In countywide races, Laura Conover won the Democratic primary for Pima County Attorney. The defense attorney captured 58 percent of the vote against two prosecutors who were seeking the office, Jonathan Mosher, who won 36 percent, and Mark Diebolt, who captured 6 percent.

In the Democratic primary for Pima County Sheriff, Chris Nanos, who was appointed the seat in 2015 but lost it after a procurement scandal erupted on his watch, captured 67 percent of the vote against Deputy Kevin Kubitskey, a union leader whose campaign erupted in scandal in July after his daughter accused him of abusing her.

Nanos’ win sets up a rematch against Republican Mark Napier, who defeated Nanos four years ago.

In the race between two Democrats who are seeking to replace the retiring F. Ann Rodriguez as Pima County's chief keeper of records, Gabriella Cázares-Kelly, an organizer with Indivisible Tohono, won 64 percent of the vote against Kim Challender, who has worked as Rodriguez’s chief deputy.

Cázares-Kelly will face Republican Benny White, a longtime GOP activist who has served on the county's Election Integrity Commission.

In the primary to replace the retiring Assessor Bill Staples, Suzanne Drobie won 58 percent of the vote against Brian Johnson and Dustin Walters. She faces no Republican opposition for the seat.