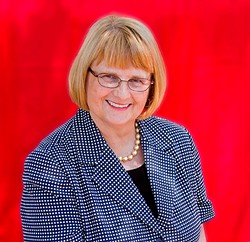 Courtesy photo
Democrat Andrea Dalessandro may have reached her term limit in the state Senate, but she can start all over again in the state House of Representatives.
In the competitive primaries in state legislative districts, incumbents held off challengers.

These early returns represent the early ballots that were tabulated as of today. Throughout the evening, we’ll update as today’s ballots are tabulated. More results are expected in the coming days as the Pima County Recorder’s Office validates more early ballots.

In the Democratic primary for the Senate seat in Legislative District 11, retired Marine Joanna Mendoza has captured 57 percent of the vote, while former high school teacher and school administrator Linda Patterson has 43 percent.

The winner of the race will face Sen. Vince Leach, the Republican incumbent who did not face a primary race.

The district includes Oro Valley, parts of Marana as well as areas of Pinal County and the town of Maricopa.

In the Democratic primary for the two House seats in Legislative District 2, state Rep. Daniel Hernandez is leading the ticket with 32 percent of the vote.

Meanwhile, Andrea Dalessandro is in second place with 30 percent of the vote as she attempts to move to the lower chamber after she reached her term limit in the state Senate.

Army veteran and attorney Luis Parra was coming in third with 19 percent of the vote. Former ACLU attorney Billy Peard is in fourth with 17 percent.

The incumbents were leading with the release of the first batch of early votes in Legislative District 3, which covers Tucson’s west side. Rep. Alma Herndandez had 46 percent of the vote and Rep. Andrés Cano had 37 percent of the vote, while challenger Javier Soto had 17 percent.

In the three-way race for two House seats in midtown Tucson’s Legislative District 10, Rep. Domingo DeGrazia was leading in early returns with 41 percent of the vote as he seeks reelection. Stephanie Stahl Hamilton had captured 36 percent of the vote for second place, while union leader Paul Stapleton-Smith was in third with 21 percent.