Danehy: Push Back the Start of High School Sports 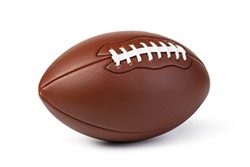 An Open Letter To Governor Doug Ducey and David Hines, Head of the Arizona Interscholastic Association:

There are few things more important to a high-school athlete that his/her senior season. It is the culmination of years of preparation and it generates memories that last a lifetime. But now, due to a coronavirus pandemic that hasn’t been properly addressed throughout this country, untold numbers of Arizona’s high-school athletes are in real danger of suffering the same fate as the Spring athletes in the Class of 2020—the cancellation of sports and a gaping hole in their high-school experience.

There were ideas floated about flip-flopping Fall sports (football, volleyball, and others) with Spring sports (softball, baseball, track & field), with the thinking being that the latter are almost completely non-contact and would be safer while the pandemic was still active (or raging, as the case may be). This didn’t sit well with baseball coaches, whose players already lost last season and stood a good chance of losing the 2020-21 season, as well, should there be another flare-up. Some football coaches have signed a petition, asking that their seasons be moved.

There’s a better solution: Just move everything back.

Spend the next couple months starting the educational process, with the focus on getting kids back into school when it is safe to do so (for both students and teachers). Assume that science will come to the rescue with a vaccine late in this calendar year (and that there are enough people who aren’t crazy anti-vaxxers); it should be safe to start preparing for sports sometime after Thanksgiving.

This is not totally unprecedented. High-school baseball teams in Iowa have been playing their seasons in the summer for decades. An athlete’s senior year actually extends past graduation. They do it out of necessity and it works out just fine. They’ve been doing it for nearly a century. We in Arizona would only have to do it for one school year.

There will be inevitable pushback, much of it from the vultures who inhabit club sports. But this would be a one-time deal, a reaction born of necessity in response to a once-in-a-century (we hope!) nightmare. It would not be perfect, but it would work. It would show that the State of Arizona and the AIA have the student-athletes’ best interests at heart, allowing for competition in a safe and non-haphazard manner. It would maintain the natural order of things (just pushed back a few months) and give young people the opportunity to make those memories of a lifetime.

On their way north, pregnant migrants brave a harrowing jungle crossing in Panama

Danehy: Tom Rounds Up The Latest Outrages At The Arizona Legislature

Danehy: Arizona Republicans are getting so radicalized they could soon be as irrelevant at the California GOP

Danehy: Teachers shouldn’t be forced to return to the classroom until it’s safe to do so