The total number of confirmed coronavirus cases in Arizona climbed past 148,000 as of Tuesday, July 21, after the state reported 3,500 new cases this morning, according to the Arizona Department of Health Services.

A total of 2,918 people have died after contracting the virus, including 391 in Pima County.

Hospitals remain under pressure, although they report in slight decrease in the number of Arizonans hospitalized with COVID-19-related symptoms. The report shows that 3,041 COVID patients were hospitalized yesterday in the state, down from a peak of 3,517 on July 13 and the lowest number hospitalized since July 2, when 3,013 people were hospitalized. 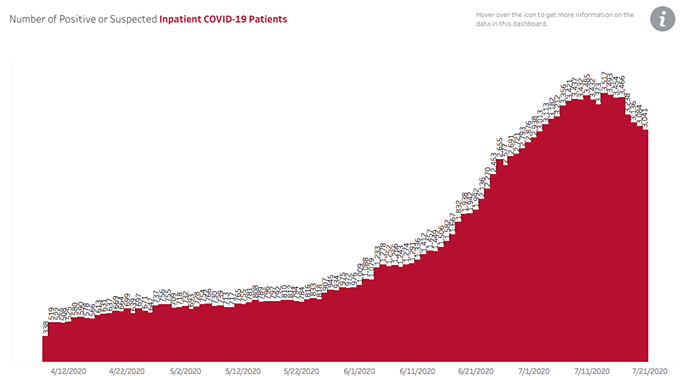 AZ Dept of Health Services
The number of people hospitalized with COVID-19 complications has begun to drop but remains high.

Citing a drop in the total number of cases on a week-to-week basis, Gov. Doug Ducey said last week that mask-wearing and steps to reduce the interaction of people in large groups had resulted in some positive signs regarding the spread of the virus.

But Ducey warned the state still had a long road ahead in the fight against COVID-19.

"There will be no victory laps," said Ducey, who praised measures set by local authorities to require masks were helping to reduce spread, but once again stopped short of a statewide mandate.

The looming question this week: Is it safe to reopen Arizona’s schools and universities next week? Ducey said at last week’s press conference that he was in conversations with school leaders and university presidents about the best way to move forward with the school year. Many school officials are anticipating an announcement this week from Ducey regarding a further delay in starting the school year.

While Arizona schools are tentatively scheduled to open on Aug. 17 (with some districts starting online programs sooner), Ducey said he would be meeting with Arizona Superintendent of Public Instruction Kathy Hoffman and other state educational stakeholders in hopes of providing more complete information on the gameplan for reopening schools.

“I know people want clarity around this and we’re going to provide clarity,” Ducey said. “I’m going to tell you our kids are going to be learning in the fall.”

Some public health experts say that community transmission is too widespread to safely open the schools as planned. Will Humble, executive director of the Arizona Public Health Association, recently warned that while states that have taken more aggressive steps earlier to slow the spread of the virus will be able to reopen schools, he can’t see the same thing happening in Arizona.

Tucson Unified School District will launch online classes for all students starting Aug. 10 but in order to avoid losing state funding, schools will open on Aug. 17 for any student who wants to attend class in person. However, students will be in "learning spaces" where they will do the same distance learning program that students who remain home will experience. Teachers may or may not be in the classroom, which may instead include a monitor to keep an eye on the students who are in the room. All TUSD families will receive laptops.