CHAPTER 4
The Fallout
Theresa Medina Thomas’ body sat in the Trailblazer in the middle of the street, blocked off by yellow caution tape and police vehicles, for nearly 12 hours before it was transported to the medical examiner’s office.

Only later, after an autopsy and toxicology report, was it revealed that she had near-fatal levels of methamphetamine in her body, which could have explained much of her driving behavior.

“What am I going to do? I mean, it’s me against them. These are federal agents; it’s federal government.”

Dr. Richard Stripp, a toxicology professor at John Jay College of Criminal Justice who analyzed the toxicology report for the Howard Center, said the HSI agents’ description of the driver’s actions would be consistent with someone high on meth.

“The effect of methamphetamine would be related to increased risk-taking behavior, more aggressive behavior, potentially erratic driving,” said Stripp, a forensic toxicologist who has consulted on numerous cases. “They may speed, they may run red lights.”

High levels of stress would “magnify the effect” of any drug, Stripp added, as well as increase “the fight or flight response.”

Medina Thomas was on supervised probation for previous charges related to human smuggling, although HSI agents weren’t aware of that at the time of the shooting.

Her mother, Tina Juan, said Medina Thomas “went downhill” after the death of her paternal grandmother, with whom she was very close.

After the shooting, Juan said she met with federal prosecutors and was surprised to learn they were considering the death penalty for Jose in the death of her daughter, even though the bullets that killed Medina Thomas were fired by HSI agents.

She gave up hopes that agents would be held accountable, she said, after prosecutors told her the shooting was justified.

“What am I going to do? I mean, it’s me against them. These are federal agents; it’s federal government.”

Juan now is raising her eldest child’s 12-year-old daughter. She and members of her family plan to visit the site in Ahwatukee on the first anniversary of the shooting. 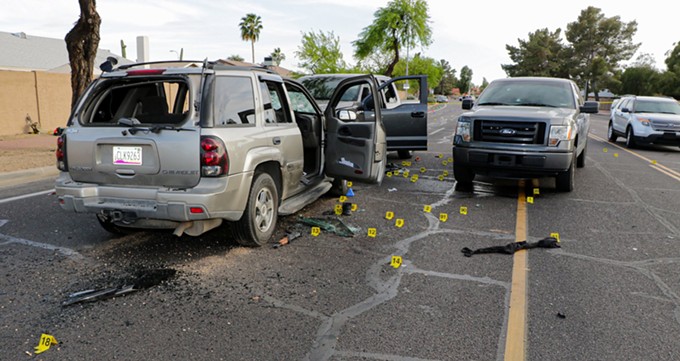 Valentina Valenzuela is in custody at the Tucson Federal Correctional Institution, facing charges of transportation of illegal immigrants for profit resulting in death and endangerment.

Her attorney says Valenzuela is “dealing with grief and PTSD from the circumstances of this offense,” according to a July court transcript.

Jose and Valenzuela will be tried in U.S. district court in Tucson in the coming months. They both have pleaded not guilty.

The two undocumented immigrants in the Trailblazer – Maria Martinez-Luna and Genaro Jiménez-Sánchez – were detained by the U.S. Marshals, according to court records.

Martinez-Luna requested a work permit “and the Government is anticipating granting that request,” court records show. It is unclear whether she will be asked to testify in the case.

Jiménez-Sánchez, who had a bullet lodged in his chest from the shooting, is being held in federal custody until he can testify about what happened.

Defense lawyers have sought copies of HSI policies and procedures, contending in court filings “that the intervening acts of HSI agents, such as colliding with Mr. Jose’s vehicle and shooting Ms. Medina-Thomas, were the actual causative acts of her death.”

Prosecutors called that “a ‘fishing expedition’ with the hope of obtaining evidence to distract from the actions of the defendants in this case.”

“It's been the persistence and the number of controversial shootings that has kind of just created this situation where many chiefs felt like they had no choice but to, to adopt these recommendations,” White said. “What it would take for that level of scrutiny to reach federal agencies? I'm not sure.”