(Photo courtesy of Nick Dalton)
Federal law enforcement shootings have escaped the kind of scrutiny that gave rise to the local policing reforms of the Black Lives Matter movement.

One such agency is ICE’s Homeland Security Investigations, whose agents have been involved in shootings nationwide. Most of the victims have been black, Hispanic or Native American, according to the Howard Center for Investigative Journalism.

PHOENIX – First came the crash, reverberating off the walls of the retirement community like a “mini atom bomb,” then a barrage of gunfire shattered the desert morning calm.

Neighbors working in their garages and gardens scrambled for cover as rounds ripped through metal and cut into picnic tables. One woman hit her bedroom floor and called 911. Workers at nearby schools and day care centers worried whether they should go on lockdown.

“It was a war zone,” said Frank Guy, who was in his yard in the Ahwatukee Foothills neighborhood when the shooting started. “I haven’t heard that much rapid fire in that short of a period of time since I was in Vietnam 50 years ago.”

Federal agents from Homeland Security Investigations (HSI), a division of U.S. Immigration and Customs Enforcement, were pursuing a suspected human smuggler they’d been tracking for days. In three unmarked pickups, four plainclothes members of HSI’s Special Response Team followed the suspect’s SUV as it exited Interstate 10 south of Phoenix, took an unexpected turn and headed into a community of neat stucco homes and walking trails.

As the convoy barreled through the neighborhood, the agents decided to conduct a high-risk maneuver intended to force the SUV to stop. Instead, within seconds, an HSI pickup lay atop a downed tree halfway through a garden block wall, the driver of the SUV was dead from multiple gunshots, and her four passengers, including the alleged smuggler and a teenage girl, were wounded or injured. 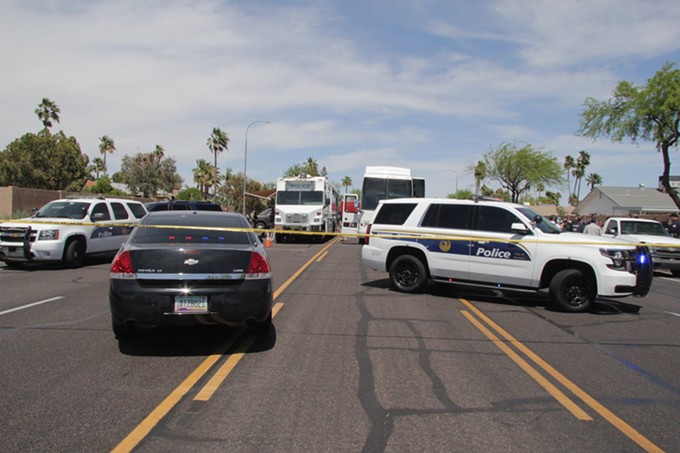 Phoenix police cordon off the scene shortly after the shooting involving agents of Homeland Security Investigations (HSI). Marked police cruisers, unmarked law enforcement and first responder vehicles block the neighborhood thoroughfare. (Crime scene photo: Phoenix Police Department)
The April 11, 2019, shootout in Ahwatukee, although extreme, was not an isolated incident. Since 2011, there have been at least 13 shootings involving HSI agents – most in 2018-19, according to an investigation by the Howard Center for Investigative Journalism. Reporters found media reports on other HSI-involved shootings, but could not independently confirm the details and did not include them in the count. It’s not clear how many HSI shootings have occurred in the U.S. because ICE officials refused to answer questions and the agency’s data is not made publicly available.

The Howard Center also found that at least five people had been killed and 11 others, including a 4-year-old boy, had been wounded or injured by HSI agent shootings, which often occurred in parking lots outside strip malls or restaurants. All but three of the victims were black, Hispanic or Native American. One suspect in California was shot in the back, and an innocent man in the same state was mistakenly shot at after dropping off a child at school. Another man in Chicago, who was not a suspect, was wounded in his home, the Howard Center found.

HSI was created in 2010 and is the main investigative unit of the Department of Homeland Security, the parent agency of ICE. Its more than 7,000 agents have broad legal authority to investigate an array of cross-border crimes, from child pornography and human smuggling to art theft and financial crimes. Yet its operations are largely overshadowed by the department’s detention units and immigration roundups.

Furthermore, federal shooting incidents have escaped the kind of scrutiny faced by state and local law enforcement officers involved in shootings of unarmed black men, which gave rise to the Black Lives Matter movement and community policing reforms. Experts say that’s no accident: Federal agencies have hoarded their shooting data, making it nearly impossible for independent analyses of their policies and practices.

“A lot of (local police) departments are transparent,” said Geoffrey Alpert, an internationally recognized criminal justice expert who has studied high-risk police activities for more than three decades. “The federal government chooses not to be.”

What little is known about HSI operations comes largely from Department of Homeland Security inspector-general reports, which have criticized ICE for following an outdated use of force policy from 2004. Auditors have also faulted Homeland Security for inadequate oversight and management of its agencies, as well as not doing enough to minimize the risk of improper use of force. 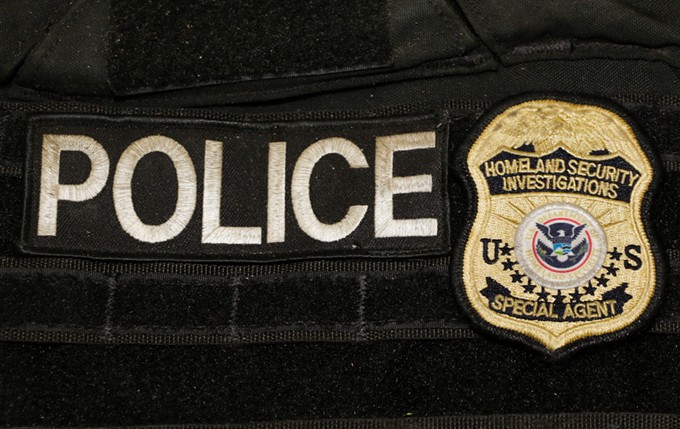 Closeup of a bulletproof vest worn by Homeland Security Investigations agents during the gunfight in Ahwatukee Foothills on April 11. (Crime scene photo: Phoenix Police Department)
The reports have also noted problems with training, challenges that were exacerbated in 2017 after President Donald Trump directed Homeland Security to hire 15,000 new agents and officers – 10,000 alone for ICE.

All this has raised questions about accountability. In every shooting examined by the Howard Center, HSI agents said they fired in self-defense. Internal investigations, if they occur, are not made public. No agent has been charged in any of the shootings, though one related civil rights lawsuit was settled out of court. Two other federal lawsuits are pending.

Common themes include HSI agents calling 911 for help after a shooting, refusing to answer questions at the scene, leaving without conducting walk-throughs with local police and giving statements only days later with their lawyers present.

Officials from ICE and HSI refused repeated requests from Howard Center reporters for interviews or to answer written questions.

The Phoenix Police Department, in response to a public records request, released its full investigative report on the Ahwatukee shooting, including 911 calls, body cam videos, agent and suspect interviews, and thousands of crime scene photos.

However, one piece of evidence that was released — recorded sounds of the shootout picked up by a nearby home security system — was not analyzed by police. A review of that recording, conducted for the Howard Center by two national ballistics experts, found that handguns like those used by HSI agents were the first to fire, contradicting the official narrative that the “bad guy” shot first.

Phoenix police officials would not publicly discuss their investigation, although privately some officers were critical of HSI’s tactics.

The prosecuting attorney for Maricopa County, which has jurisdiction for the Phoenix area, also criticized agents in writing for refusing to follow protocols for officer-involved shootings, saying that limited “the degree to which involved agents can be fully and confidently cleared of any wrongdoing.”

HSI agent-involved shootings elsewhere around the country are sometimes documented in local police records, or in court proceedings and civil rights lawsuits. But investigations, if they occur, are not always made public or are limited in scope, leaving many unresolved questions.

“It’s a major concern, the accountability of people who have the power to deprive us of life and liberty,” said George Kirkham, criminology professor-emeritus at Florida State University who has consulted on more than 1,500 law enforcement cases. “It’s an honorable profession, and the people who do it do a tough and important job. But they must be held to account.”