The total number of confirmed coronavirus cases in Arizona climbed past 138K as of Friday, July 17, after the state reported 3,910 new cases this morning, according to the Arizona Department of Health Services.

A total of 2,583 people have died after contracting the virus.

Hospitals remain under pressure. The report shows that 3,466 COVID patients were hospitalized yesterday in the state.

A total of 944 COVID-19 patients were in ICU beds yesterday.

Gov. Doug Ducey said yesterday that mask-wearing and steps to reduce the interaction of people in large groups had resulted in some positive signs regarding the spread of the virus. He cited a slight drop in the percentage of people visiting emergency rooms exhibiting COVID-like illness in the last week, as well as a drop in the total number of cases on a week-to-week basis (although all test results may not be in yet for tests in recent days). 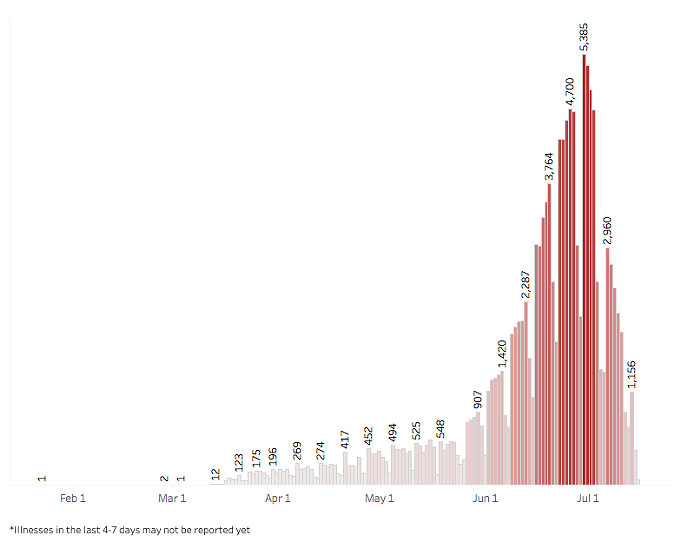 AZ Dept of Health Services
Arizona's epic-curve is seeing a decline in the number of cases reported by day, although all data from recent days is not yet available.

Ducey also said Arizona R-naught number—or the number of people with the virus who are infecting other people—dropped to .98 as of yesterday, meaning the infection rate has slowed. An R-naught of less than 1 means the virus is in decline.

But Ducey warned the state still had a long road ahead in the fight against the deadly virus. 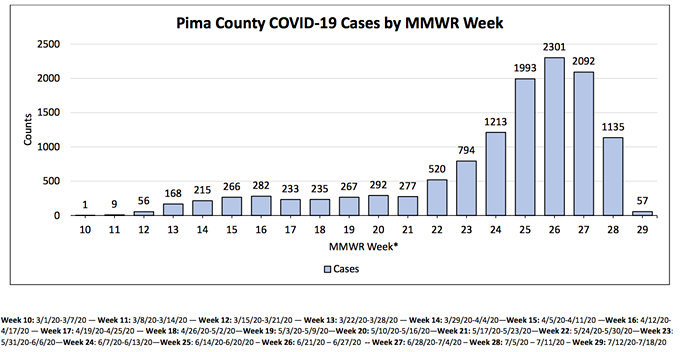 Pima County
The number of new cases may have peaked in Pima County following the issuance of a mask mandate, but it's a high plateau and numbers could still resume a climb if residents don't mask up, stay home as much as possible and follow other health advice such as frequent hand washing.
While coronavirus cases may be on a slight downward trend in the state, Ducey urged Arizonans to stay vigilant by staying at home and wearing masks while practicing social distancing when out in public to continue the fight against the virus.

"There will be no victory laps," said Ducey, who praised measures set by local authorities to require masks were helping reduce spread, but once again stopped short of a statewide mandate.

Ducey announced $650,000 would go to various community action agencies to improve staffing and help administer rental assistance programs for Arizonans statewide. Approximately $1.2 million in assistance has been distributed to Arizona renters since late March, according to the Governor's Office. Additionally, Ducey announced $5 million to establish the Foreclosure Prevention Program to help residential landlords dependent on rental income to survive.

“This will provide targeted relief to homeowners who rely on income from tenants to help them avoid foreclosure,” said Ducey, who added that state and local governments have directed more than $80 million on programs to assist renters and prevent homelessness.

The Senate Democrats' statement praised Ducey for extending the eviction moratorium "after significant pressure from legislators, Arizonans, and other advocates.

"No one should face homelessness in the middle of a pandemic and triple-digit heat," they wrote. "This is just one of the many measures Senate Democrats have been advocating for several weeks to help Arizonans."

But they said more aggressive action would be needed to allow schools to open next month.

“Arizona will be open for learning," Ducey said. "That is what’s in front of us in the coming school year. I know people want clarity around this and we’re going to provide clarity. I’m going to tell you our kids are going to be learning in the fall.”

While Arizona schools are tentatively scheduled to open on Aug. 17 (with some districts starting online programs sooner), Ducey said he plans on meeting with Arizona Superintendent of Public Instruction Kathy Hoffman and other state educational stakeholders in hopes of providing more complete information on the gameplan for reopening schools next week.

“We’re going to our best to conduct the positive educational year that we can and I’ll be providing the most specific guidance that I can,” Gov. Ducey said. “Expect that next week and that will provide additional flexibilities to our school around the state.

Some public health experts say that community transmission is too widespread to safely open the schools as planned. Will Humble, executive director of the Arizona Public Health Association, warned last week that while states that have taken more aggressive steps earlier to slow the spread of the virus will be able to reopen schools, he can’t see the same thing happening in Arizona.

Tucson Unified School District will launch online classes for all students starting Aug. 10 but in order to avoid losing state funding, schools will open on Aug. 17 for any student who wants to attend class in person. However, students will be in "learning spaces" where they will do the same distance learning program that students who remain home will experience. Teachers may or may not be in the classroom, which may instead include a monitor to keep an eye on the students who are in the room. All TUSD families will receive laptops. More details here.

In other COVID-19 news this week:

• Pima County has launched a new testing site at Kino Event Center. After the registration portal opened, this week's slots filled up in 10 minutes, according to a memo from Pima County Administrator Chuck Huckelberry. The testing and lab costs are estimated to reach $30 million to $40 million, which will come out of the county's portion of the federal CARES Act.

• Pima County announced last week that officials have contracted Maximus Health & Services, Inc. to boost contact tracing efforts in the region. Maximus is an outsourcing company that provides business support to government health agencies such as the Pima County Health Department. They will hire about 150 local residents to perform “extensive” contact tracing as directed by the health department, in order to “alert, educate and isolate” individuals who have come in close contact with a person who is COVID-19 positive.

• Finally, if you'd like a mask, the City of Tucson will give away roughly 56,000 washable ear-loop cloth masks this Saturday, July 18, in six locations across the city. The drive-thru mask giveaway will have a location in each of the city's six wards with about 8,000 masks available at each location. Individuals and families can drive up to the site and pick up as many masks as they need, while supplies last. You can also walk up or ride your bike through the line. This event is strictly for distributing masks and is not a COVID-19 testing site.

Individuals and families can go to any of the following locations between 7 and 10 a.m. this Saturday to pick up masks. 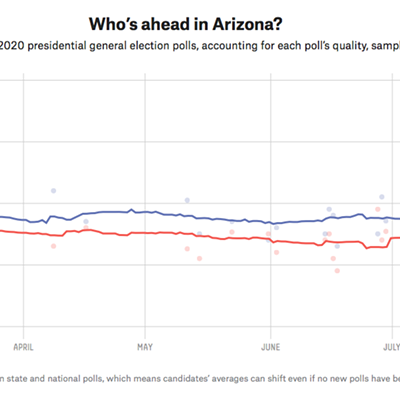