The total number of confirmed coronavirus cases in Arizona climbed past 123,000 as of Monday, July 13, after the state reported 1,357 new cases this morning, according to the Arizona Department of Health Services.

A total of 2,245 people have died after contracting the virus.

Hospitals remain under pressure. The report shows that 3,373 COVID patients were hospitalized yesterday in the state. 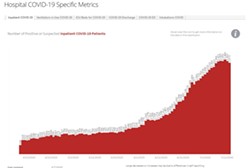 A total of 936 COVID-19 patients were in ICU beds yesterday.


Speaking of schools: Despite pressure from the Trump administration to open schools to all students as soon as possible, some local school districts have announced that they will only offer "distance learning" or online instruction when school starts next month. Unlike in spring, when schools moved online following spring break, districts are planning stricter instructional time designed to mirror traditional in-person classes.

TUSD will launch online classes for all students starting Aug. 10, with in-person classroom instruction delayed until "when it is deemed safe," according to a letter to parents from TUSD Superintendent Gabrielle Trujillo.

Catalina Foothills plans to launch a website with more details about their reopening plans today.

Correction: This story originally reported that Pima County's new testing system was a drive-thru site. It is indoors.